Barcelona are on a roll here. They have sold two world class players so far (surplus to requirements for them) and will use that money to sign Luis Suarez from Liverpool. And there could be few more exodus as well.

One of the players likely to leave the club is midfielder Alex Song. The 26-year-old joined Barcelona from Arsenal in 2012, but has failed to make any significant impression for the Catalan giants. He has failed to cement his position in the side as a midfielder while hasn’t been used regularly in the central defensive role as well. 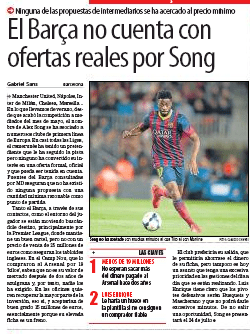 Last month, Catalan newspaper Sport reported that Manchester United are showing a interest in Song, who is keen to return back to the Premier League. Barcelona are demanding a fee in the region of €25m, or at least want to recoup the €19m they paid for him, but Mundo Deportivo says, not a single club are willing to match that asking price.

Chelsea and Manchester United are mentioned in the article for showing an interest in him, but it is highly unlikely that either of the two PL clubs will make a move for the Cameroon international in the summer.