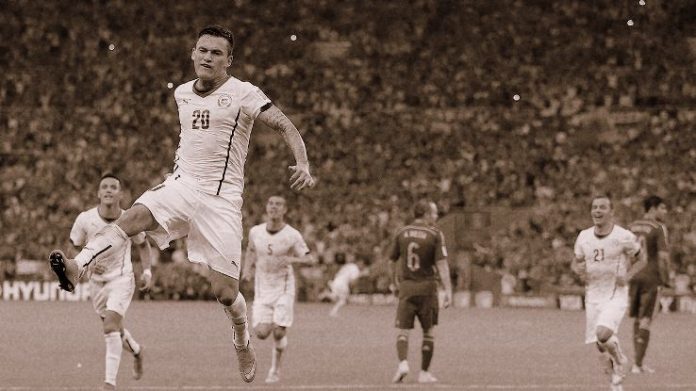 Chile midfielder Charles Aranguiz has said it would be a “dream” to play for Premier League giants Arsenal.

The 25-year-old midfielder plays for Brazilian club Internacional and has been recently linked with a move to the Premier League.

Aranguiz was in action at the Emirates Stadium on Sunday, as Chile lost 1-0 to Brazil.

When asked after the match to comment on his rumoured move to Arsenal, he said, as quoted by ESPN:

“They’re a great team, and it would be a dream but for now that’s all it is, a dream.

“I don’t know anything about it. I’ve heard about it through the press but nobody has talked to me.”

It remains to be seen whether Arsenal take any note of his comments, and make an official move for him in the summer. It always helps to sign a player who holds an ambition of playing for any particular club.

What might work in his case, is the presence of his national team-mate Alexis Sanchez, who has made a huge impact for the Gunners in his first season and can play a part in persuading the club to sign his compatriot.

Aranguiz has made 31 international appearances, scoring four goals that includes the winner at last summer’s World Cup in the 2-0 win over Spain.

The versatile midfielder, who can also play as a defensive, centre or even as a right wing midfielder, was considered one of the best midfielders in the Chilean Premier divisions while playing for Universidad de Chile.

Aranguiz has a good reputation for having attributes like impressive stamina, intelligent playmaking and good passing abilities, which might attract the Arsenal scouts, should they at all plan to sign him in future.