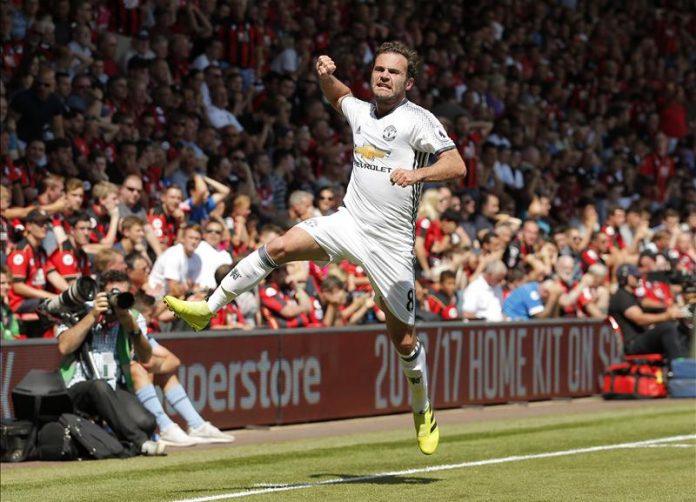 Manchester United start their 2016-17 Premier League campaign under Jose Mourinho with a convincing 3-1 victory over AFC Bournemouth on Sunday at the Vitality Stadium.

After a cagey start from both sides, United broke the deadlock just before halftime through Juan Mata. The Spaniard pounced on a double error from Simon Francis to tap home from close range.

Fails to run into Jose’s arms for the cameras. -5 points

1 – Juan Mata has scored a Premier League goal under Jose Mourinho for the first time. Leaf.

Wayne Rooney doubled the lead for Manchester United after the break. Anthony Martial’s miscued volley fell into the path of Rooney; the United skipper did brilliantly to guide the ball past Boruc with a finely timed header.

A goal to cap off what has been an excellent performance from Rooney ? https://t.co/Glh89Ji0El

Wayne Rooney scores his 87th away @premierleague goal, drawing level with Alan Shearer for most away goals in PL era pic.twitter.com/B3k4P7jbJk

Soon after, new signing Zlatan Ibrahimovic scored on his Premier League debut with a cracking effort from 25 yards out to put the game beyond doubt.

Oh my days. Zlatan Ibrahimović is just made for the Premier League. YOU BEAUTY. WELCOME.

All the pundits were saying Mata, Rooney and Ibrahimovic couldn’t play in the same team before kick-off. 3-0 now. Three scorers?

In the 69th minute, Adam Smith pulled one back for the hosts, firing into the top corner from 12 yards.