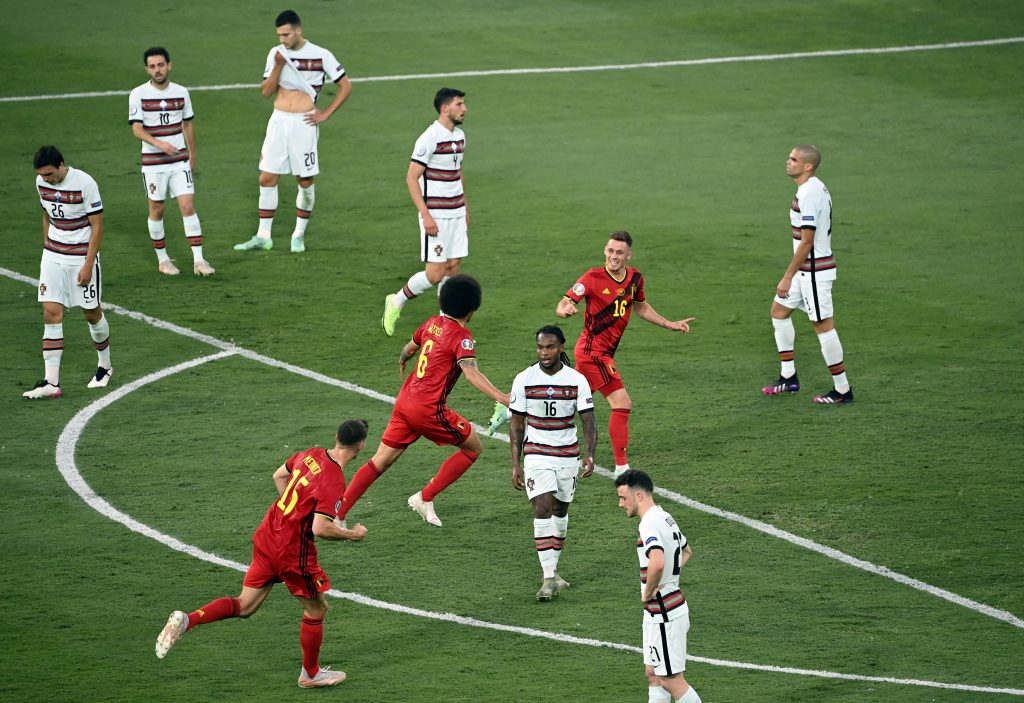 Belgium reached the quarter-finals of Euro 2020 after a tight 1-0 win over Portugal on Sunday.

The first chance of the game fell to Portugal, and they will have been disappointed with the end result.

For much of the first half, Belgium struggled to create anything of note, finding themselves limited to an ambitious effort by Thomas Meunier.

But they managed to take the lead shortly before half time in fine fashion. Thorgan Hazard picked up the ball from 25 yards out and unleashed a powerful strike into the far corner.

Although the ball moved in the air, Portuguese goalkeeper Rui Patricio will feel like he should have done better.

There was an early blow in the second half for Belgium when star man Kevin De Bruyne was forced off with an injury.

He hobbled off at half time after a challenge from Joao Palhinha and was substituted in the 47th minute.

Jota had another wonderful chance to get his second goal of the tournament but was off target again. Cristiano Ronaldo found the winger 12 yards out, but he struck over.

As the game approached the final ten minutes, Portugal began to crank up the pressure, with substitute Bruno Fernandes often the architect.

He crossed for Andre Silva, who headed over, and then swung in a corner for Ruben Dias, who headed straight at Thibaut Courtois when he really ought to have done better.

Moments later, they came within inches of equalising. Raphael Guerreiro drove forward and hit a right-footed shot towards goal but saw his effort bounce off the far post.

Belgium were clearly happy with the 1-0 scoreline and continued defending. They faced one last scare when Joao Felix shot wide from the edge of the box in injury time but managed to hold out for the victory.

Portugal crash out in the round of 16 for the second tournament running. As for Belgium, a strong Italy awaits them in the quarter-finals.

Thibaut Courtois (7/10) – Made a couple of important saves. Good distribution and handling from crosses.

Toby Alderweireld (7/10) – Contributed to a solid defensive display with some clearances and tackles.

Jan Vertonghen (7/10) – Part of a backline that held firm under a lot of pressure. Never crumbled.

Youri Tielemans (6/10) – Sometimes couldn’t deal with Sanches but was composed on the ball in midfield. Couldn’t control the game as he would have liked.

Axel Witsel (6/10) – Didn’t prevent the defence from coming under pressure but also didn’t get overrun.

Thorgan Hazard (8/10) – Scored a belter to win the game. Positive on the ball and reasonably strong defensively.

Kevin De Bruyne (6/10) – Wasn’t at his best in the first half, and was substituted with an injury early in the second.

Romelu Lukaku (7/10) – Was often feeding off scraps and didn’t have any goalscoring opportunities, but still caused problems with his hold up play. Showed good strength in the build-up to the goal.

Eden Hazard (5/10) – Still a long way from his best. Substituted late on with a hamstring injury.

Rui Patricio (5/10) – Rarely forced into action. Could have done better with the goal.

Diogo Dalot (6/10) – Showed a lot of attacking intent and got in some good areas. Final ball wasn’t good enough at times.

Ruben Dias (5/10) – Got bullied by Lukaku for the goal. Missed an excellent chance late on.

Pepe (6/10) – Also struggled against Lukaku’s physical presence, although rarely got beaten. Began to lose his temper in the second half.

Renato Sanches (7/10) – Had a very bright first half. Caused some problems in midfield with some driving runs through the middle.

Cristiano Ronaldo (6/10) – Didn’t have any chances of note. Created one for Jota and was always looking to make something happen.

Diogo Jota (4/10) – Missed two glorious chances to get on the scoresheet before being taken off in the 70th minute.