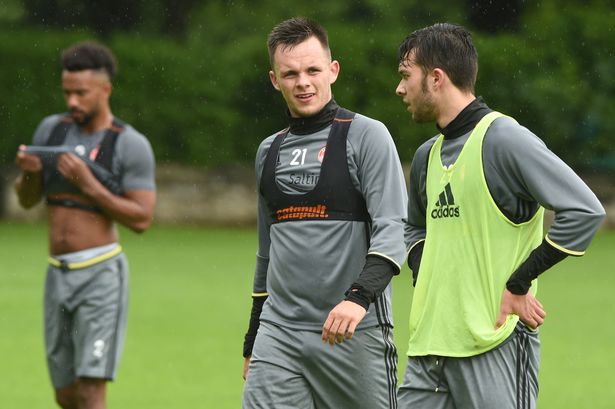 Glasgow Rangers boss Steven Gerrard has insisted that he will be looking to bring a striker to Ibrox in the January transfer window.

Alfredo Morelos has been in tremendous form this season, scoring 17 goals, but summer signing Kyle Lafferty has been very disappointing. And with Umar Sadiq now gone, the Gers must bring in a new striker to add depth and quality to the side.

Former Rangers player and club hero Barry Ferguson has spoken about Lawrence Shankland in his column for the Daily Record, saying he could be of interest to the Ibrox club.

Shankland is a boyhood Rangers fans, and his performance with Ayr United hasn’t gone unnoticed. He is in the form of his life, and has scored a remarkable 28 goals to fire his side to the top of the Scottish Championship.

The Daily Record claimed that Ayr want just £400,000 for their talisman who is out of contract at the end of the season.

Ferguson is impressed with his scoring record, but he doubts whether he can reproduce his goalscoring exploits at a higher level.

He hopes that Shankland gets a move, and says whether Rangers take that ‘gamble’ remains to be seen.

“One name on the lips of many Rangers fans is Lawrence Shankland after his staggering 28 goals to fire Ayr United to the top of the Championship,” wrote Ferguson for the Daily Record.

“With clubs in England linked with him, the question is whether he could reproduce his goalscoring exploits at a higher level but we’ll never know until he actually tries it.

“One thing I will say is that I admire him for dropping down a few levels after he had a difficult time at Aberdeen and after scoring for fun in the third tier he has maintained that in a difficult Championship.

“Shankland took a risk in dropping down and it could have backfired but he went away, even qualifying as a personal trainer, and has reaped the benefits.

“Ayr United won’t want to lose him but a guy scoring that amount of goals will attract interest and I hope he gets a move but whether that is Rangers or elsewhere I don’t know.

“It’s whether Rangers take that gamble or go for someone who is tried and trusted. Either way, Shankland would be one for January but what Rangers need right now is for other players to step up to the plate and ease the burden on Morelos.”