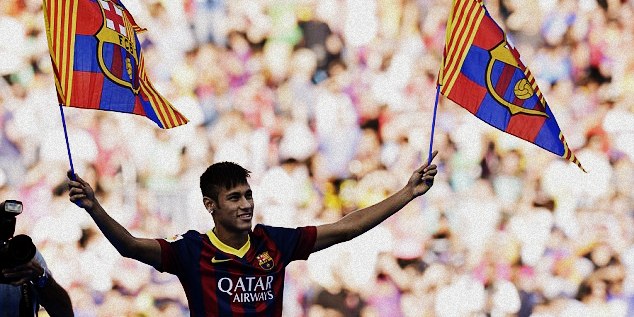 Neymar appeared for his medical examination on Monday and Barcelona revealed him in their 2013-14 home kit as he stepped foot on the Camp Nou pitch for the first time.

Until Sunday, it was reported that the transfer fee offered was around €28 million (£23.9 million) but the Catalan club conceded that interest from Real Madrid significantly drove up the transfer fee.

Barcelona managed to close the deal at €57 million (£48.6 million) making it the ninth highest transfer fee ever paid for any footballer. Only the following transfers cost more than Neymar:

In the months leading to this transfer, Brazil national team coach Luiz Felipe Scolari was quoted as saying that Neymar should stay in Brazil to ensure a first-team berth to have the best chance to prepare for the 2014 World Cup in Brazil.

It will be no surprise that Barcelona would have had to offer inflated wages to convince Neymar to move to Spain in addition to the promise of first-team football.

The next season, we’re either going to see a Barcelona that is reminiscent of the Pep Guardiola era or witness Lionel Messi and Neymar fail to form a partnership. 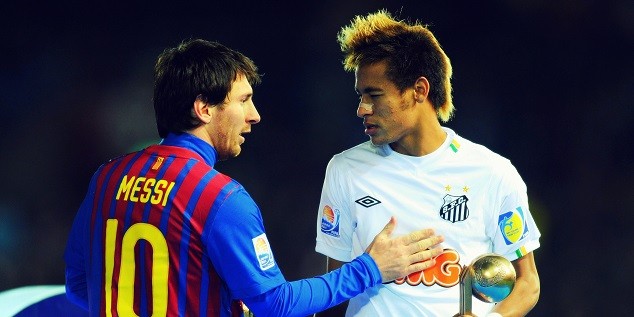 Although these are completely different circumstances but Barcelona has in its recent history made a big gamble which did not pay off as the transfer fee promised.

The transfer of Zlatan Ibrahimovic from Inter Milan is now valued at €69 million. The Swede played a single season at Barcelona and scored 16 goals but he was loaned out to AC Milan the very next season. Milan activated the €24 million purchase option at the end of the season and completed the transfer.

If Neymar fails to establish himself playing second fiddle to Messi, will the club go down the same road as they did with Ibrahimovic? Neymar may still end up in Madrid if Tito Vilanova is not able to devise a strategy that gives both Neymar and Messi the freedom to play.

As much as Barcelona needed a prolific goalscorer, they needed a strong central defender as well. The question is, how much is Sandro Rosell willing to spend for a centre back now that they have also paid €13 million to Roma for Bojan Krkic – taking their total expenditure this summer to €70 million.

Barcelona already have five forwards in their ranks – David Villa, Alexis Sanchez, Messi, Pedro and Cristian Tello. With the addition of Neymar and Bojan, Barcelona must be looking to sell one or two of their current forwards and perhaps cut down on some of the wage bill.

In defence, there is Dani Alves and Martin Montoya for the right back position, Jordi Alba and Adriano for left back (Barcelona did not renew Eric Abidal’s contract) and there are only Gerard Pique, Carles Puyol and Marc Bartra for centre back.

Javier Mascherano has been shifted to an almost permanent centre back role; gone are the days when Masch was marshalling the midfield at Liverpool. In the absence in any of these forced Sergio Busquets, Alex Song and Abidal to perform the centre back duties. 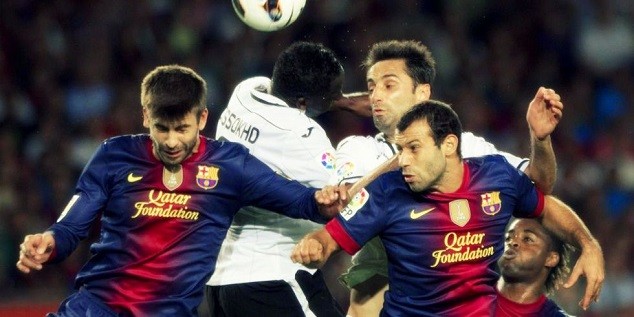 Barcelona was rumoured to be investigating the possibility of acquiring the services of PSG’s Thiago Silva or Borussia Dortmund’s Mats Hummels. Both central defenders have not given any signs of a possible move away from their respective clubs.

Which just drives the stakes higher for Barcelona. They will have to come up with a significantly large offer to convince the club to part ways with their defenders.

PSG paid €42 million for Thiago Silva last year and a price tag takes the Brazilian out of Barcelona’s means – considering their recent financial troubles and the €70 million transfer fees.

Hummels, on the other hand, Dortmund paid only €4 million to Bayern Munich in 2009 after a loan spell. Hummels has been an integral figure and his exit will leave a big hole in the Dortmund defence.

It has also been reported that Tito Vilanova is going to try Adriano in the centre back role. This could very well be true since Barcelona has shown no intentions of pursuing any central defender. We all know that Barcelona makes sure that everyone knows when they are pursuing a player.