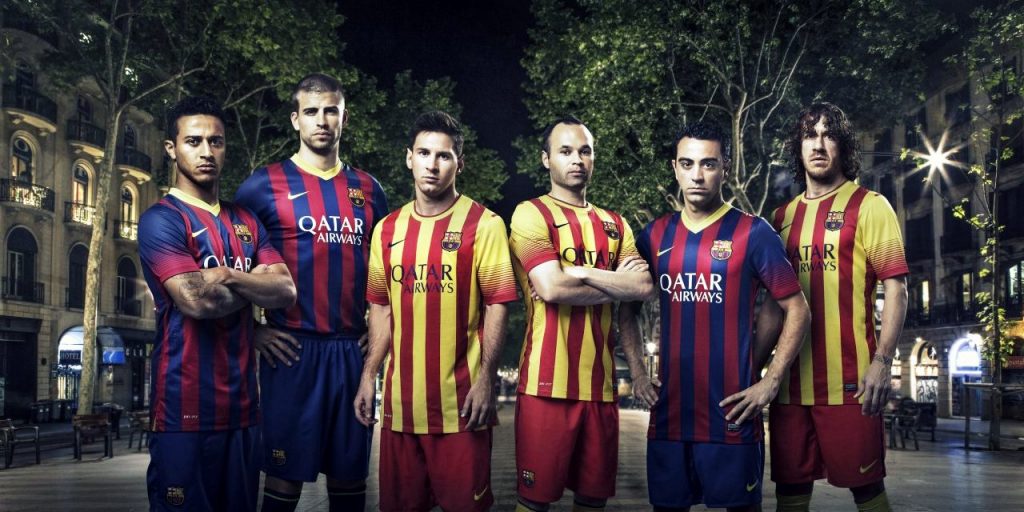 Nike have unveiled the new 2013-14 Barcelona kits and it turns out that the images leaked in April were indeed of the final Barcelona kit.

As the leaked images suggested, the home kit is striped and it carries four red and three blue stripes. The shirt has a yellow collar and blue sleeves that descend into red. The Nike Swoosh is in yellow while the new sponsor is in white.

The away 2013-14 Barcelona kits are a big improvement on the current Barca away kit – although it is still a combination of yellow and red. This time the two colours combine to form the red and yellow stripes of the Catalan flag.

The away shirt has four red and five yellow stripes. The collar and sleeves are also yellow but the sleeves descend to turn into red. The sponsor logo and the Nike logo are in black.

There is no official news on the colour or design of the third 2013-14 Barcelona kit but the leaked images suggested another black third kit this season.

The Catalan giants reclaimed the La Liga trophy this season but the manner by which their march towards Champions League glory ended, Barcelona will surely been looking to regroup and find reinforcements for their current team.

If the reports in the press are to be believed, David Villa and Victor Valdes are set to leave the club this summer and both could very well end up in England. Barca are said to be interested in the young prodigy of Neymar and his Brazil national teammate Thiago Silva who won Ligue 1 with PSG this season.

Also on the club’s books, is the Borussia Monchengladbach goalkeeper Marc-Andre ter Stegen – a 21-year-old Germany international who is touted to be as good as, if not better than, Bayern Munich shot-stopper Manuel Neuer.

Follow this link for more news on 2013/14 kits or head over to the Soccerlens Store to purchase the latest kits of any of the biggest clubs in Europe or international teams.