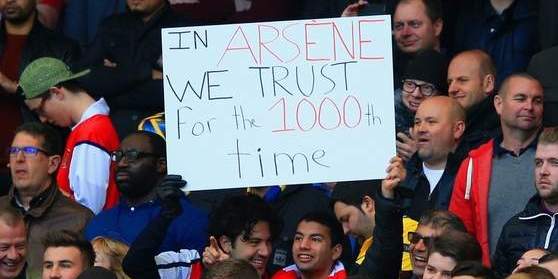 Arsenal’s home tie against Swansea tomorrow evening will be a true test of the Gunners’ mettle, with Arsene Wenger’s 1001st game in charge at the club holding even more meaning than the reaching of the century milestone at Stamford Bridge on Saturday.

The extent of the damage inflicted by Jose Mourinho’s side in the 6-0 win on the weekend remains to be seen, with the psychological implications for Arsenal potentially devastating for a side perceived to be challenging for the Premier League title.

Numerically, the Gunners are still very much in with a shout, and if they win their game in hand tomorrow against Swansea, they will find themselves only four points behind their London rivals.

While stand-alone results can be misleading, the bigger picture tells a very worrying tale for Gunners fans. In three defeats to Liverpool, Manchester City and Chelsea, Wenger’s side conceded 17 goals. To put that into perspective, that is two less than Crystal Palace have scored all season in the top flight.

The need to bounce back has never been greater, with Arsenal facing a crossroads in their season. Expected to win the FA Cup, and certainly favourites to secure a top four finish ahead of the likes of Tottenham, Everton and Manchester United; the Gunners are still within touching distance of a job well done.

But the slightly tortured idiom, ‘the wheels are coming off’, is starting to gather traction once more, and the remaining 10/11 games of the season for Arsenal could shake the club to its very core.

Indeed, former Arsenal captain Frank McLintock believes Wenger may have no choice but to walk away from the club if they fail to win the cup,

“If they lose to Wigan (in the semi-final), Wenger might say, ‘Don’t worry about sacking me. I’m off,”  McLintock told talkSport. “I don’t think Arsenal will ever sack him though. He’ll have to walk.

“The board think the world of him and he’s been magnificent for the club. I’m not knocking Wenger but his pride would hurt so much if he lost to Wigan.

“I don’t think they will do though. The Chelsea defeat will give them a kick up the back side and I hope they go on and win the FA Cup.

“They’re definitely good enough to lift the trophy and that might just keep Wenger there.

“If they were to fail though, he might just walk away.”

The Swansea match is a must win game, but the fact that most would expect the Gunners to comfortably demolish the Welsh side will put added pressure on Wenger and his side.

Arsenal fans will remember the stunning League Cup final against Birmingham, where their side lost 2-1 when fully expected to triumph unhindered.

However, the Gunners faithful will take heart from the fact that their side have vastly improved against the smaller clubs in the division, with days of losing encounters against relegation threatened sides largely a thing of the past this season.

But their top four form has been nothing short of disastrous.

Pundit Andy Gray, talking with talkSport, believes Wenger to be naive in certain big game situations, with the Chelsea drubbing the latest example of a season-long issue for the Gunners,

“It seems incredible to talk about a man like Arsene Wenger as being naive but I honestly thing sometimes he must be,” said Gray,

“The likes of Fergie, Mourinho, Ancelotti would go into games and think, right, first thing you have to remember is to defend, to be tight early on in the game.

“Arsenal just go into games and play, whether it is home or away, with an openness about them. It seems naive. The weekend was a classic example.

“Seven minutes in, they were so, so open and they are 2-0 down and fighting an uphill battle. It was extraordinary.”

Wenger cancelled his pre-match press conference this afternoon, and perhaps the Frenchman was looking to avoid further questions concerning the Chelsea defeat, which were bound to swamp him.

A smart move if you ask me, with all focus needed for Swansea’s visit tomorrow. Anything less than a win will leave the majority of Arsenal fans in a state of panic, with the ominous visit of Manchester City just around the corner for the club.

What do you think? Arsenal fans, are you worried about tomorrow’s game against Swansea? Let me know in the comments below…