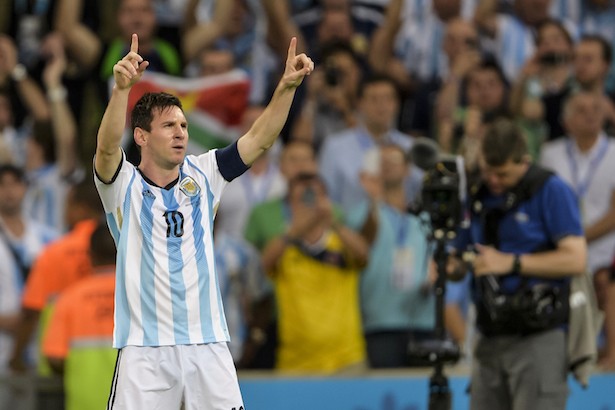 The final round of 16 matches take place on Tuesday with Argentina facing Switzerland and Belgium facing USA to set up the final quarter-final.

A win for either Switzerland or Belgium would see 50% of the final eight made up by European nations.

In the six previous matches in this round the favourites have won every time. Brazil and Costa Rica did need a penalty shootout to prevail whilst Germany were taken to extra-time by Algeria.

The CONMEBOL winners and highest-scorers took maximum points in their group, although failed to overly impress in each of their one-goal victories.

Lionel Messi scored the winning goal in Argentina’s opener against Bosnia and Herzegovina before the Barcelona star broke the hearts of Iran with a stoppage time equaliser. Messi then scored twice in their 3-2 victory over Nigeria.

It has not been a good round for most of the Golden Boot contenders so far with Neymar, Robin van Persie, Karim Benzema and Thomas Müller all failing to score. Colombia’s James Rodríguez took advantage with his brace against Uruguay to become the first and currently only player to score 5 goals so far in this World Cup.

Switzerland were strong defensively in qualifying but have conceded 6 goals already in this World Cup – the most of any of the 16 nations who made it past the group stage. They have conceded goals from set pieces, counter attacks and defensive mistakes in this tournament. Argentina have scored twice from set pieces, benefited from an own goal and have the attacking quality to break down just about any defence.

The European side should see their chances in this match though as Argentina’s centre midfield and defence have not looked so impressive. But I think we’ll see a solid attacking display from Argentina in this one, outscoring their opponents.

Argentina to beat Switzerland is 1.50

Belgium looked solid in winning Group H with three victories. The only goal they conceded came in the first half of their first match and was from the penalty spot. This defensive unit, protected by Axel Witsel and Marouane Fellaini has looked strong to this stage. And with USA not offering much threat to Germany perhaps Marc Wilmots fancies his chances of another clean sheet.

USA are winless in their last two matches since beating Ghana with a late winner in their opening match. They are the only nation to reach the last 16 at this tournament not to have won either of their last two games.

Jürgen Klinsmann’s side work very hard and as a unit defensively before trying to score on the counter attack or set pieces by springing a few players forward. They should have difficulties breaking down this Belgium defence, dependent who is fit because Wilmots’ side have had injury issues at the back over the past week or so.

I think Belgium will be too strong for USA. Watch out for Eden Hazard!