Brazilian forward Anderson Talisca is edging closer to joining Liverpool this summer, according to reports from Portugal newspaper O Jogo.

The 22-year-old forward has a reported €45m release clause but Benfica are happy to sell him for a cut-price deal of €25m only. Wolves are also showing an interest in him but it seems he is heading towards Liverpool instead. 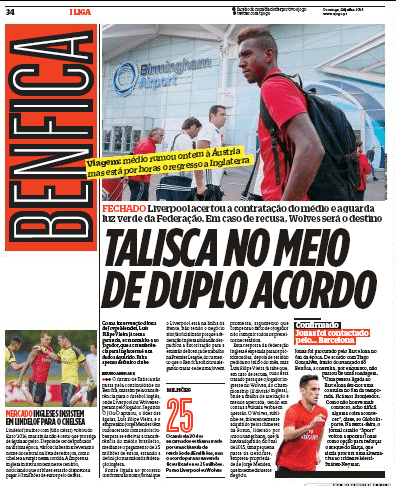 Talisca didn’t participate in a single pre-season training session for Benfica so far but the Brazilian has travelled with the Portuguese club to Austria to participate in friendlies.

It was initially thought that Talisca’s move to the Premier League will fall through due to work permit issues. The Benfica star hasn’t played for the Brazil’s national team as yet and therefore doesn’t fulfil the criteria required to get a work permit to play in England.

Talisca’s agent, Jorge Mendes, will likely to rest the case for the Brazilian saying he is an exceptional talent and will feature for Brazil in the summer Olympics. Mendes is currently negotiating a deal for Talisca as per the report.

Benfica president has already given a green signal for Talisca’s transfer and Liverpool are favourite to sign him. English FA should accept his work permit request shortly.