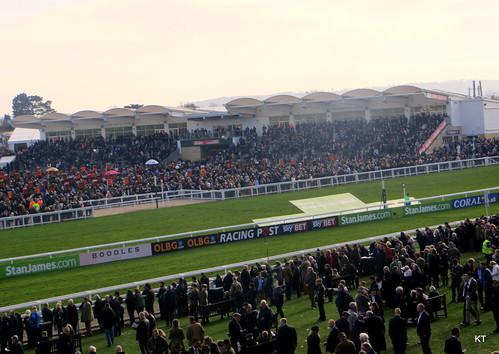 Even at premier National Hunt racehorse events like the Cheltenham Festival, there are hot favourites in competitive contests widely expected by bookmakers and punters alike to win at home of jumps racing.

The four-day Festival is essentially the British championships for horses over obstacles and under Rules. This is an early look at those who are shaping up as banker bets for Cheltenham 2020.

Irish trainer Gordon Elliott and major British Isles owners Cheveley Park Stud are no strangers to success at major horse racing events. In Envoi Allen, they have a red-hot novice hurdle prospect who is unbeaten before and since being bought by his current connections.

Including a point-to-point success, Envoi Allen is seven races undefeated. He sets the standard for novice hurdlers on both sides of the Irish Sea and has already won at the Cheltenham Festival. That success came in the Champion Bumper – a Grade 1 National Hunt Flat race last March – that has proven to be strong form.

Envoi Allen has since won two subsequent outings over hurdlers, including another victory at the highest level in the Royal Bond at Fairyhouse. Whether he is kept over two miles or stepped up further, the bookies fear this horse.

For evidence of that, see the fact that Envoi Allen heads horse racing betting with 888 on both the Supreme and Ballymore Novices’ Hurdle. He is as short as 5/2 for the former which opens the Cheltenham Festival and trading at similar odds for the latter race which opens the second day of the meeting.

As the champion staying hurdler in Britain and unbeaten in his last six, Paisley Park sets a clear and obvious standard. Trained in Wiltshire by Emma Lavelle, inspirational owner Andrew Gemmell has been blind since birth but mapped out the perfect plan as their horse improved no end throughout the last campaign.

'The horse of a lifetime'

Terrific story for owner Andrew Gemmell, who has been blind since birth, as his beloved PAISLEY PARK powered up the Cheltenham hill to Stayers' success 💨👏🏼

One of the most popular winners at the festival in recent years for connections 🙌🏼 pic.twitter.com/trGbZ3MAX6

Starting in handicap company, Paisley Park progressed through the grades and took in two successes at the highest level. Victories in the Long Walk Hurdle at Ascot last Christmas – a crown which he is all the rage to retain – and Stayers’ Hurdle itself during the Cheltenham Festival were obvious highlights.

Paisley Park is young enough and still open to even further improvement to be a dominant force over three miles and the smaller obstacles for the foreseeable future. If winning back-to-back Long Walk Hurdle races, then his current Stayers’ Hurdle odds of 7/4 will only shorten.

Talk about a Cheltenham Festival expert. Tiger Roll has won races at the Prestbury Park track over two miles and four miles, not to mention back-to-back renewals of the Cross Country Chase and then gone on to Grand National glory at Aintree.

This is one remarkable horse in Elliott’s County Meath yard. Although he has suffered a setback in his preparation for spring targets which include a third consecutive Cross Country, Tiger Roll remains a clear favourite to reign supreme at a fifth different Cheltenham Festival.

Whether owners Gigginstown House Stud will send him on Aintree for a historic Grand National hat-trick bid remains to be seen. Tiger Roll is trading around 7/4 for the Cross Country and 6/1 for the world’s most famous steeplechase.