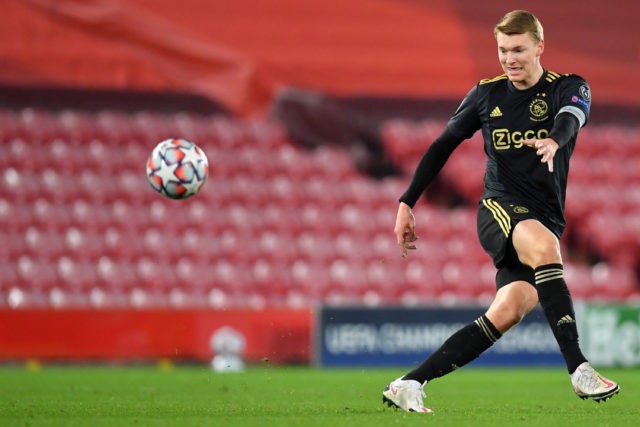 Ajax defender Perr Schuurs has insisted that he is not looking to leave the Dutch club anytime soon, amidst strong interest from Liverpool.

Recently, Italian media outlet Corriere dello Sport claimed that Liverpool had been in talks with the Dutch giants to sign the defender in January.

The Reds are looking to bolster their defence next month following the long-term injuries to Joe Gomez and Virgil van Dijk, and have reportedly earmarked Schuurs who would cost in the region of £27m.

However, the 21-year-old – who featured in the 1-0 defeat against Liverpool in the Champions League clash on Tuesday – has insisted that he is prepared to turn down a move to Anfield as he is focussed on playing for Ajax.

Schuurs said to SBS6, as quoted by the Express:

“Interest from Liverpool in me? I am not busy with that. I want to win trophies with Ajax first and stay here for a couple of seasons.”

Schuurs is an exciting young talent who is available at a reasonable price. He is the latest bright talent to emerge out of the Ajax academy conveyor belt, and his playing style is similar to that of Matthijs De Ligt who moved to Juventus.

The youngster has a contract at the club till 2022. He is yet to pen a new deal, and Ajax would be prepared to sell him if the price is right. Schuurs wants to progress at Ajax before moving elsewhere, and it’s a smart decision from him.

He is playing regularly for the Dutch champions which enhances his chances of playing for the Dutch national team. He has age on his side, gaining valuable experience while playing in Europe, and must not hurry about picking his next club.

Liverpool are left with Joel Matip as the club’s only recognised centre-back, although Fabinho has slotted in nicely and has shown that he can be a reliable option.

The Reds are looking at young talented defenders and have been linked with players like Ozan Kabak and Dayot Upamecano in recent weeks. Bayern Munich’s David Alaba could be another option, but he has been chased by a host of clubs including Chelsea.

Alternatively, Liverpool may look at defenders with Premier League experience and could move for players like Ben White and Conor Coady.