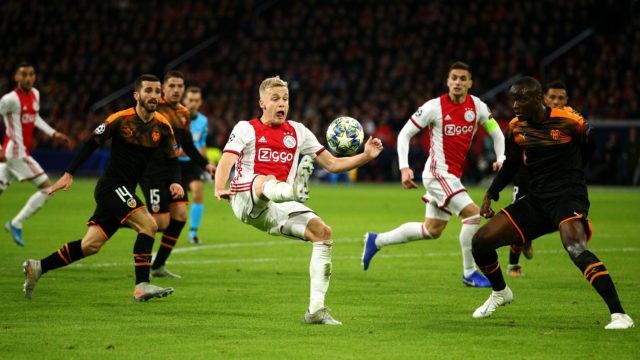 Donny van de Beek could leave Ajax in the summer, according to his agent Guido Albers.

The 22-year-old has been in stunning form this season for the Dutch club.

He has scored 10 goals in 37 games this season to help fire Ajax to the top of the Eredivisie on goal difference before the season came to a halt.

Albers has confirmed interest from clubs in signing his client.

He has also added that Ajax will not stand in his way of a dream summer move.

“There is interest – and that is also known – for a long time and from several clubs. We will see what will eventually come out of that in the coming weeks,” Albers said.

The Sun claimed earlier this month that Spurs are interested in signing the Dutch midfielder.

Jose Mourinho could be looking to bolster his midfield options in the summer and has earmarked van de Beek as a potential option.

However, it would take a huge transfer fee to bring the midfielder to north London.

The Dutch youngster is valued at around  £47 million by Ajax, and it remains to be seen whether Spurs would be interested in paying that amount.

Although he would be an upgrade over Harry Winks, doubts remain whether Spurs at all new another midfielder this summer. The north London club are well stocked in that department, and the money could be spent elsewhere.

Nevertheless, Albers’s comments suggest that a move to the Premier League for the midfielder cannot be completely ruled out.