It isn’t often that you’ll see a team throw away a three-goal lead in the second half as Chelsea did earlier this season in their 3-3 draw with Manchester United. But as wild as this English Premier League season has been, from 8-2, 1-6, 3-5, and beyond.

But as disheartening as it has to be to miss out on what would have been a huge win against a fierce rival, and at home no less, Chelsea could take a little heart from the knowledge that their wasn’t a historic one.

Here are some of the greatest chokes among several of the major sports, failures that will be historic a decade, a century, even a millennium from now. But as colossal as they are, how do they stack up to the football’s greatest chokes? 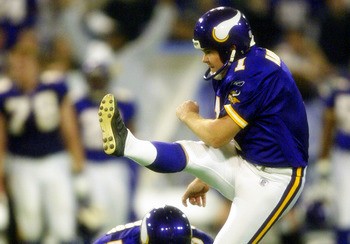 The Minnesota Vikings had put together one of the best seasons in NFL history, going 15-1 and setting a NFL record for most points scored in a season, and they were on course for a berth in the Super Bowl until a series of late-game mistakes proved costly.

The host Vikings led 27-20 in the fourth quarter, the Vikings had a first chance to perhaps salt the game away when they fumbled deep in Falcons’ territory. After stopping Atlanta on defense, the Vikings drove once again, and with just over two minutes remaining, Gary Andersen stepped up for a 38-yard field goal that would’ve all but sealed the deal for Minnesota. But Andersen, who had been a perfect 35 for 35 on field goals in the regular season and four for four in the playoffs, missed the short kick.

The Falcons took full advantage of the reprieve, scoring the game-tying touchdown with less than a minute left to force overtime, and in overtime, they kicked a field goal to win it. 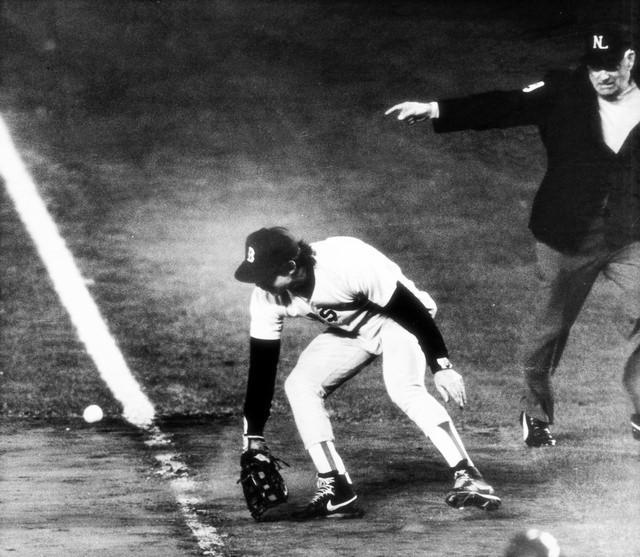 After having not won the World Series since 1918, the Red Sox were on the cusp of ending their drought before letting it slip away in New York.

The Red Sox won the first two games in New York and had a chance to close the series out at home, as the next three games of the series were in Boston. But the Mets won the next two to tie the series at 2, and the series would go back to New York after Boston won 4-2 in Game 5.

In Game 6, Boston couldn’t hold 2-0 and 3-2 leads, as the Mets forced extra innings. The Red Sox scored twice in the top of the 10th inning to take a 5-3 lead, and in the bottom of the 10th, the first two Mets batters were retired to put the Red Sox within one out of victory.

But Boston couldn’t close the door, and after the Mets tied it at 5, first baseman Bill Buckner misplayed what appeared to be a routine ground ball, which allowed the winning run to score from second base.

Two days later, the two teams faced off in a Game 7 decider. The Red Sox led 3-0 going into the bottom of the sixth inning, but the Mets would score three runs in each of the next two innings to take a 6-3 lead, and they would go on to win the game 8-5 and the series 4-3.

It’d be another 18 years before the Red Sox would finally claim that elusive title, and they followed it up with another one in 2007. Still, for many American sports fans, that 1986 World Series remains at or near the top of the list of greatest-ever chokes. 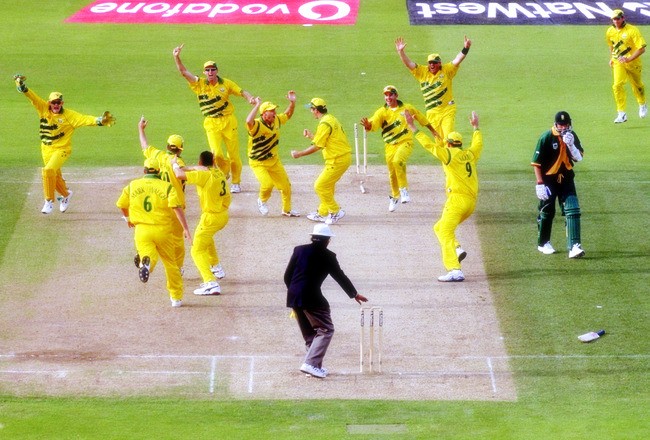 There are multiple options to choose from when it comes to South African chokes in the Cricket World Cup, but this one is the pick for how it happened and when it happened.

After bowling Australia out for 213, South Africa sat at eight runs behind with one wicket remaining going into the final over of the match, still alive after Paul Reiffel had dropped a Lance Klusener shot on the fifth ball of the previous over. On the first two balls of the final over, Klusener beleted consecutive boundaries to bring the scores level with four balls remaining.

South Africa needed to win the match to progress to the final, as a narrow loss to Australia in the previous stage meant that Australia held the tiebreaker, which was superior net run rate.

On the next ball, Australia narrowly missed a chance to run South Africa‘s Allan Donald out to end the match, with Darren Lehmann’s rushed toss missed the stumps after Klusener had miscued his shot. With three balls remaining, Klusener once again miscued his shot, but he sprinted to the other end in an attempt to score the winning run.

He made it, but Donald didn’t see him until it was much too late, and this time, Australia had an eternity to successfully complete the run out. Australia would convincingly defeat Pakistan in the final to start a run of three straight World Cup titles, while South Africa were made to rue a colossal lack of patience and awareness in crunch time. 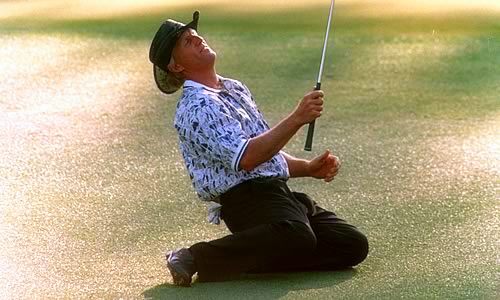 ‘The Shark’ looked primed for a wire-to-wire victory in the 1996 Masters, until it all completely came apart in the final round. He led by two strokes after the first round and four after the second round, and going into the fourth and final round, he held a six-shot lead over Nick Faldo, who sat second.

But what should have been a Sunday stroll proved to be anything but. He did still have a four-shot lead over Faldo after seven holes, but that’s when the tide really started to turn. Faldo birdied the eighth to move within three, and Norman proceeded to bogey the next three holes, which saw the two tied for the lead with seven holes remaining. It’d go from bad to worse on the 12th, which Norman double bogeyed to fall two behind Faldo.

It wasn’t over, but it was over. Faldo wouldn’t relinquish the lead, and any remaining hope Norman had was squashed when he recorded another double bogey on the 16th to fall four back. When the disaster was complete, Norman’s final scorecard showed a six-over 78, and a second-place check of $270,000 was no consolation, as he finished a distant five shots behind Faldo when it looked like he all but had a maiden Masters win in the bag. 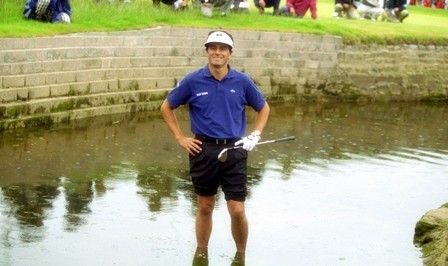 While Norman’s horror show at Augusta is the worst final-round choke in golf history, Van de Velde holds the mantle for the worst final-hole choke. The unheralded Frenchman had led after the second and third rounds, and after starting the final round with a five-shot lead, he led by three going into the final hole.

All he had to do was play it safe and avoid disaster to close out a stunning win, but what followed is still inexplicable to this day. Instead of going for a safe shot, he used his driver, and he used it horribly, hitting it into the rough. Things would only get messier from there, literally, as he would end up having to take his shoes and socks off to play one of his many shots on the 18th.

He finished with a triple-bogey 7, and instead of celebrating as he should have been, he had to go into a three-man playoff with Paul Lawrie and Justin Leonard. The chance for him to put the 72nd hole behind him was there, but his momentum and confidence was shot, and he finished three strokes behind winner Lawrie in the four-hole playoff. 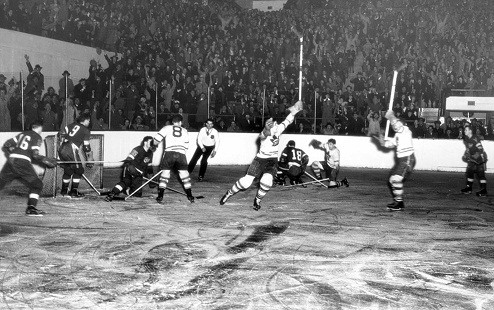 Only three times in National Hockey League history has a team overcome a 3-0 deficit to win a playoff series. The most recent time was in 2010, when the Boston Bruins threw away a 3-0 series lead and a 3-0 lead at home in Game 7 against the Philadelphia Flyers in the Eastern Conference semifinals, but the only time it happened in the Stanley Cup Finals was in 1942, when the Red Wings blew it against the Maple Leafs.

The Red Wings won the first two games in Toronto, and they took Game 3 in Detroit 5-2 to move within a win of the title. But Toronto eked out a 4-3 win in Game 4, and the series returned to Toronto, where the Maple Leafs routed the Red Wings 9-3 in Game 5. Detroit once again had a chance to close the series out at home, but they were shut out 3-0 in Game 6, and Toronto completed the miracle comeback with a 3-1 in Game 7. 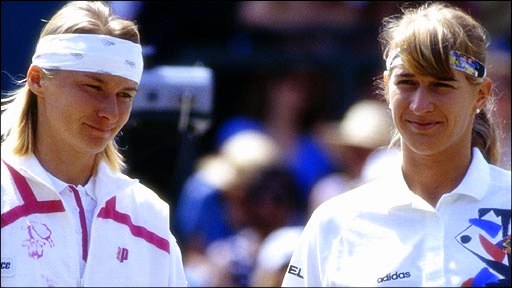 When you have a chance to take down arguably the greatest women’s tennis player of all time, you need to take it. Novotna was five points away from doing so, before a memorable, emotional collapse.

After losing the first set 7-6, Novotna took control. She won the second set 6-1, and she would eventually have a lead of 4-1, 40-30 in the third and final set. On game point, she hit her first serve into the net, and her second serve flew well wide. On the next point, she completely mishit and sent long what should have been a winner. Another error followed on the next point to give Graf the game.

In the next game, Novotna actually had a chance to break back and serve out the match, but Graf won four straight points after going down 15-40 to make it 4-3. Novotna led 30-15 in her next service game, but Graf would break to level the set at 4-4. Graf held her serve at love to take a 5-4 lead, and the capitulation would be completed in the next game, as she broke Novotna yet again to claim a 6-7, 6-1, 6-4 victory.

As memorable as the collapse was what transpired in the post-match ceremony, as Novotna broke down in tears as the Duchess of Kent consoled her as she went to accept her runner-up trophy.

However, the story would have a happy ending. After losing another three-set Wimbledon final in 1997, this time to teen sensation Martina Hingis, Novotna triumphed in straight sets over Nathalie Tauziat in the 1998 final for her first and only Grand Slam singles title.