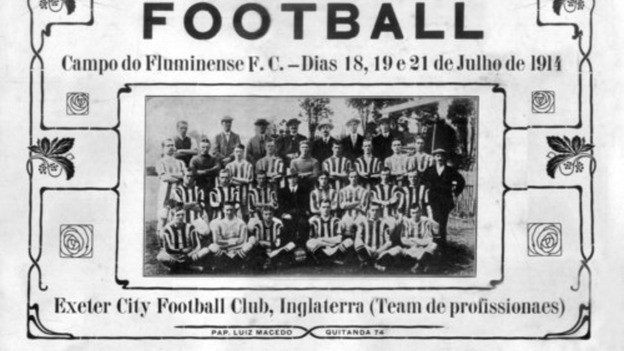 Facts are an indispensable part of the game of football. All the intrigue of the beautiful game is not merely captured by its motions; facts are the tools with which the game connects to its entities off the pitch. Facts in football veer from the palpably basic ones to bizarrely outlandish ones. Here are 30 of the bizarre football facts that sound like lies, but are actually facts.

1. Brazil’s first official match was against Exeter City. The Brazilian national team was born when an all-star team made up of Rio de Janeiro and Sao Paolo’s finest took on the mighty Exeter City in Rio’s Laranjeiras Stadium on July 21 1914, the day when the Brazilian national side was born. The above photo was a poster for the match.

2. England came up with the word “soccer”. It’s a shortened version of “Association Football” that was changed to “Assoc Football”. This was changed to “Soccer”. In 19th century England, it was popular to add the “-er” sound to shortened words.

3. Stefan Schwarz arguably had the most bizarre clause to have ever been inserted into a player’s contract. When signing for Sunderland in 1999, the Swede was banned from travelling into space!

4. Sol Campbell played for five clubs — Tottenham Hotspur, Arsenal (twice), Portsmouth, Notts County and Newcastle United — without ever commanding a fee. In a career spanning almost two decades, Campbell played more than 500 club games in English football without ever having had a price tag.

5. After losing a play-off against local rivals Boedo for the right to their black-and-white-striped kit in March 1907, Boca Juniors agreed to visit Buenos Aires harbour and take the colours of the first foreign ship to come in. The 4,146-tonne freighter Drottning Sophia arrived from Copenhagen, flying the Swedish flag and the rest is history. When the club released a limited-edition 105th anniversary shirt in 2010, it even bore the yellow and blue national flag on the front.

7. In 1998, lightning killed an entire football team. This tragedy occurred in the Democratic Republic of the Congo during a match between the villages of Bena Tshadi and nearby Basangana. Strangely, the lightning annihilated all eleven members of the home team, while all of Basangana’s players were spared with severe burns at worst. This disparity caused many locals to blame the event on some sort of sorcery or witchcraft!

8. Scottish striker Kris Boyd managed to be the top scorer for two separate teams in the same season, having moved from Kilmarnock to Rangers in January 2006. He ended the season with 17 goals for Killie and 20 for Rangers in the 2005/06 season, which was good enough to be top scorer for both teams.

9. The English club to have held the world transfer record the most times is Sunderland, who broke it for Warney Cresswell in 1922, Bob Kelly in 1925 and Trevor Ford in 1950. The last English club to hold it was Newcastle United when they paid £15m for Alan Shearer in 1996. Real Madrid have broken the world transfer record the most times (5) for Figo, Zidane, Kaka, Ronaldo and Bale. The last team other than Real Madrid to break the transfer record was Lazio when they paid £36m to Parma for Hernan Crespo.

10. The record for the longest FA Cup tie is held by Oxford City and Alvechurch, who took six ties to sort themselves out in 1971–72. Their record can no longer be broken because of the rule change that limits FA Cup ties to one replay.

11. Former Stoke City defender Danny Higginbotham has played for eight different clubs and one country whose basic colours were red and white. Higginbotham, who started his career at Manchester United, turned out for Southampton, Stoke, Sunderland, Royal Antwerp, Nottingham Forest and Altrincham in his long career, all of whom had red and white as their basic colours. And he also played internationals for Gibraltar, another team with red and white on their kits.

12. Sunderland (6) have more top flight league titles than Chelsea (5), Manchester City (4), and Tottenham (2). Also, Kevin Phillips is the only English player to win the European Golden Shoe. And he played for Sunderland the year he won it.

14. The most prolific goalscorer of all-time is Josef Bican, an Austrian-Bohemian striker who played for Slavia Prague in the 1930s and 1940s. Bican, it is claimed, scored more than 805 goals in his career. His record for Slavia stood at 534 goals in 274 official games at a rate of 1.95 goals per game.

15. Aston Villa finished their league campaign in 11th place when they won the European Cup in the 1981/82 season. It was the lowest league finish for a team winning the European Cup.

16. Jari Litmanen holds an incredibly unique distinction: he is the only footballer to have played international football in four different decades. Litmanen made his senior Finland debut against Trinidad and Tobago in October 1989 and played his last game in November 2010 against San Marino.

17. Burton Albion hold the record for the most away fans at a Manchester United game. 11,000 Burton fans made it to Old Trafford in January 2006 for a FA Cup third round tie. Burton’s home ground, Pirelli Stadium, has a capacity of only 6,912.

18. Sunderland (6) have more top flight league titles than Chelsea (5), Manchester City (4), and Tottenham (2). Also, Kevin Phillips is the only English player to win the European Golden Shoe. And he played for Sunderland the year he won it.

19. Kettering Town were the first British team to have a shirt sponsor. In 1975, the club brokered a four-figure deal with local firm Kettering Tyres and in a Southern League game against Bath City on January 24 1976, they became the first British club to run out with a company’s name emblazoned on their shirts.

21. French outfit Girondins de Bordeaux hold the record of the longest cup competition run. In 1995/96, the Bordeaux side featuring Zinedine Zidane, Christophe Dugarry and Bixente Lizarazu had a 20-game European campaign. Here is their run in full:

22. Eredivisie side Willem II from Tilburg are named after King Willem II of the Netherlands. Tilburg housed his military headquarters.

23. Diego Maradona once played for Tottenham Hotspur. The Argentine legend donned the whites of Spurs against Inter Milan at White Hart Lane in Ossie Ardiles’ testimonial game back in 1986. Here is the video of El Diego wooing the British crowd.

24. Benfica won the European Cup the first two times they entered it but have not won it in 29 appearances since then.

25. The city of Lusail where the opener and final of the 2022 World Cup will be played has not been built yet.

27. Aston Villa used only 14 players in winning the First Division championship in 1980–81. Given teams nowadays name more than that number in match day squads, Villa’s record is unlikely to be broken ever unless under extraordinary circumstances.

28. Manchester United goalkeeper Alex Stepney dislocated his jaw while instructing his defenders in a match against Birmingham in 1975. In those days there were no goalkeeper substitutes and midfielder Brian Greenhof went in goal and kept a clean sheet.

29. Dundee United have played and beaten Barcelona 4 times in professional fixtures, giving them a 100% win record. The Terrors beat the Spanish giants home and away in the UEFA Cup in the 1966/67 season and 1986/87 season.

30. Something which defies belief is the fact about Neil Armstrong and his desire to take a football to the moon. Armstrong originally wanted to take a football to the moon – but Nasa deemed it to be un-American. And comparable to the Armstrong saga would be the Masal Bugduv saga. The fictional Bugduv made the rounds in various publications in 2009 as a wunderkind set for his big move to the European elite. You can read about the entire saga here.