Arsenal were linked with a move for Real Madrid striker Karim Benzema in the summer but the deal never materialized. The Gunners are linked with Benzema again as The Standard reports the North Londoners were told they can sign Benzema in the winter for a cut price deal.

Arsenal should make a move for him, here’s why: 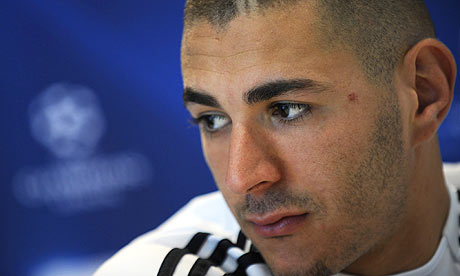 Don’t go by his current form. It can happen to anyone, every player goes through bad patches. They say form is temporary, class is permanent. Benzema is world class and should walk into any team in this world.

Arsenal badly need a striker this January. They simply cannot rely on Olivier Giroud to deliver the entire season and there is not enough back-up for him, should he get injured. Therefore, Benzema presents the perfect and ideal strike option for them.

Yeah, he is just 25. He must not be seen as Real Madrid-reject but Arsenal must see the bigger picture here. His best playing days (about to reach the peak) are infront of him and this is the time Wenger must capitalize.

Benzema can be used as a lone striker in the squad or Wenger could use him as a strike partner of his fellow countryman Olivier Giroud.

Ozil and Benzema partnership worked fairly well at Real Madrid and there’s no reason why it should not work at Arsenal again. Plus, Benzema has the perfect blue-print in front of him in the form of Ozil, who has settled in nicely and is firing all cylinders. Same can happen with him.

Arsenal could actually get him on a cut-price of around £20m. That is reasonably cheap amount taking into consideration that he was valued at £40m in the summer.

Are there any better options available?

The options are limited. Robert Lewandowski and Jackson Martinez are possible options, but they won’t be available for cheap and several others clubs are keeping close tabs on them. Arsenal and Chelsea are the only two sides interested for Benzema but the Blues have other targets too. The North Londonders should not face any difficulty in luring him.

Should Arsenal go for Benzema in January? Share your thoughts below…