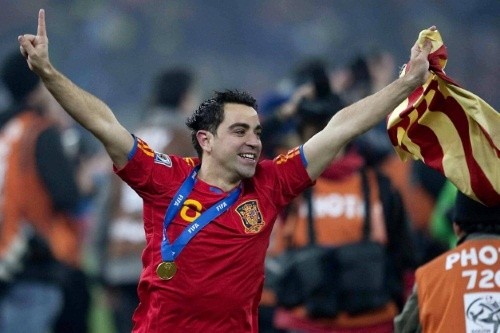 Xavi Hernandez’s glittering career is set to endure another monumental milestone as he looks set to collect his 100th international cap for Spain against the Czech Republic on Friday night in their Euro 2012 qualifier.

The Barcelona midfielder has endured a beautiful career both club and country where he has became a European champion as well as a World Cup winner in a three year span. His involvement has been a crucial cog in the Spaniards rise to domination with his articulate passing and divine footballing intelligence.

His international bow came at the start of the millennium after winning the FIFA U-20 World Cup in Nigeria where the Catalonian orchestrated his midfield attributes as well as chipping in with goals against the United States in the last-sixteen and a 90th minute strike against Mali in the semi-final. From there on in it was blatantly obvious that the young Blaugrana starlet would go on to become a household name for both club and country.

He will become only the fourth Spaniard to reach a century of caps, whilst leaving him just two shy of the great Raul Gonzalez who is widely considered the country’s greatest ever. With Xavi looking a foregone conclusion to overtake the Schalke striker, many will reassess that assumption considering the role Xavi has played in making Spain the most dominant football nation on the planet.

His appetite for more international accolades still rumbles on and has no immediate desire to relinquish his international duties. Speaking to AS he expressed his pride at reaching such a landmark and hopes to continue representing La Roja for many more years to come:

“I’m very satisfied and happy to achieve this milestone. I’m confident that there will follow many more games. This is an extraordinary period for the team and I’m really proud to be part of this squad and these players.”

“I’m focusing on qualifying for Euro 2012 at the moment, but that’s not my only objective. I’m eager to feature at the 2014 World Cup as well.

“I’m still enjoying my football and plan to do so for several more years. I hope to be as enthusiastic then as I am now.”

Xavi is one of the greatest midfield talents of his generation, not just for his club and country but in the sport as a whole. His play is similar to that of Zinedine Zidane who revolutionised the modern game as a thing of beauty with divine intelligence, diligent control and artful flair. Xavi’s colleague in the national team Javi Martinez made the comparison with the Frenchman during an interview with MARCA, lauding them as “examples” to follow for aspiring youngsters.

All in all Xavi’s charismatic play in midfield dictates the success of his team and the longer he continues to lend his assistance, the longer the Spanish national will reap the benefit.