A picture says a thousand words, a video says more. Debate even flared at the Washington Post about the skirt controversy.

Arena recharges Galaxy roster to fly with or without Beckham

Bayern Munich apparently purchased the ticket for Landon Donovan’s flight back, so after ruffled feathers are smoothed, say June, July, the Galaxy could be a competitive team.

The Milan/Galaxy ruckus is a bonus to MLS. Beckham is doing exactly what he’s supposed to do — spotlight soccer in the slick center stage of American sports. Now he’s found someone more attractive. The public can pretend they don’t care, do the “we’re growing as individuals” thing, but they’ve been jilted and feeling a little miffed.

So how should MLS deal with Beckham if he comes back to the circus that is the LA Galaxy?

The shortage of capable young American players that afflicted the Galaxy is partly due to excessive NCAA restrictions on college programs and now exacerbated by the November 2008 MLS decision to guillotine reserve squads throughout the league.

That decision was spurred by the lack of funds for salary and staff to the extent squads rostered office staff and volunteers for reserve games. The decision reduced rosters from 28 to 24, with first team squads increasing from 18 to 20 with four developmental players. 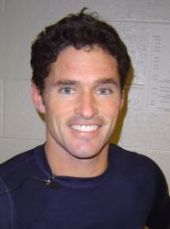 We spoke with Jay Heaps about the cutting of the reserve squad. Heaps, Duke graduate and defender for the New England Revolution, took the Revs to four MLS Cups, played every minute of all 30 matches in 2008, and is team representative to the MLS Players Union.

LE: How does cutting the reserves benefit training and team operations?

Heaps: It doesn’t affect the day-to-day that much. Obviously, you’re going to miss out on some players. It would be great if we could have 28 players and have a reserve league, but I don’t think it’s financially viable right now. Last year we were signing players for one game and flying them into a trip and that’s it. It wasn’t the intended goal the league had when it set out — which is the right thing. I think the reserve league will be something they look to, but right now it’s a little premature in that we just don’t have enough numbers right now. Once we get to a position where we have the financial stability that we have 29, 30 guys on a roster you can create two teams and really do well.

LE: How do you feel about that decision?

Heaps: It’s better how it is now but in the same breath, there’s going to be a couple players lost that may have been that 25th guy, 26th guy that takes a little bit more than a couple months training to make a team. Like Jeff Larentowicz — he’s a perfect example — or Chris Rolfe, guys that were on developmental contracts that may not have been around if there wasn’t a reserve league. It would be a real shame if there were a couple of those guys that fall through the cracks.

Heaps: It’s a bit of a loss, but at the time we weren’t doing it the right way. Taking a year off from it and getting back to what makes it work and creating that is what we need to do.

The preseason is on in MLS with scores running up and down in friendlies with NCAA, Mexican, Argentine, Chinese, USL, PDL, and other MLS teams as the coaches jockey players in various positions.

Under coach Jason Kreis, Real Salt Lake is undefeated in four preseason games and has yet to allow a goal, splitting time in net between Nick Rimando and Chris Seitz against NCAA, PDL, and Chinese Shandong Luneng Taishan, embarrassed 8-0.

The New York Red Bulls beat River Plate 2-1, with the go ahead goal scored by Dane Richards. Red Bulls unlikely trialist Aklie Edwards equalized with an own goal and Andrew Boyens made it right in the 73rd minute with a left-footed blast. River Plate was led by former DC United Marcello Gallardo, but largely fielded by reserves. Juan Pablo Angel rested for this match but signed an extension with the Red Bulls through 2012, when he turns 36. In the last two years, Angel scored more regular season goals than any other MLS player.

The regular season starts March 19 with the Red Bulls test-driving the upstart Seattle Sounders at home. Seattle sold over 20,000 season tickets and brags it can sell 15,000 more at the door. Nate Jaqua and Fredy Montero found chemistry and together scored 12 goals in six preseason games. More and more, the Sounders – with Kasey Keller, Freddy Ljundberg, Sanna Nyassi, and central defender John Kennedy Hurtado – are looking like contenders.

The Sounders will host Chelsea July 18 at Quest Field. This is Chelsea’s fourth visit to Seattle, the first in 1967 and last in 2004 when they defeated Celtic 4-2.

Houston Dynamo will be fighting for survival in the away leg of the CONCACAF Champions League quarterfinals March 3 in Cancun after their 1-1 result at home with Atlante. In the 34th minute, Bobby Boswell flicked in the header that left the Dynamo ahead and overconfident until Gabriel Pereyra evened the score with an away goal in the 83rd minute.

FC Barcelona made statements backing away from it’s bid for a Miami franchise, citing the risk of a $40 million price tag in a shaky economy. But co-investor Mauricio Claure reportedly returned to Barcelona to celebrate with his partners when MLS awards the franchise, possibly by next week.

In response, Montreal and Portland (Oregon) restated they’re ready and eager to establish an MLS franchise should Barca back out.

“We’re very, very close,” said De La Hoya. “So close that we can taste it, that’s how close we are. I am very optimistic that we can have, hopefully, a stadium within the next two years ready to go.”