Morning all and welcome to the daily World Cup column on Soccerlens.

Some hearty SL congratulations are in order this morning, with the news that English referee Howard Webb and his team have been confirmed as the men FIFA want to take charge of the World Cup final.

Be bald Howard, and be beautiful.

Webb gets the big one…

Premier League referee Howard Webb has been selected by FIFA as the man they want to oversee the World Cup final on Sunday evening, becoming the first Englishman to do so since Jack Taylor took charge of the 1974 final.

The 38-year-old from Rotherham, who is on a five-year sabbatical from the South Yorkshire police force, will take charge of the final at Johannesburg’s Soccer City – along with his assistants Darren Cann (who’s call to rule out Fabio Quagliarella‘s equaliser against Slovakia was inspired) and Michael Mullarkey – following the decision by FIFA’s referees committee.

After their appointment last night, Premier League referees chief Mike Riley was quick to praise Webb and team of his assistants, saying;

“It’s not only recognition for their excellent tournament in South Africa so far but also the progress they have made internationally over the last four years.

Their appointment is fantastic recognition for English refereeing and should act as an inspiration for all young referees wanting to enter into the game. It just shows what you can achieve if you work hard.”

Well done Howard, at least one Englishman has done himself proud in South Africa this summer. 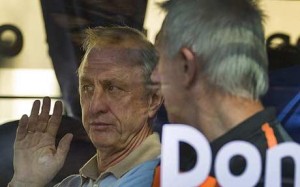 Dutch icon Johan Cruyff has played down his country’s chances in the World Cup final, instead backing Spain to systematically ‘kill off’ Bert Van Marwijk‘s side.

Jopie tasted final disappointment in 1974 when the Netherlands lost out to Germany, and he has forewarned his current batch of Oranje-clad compatriots that they run the risk of suffering the same fate.

“Spain’s style is the style of Barcelona. Now, Spain are favourites to win the World Cup.

[On Wednesday night] the same Germany team that dazzled us against Argentina played football as it knows best; a football that without a doubt would have been enough to beat any other team – but not Spain.

If Spain goes for you, it kills you.

There’s no doubt that Germany knew what they were going to go through, just like Holland is probably thinking now – if you go up against a team that wants to keep the ball, you’re going to suffer.”

…with only a towel to preserve his modesty. Good lord!

“It is a privilege to play among this group of players. There is so much quality.”

Spain’s Xabi Alonso is loving life in La Furia Roja‘s midfield and, with him getting front-row seats to ‘The Xavi and Andres Iniesta Show’ week-in-week-out, it’s hardly surprising! 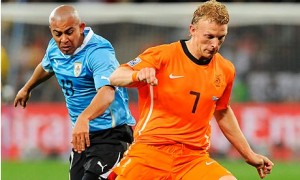 Netherlands forward Dirk Kuyt has accused Germany of ‘playing with fear’ when they lost out to Spain in the semi-finals, and insisted that his country will not be falling into the same trap;

“We are not afraid at all. You could see the Germans were afraid of Spain. They didn’t try to attack. We are going to attack and then you will see weaknesses coming to the surface.

Kuyt also believes that, where many past Dutch teams have failed to live up to their pre-tournament hype, the current squad possesses the self-belief necessary to go all the way;

“Dutch football is always very strong and, in every tournament we play, we show we have quality. But, in this tournament, we have shown we have more than just quality. We also have belief.

We believe we can beat every opponent in front of us.We have the patience to do that. Against Brazil we were 1-0 down, but we still had the conviction that we could win.

Against Uruguay in the semi-final they equalised and, in tournaments in the past, we would have gone on to lose it from that point. But this time we stayed focused.

We believed in our own qualities. We kept our positions and, in the second half, were the only side that deserved to win.”

Uruguay will ‘fight to the death’… 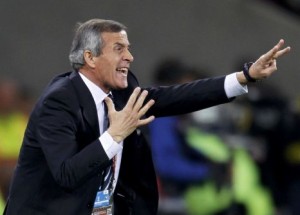 Uruguay coach Oscar Tabarez has vowed that his side will be taking their third-place play-off game with Germany on Saturday evening seriously, declaring that La Celeste are prepared to ‘fight to the death’;

“This is a very difficult game.

Yes, fourth position is not the same as others, but we will go in with the same commitment and enthusiasm like we did in the encounter against Holland.

The challenge for Uruguay is to finish third in the World Cup. I know Germany and they will make it very difficult for us, so we must fight hard to win.

We have no assurances [that we will win], but we will prepare ourselves to fight to the death.”

“In the past, to be honest, [the Third-place play-off] was of little interest to anyone and frankly I never even watched those games as a kid.” 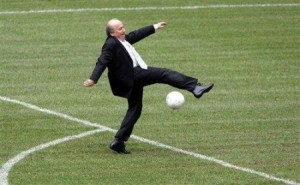 FIFA president Sepp Blatter has ruled out the introduction of ‘penalty goals’, after calls for such a punishment began to circle in light of Uruguay striker Luis Suarez‘s finger-tip save against Ghana last week.

Football’s governing body have also faced mounting pressure for the implication of much more stringent disciplinary measures doled out for deliberate handballs (Suarez only received a one-match ban for his actions).

Blatter told a media briefing that, although FIFA would not be considering penalty goals, they are planning to discuss certain rule changes at the International FA Board in October;

“That meeting in October is when we will discuss the question of goal-line technology and take on such situations as we have witnessed in this competition with Suarez in the last minute of the match between Uruguay and Ghana.

You have seen in this competition and in others that it’s so difficult to say if a ball is in or out. But if it is not in, then no referee can declare it is a goal. This is definite.”

FIFA have also revealed that they will use the upcoming board meeting to mull over the introduction of goal-line technology.

Veteran Spain defender Carles Puyol, who scored the goal that secured his country’s place in the World Cup final, is to make a decision on his international future after the tournament wraps up on Sunday. (F365)

Germany general manager Oliver Bierhoff insists that the future is bright for his young team, despite their elimination from the World Cup. (Sporting Life)

Netherlands coach Bert Van Marwijk has rejected comparisons between his squad and the great Dutch sides of the 1970’s. (Sporting Life)