Good morning everyone and welcome to the daily World Cup column on Soccerlens.

Spain are deserved campeones del mundo, Andres Iniesta is officially better than Xavi for the foreseeable future and the carnival is over for another 1432 days. Roll on Brazil 2014!

The reigning European champions secured their first ever World Cup title in dramatic circumstances at Soccer City, when Andres Iniesta (who has arguably been their player of the tournament) thrashed home an extra-time winner that condemned the 10-man Netherlands to yet another final defeat – their third in three attempts.

The frankly woeful opening 45 minutes was punctuated by several malicious fouls on the Netherlands’ part (the worst being Nigel de Jong‘s chest-high studding of Xabi Alonso), with referee Howard Webb booking five players within the first half an hour.

However there were also several chances for either side to edge in front, but Sergio Ramos, Joan Capdevila and the lively Arjen Robben all failed to make the most of the chances they were respectively handed.

The game finally sprung into life in the second-half and, whereas the rhythm of the tie continued to be hampered by the steady stream of bookings, moments of real quality were also increasingly prevalent.

The Netherlands visibly tired as the match progressed, and the constant harassment that had disrupted the Spanish gameplan in the early stages began to subside which allowed Xavi and Iniesta to begin to dictate proceedings from midfield.

The Barcelona duo were also aided in their exploits by the introduction of ‘Cesc Fabregas (who replaced Alonso in an attack-minded rejig), and the Arsenal skipper almost made an immediate impact but instead saw his low effort repelled by the legs of the impressive Maarten Stekelenburg.

With the stalemate intact after 90 minutes, the final entered extra-time and in the 110th minute came the decision that finally put paid to the Netherlands’ hopes of going the distance.

After pulling back Iniesta on the edge of the area, Dutch centre-back John Heitinga was dismissed by Webb and, despite the protests of his teammates, there was little question that the English referee had made the correct call.

Heitinga’s red card seemed to spur Spain into a final flourish, and it was after a short period of sustained pressure that Iniesta struck his fateful blow. After being played through by Fabregas, the Barca maestro took one touch to set himself then fired an low angled drive past Stekelenburg.

With just four minutes left on the clock, the Dutch were left with little time to find an equaliser and never really looked like doing so.

Spain’s buoyant finale was marred slightly when late-substitute Fernando Torres pulled up with a hamstring injury, but Vicente Del Bosque‘s side held on without any further cause for concern – thus sparking joyous scenes at the final whistle.

“Spain deserved to win this World Cup. It’s something we have to remember and enjoy, and should feel very proud of everyone in this squad. The manner in which it happened, we gave everything. To win the World Cup – there are no words to describe it.”

“As for the octopus, what can I say? We won. The octopus will be very popular in Spain.”

Iniesta goes on to thank the real hero.

“This is an historic moment for Spain and it may never be repeated – and I dedicate this to my whole family. The fans have fantastic, the rock on which we base everything, and I hope in two years’ time we will have more joy at the Euros.”

“It’s a historic moment for Spanish football. This achievement is something that we, the players, are still not aware of…what the significance really is. I think it’s something we will only realise over time.”

It’s not quite sunk in for Iker Casillas.

“First of all I should congratulate our opponents. They made it very difficult for us to play comfortably. It’s been a very intense match, and congratulations to them.”

Spain coach Vicente Del Bosque. Would he have been be quite so generous had his side lost?

“The dressing room is delighted, ecstatic. But Spain, the country, deserves this triumph, this World Cup. This goes beyond sport. We have to celebrate. All the people have been behind us in Spain, and we’re delighted to reward them with this victory.”

Del Bosque dedicates the win to the entire country.

“I don’t think the referee controlled the match well. But let me be clear about this: the best team won the match.”

Netherlands coach Bert Van Marwijk gets his excuses in…

“We are angry because we were so close. The referee was slightly more for them than for us. That ultimately cost us the cup.” 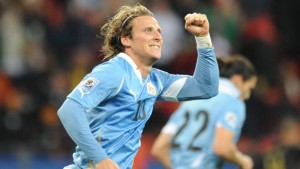 Uruguay striker Diego Forlan has seen his fine World Cup performances capped by being bestowed with the FIFA Golden Ball Award – i.e. the award for the best player at the tournament – for hitting five goals during La Celeste‘s surprising run to fourth place.

The 20-year-old German forward was also awarded the Best Young Player title, while Spain stopper Iker Casillas was handed the Golden Gloves prize for the top goalkeeper – after conceding only two goals in seven games during the tournament. 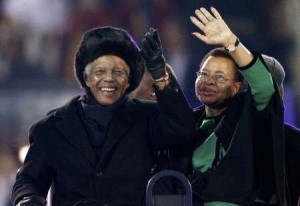 After a series of reports and counter-reports, South African icon Nelson Mandela did attend the World Cup final in Johannesburg last night although it appears that the former president may have been pressured into an appearance by FIFA – in a bid to preserve their image.

Mandela, who is still mourning the tragic pre-tournament loss of his granddaughter Zenani and is struggling with ill-health, was present at Soccer City but only after football’s governing body made sure he was.

“We have come under extreme pressure from FIFA requiring and wishing that my grandfather be at the final.

FIFA said their president Sepp Blatter wished my grandfather comes out to the final. I think people ought to understand our traditions and customs, understand we’ve had a loss.

We are in mourning.” 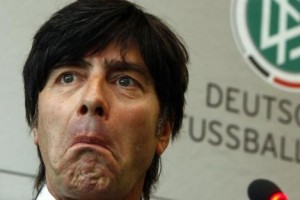 Germany coach Joachim Loew is to receive the country’s Federal Cross of Merit for guiding his charges to a third place finish at the World Cup after seeing off Uruguay in a dramatic play-off tie on Saturday evening.

Germany President Christian Wulff subsequently announced that Loew would be handed the prestigious honour, with the players also set to be decorated with the Silver Laurel.

Fan tries to steal the World Cup, gets flattened…

“We have survived finally the vuvuzelas, everybody has.”

FIFA President Sepp Blatter has made it through unscathed.