Good morning everybody and welcome once more to the daily World Cup column on Soccerlens.

England take on Group C leaders Slovenia (that just doesn’t sound right does it?) later today and need to pull a convincing win out of the bag in order to, at least momentarily, silence their growing phalanx of doubters.

Could this be the game where it all finally clicks into place for ‘Crazy’ (see below) Fabio’s men? Only time will tell.

Despite ending their tournament campaign on a high, South Africa couldn’t prevent themselves from becoming the first host nation in World Cup history to fail to reach the second round.

Carlos Alberto Parreira‘s side battled to a richly-deserved victory over a despondent French outfit but, thanks to results elsewhere (see below), unfortunately still finished third in Group A and were eliminated on goal difference.

South Africa were two goals up at half-time through Bongani Khumalo and Katlego Mphela, and looked on course to provide the shock of the group so far. With Mexico drawing with Uruguay in Rustenburg, Bafana Bafana needed just two more goals to advance through to the last 16 – and it didn’t look beyond their reach, as France continued to play with an air of acrimonious petulance.

However, the South African’s couldn’t add to their tally and eventually faded when news of a Uruguay goal filtered around the stadium.

Raymond Domenech‘s men, who had midfielder Yoann Gourcuff sent off in the first-half for a dangerously-raised elbow, did pull a goal back fifteen minutes from time through Florent Malouda – but never looked like showing the resolve needed to salvage any shred of dignity from what has proven to be a shambolic tournament (one point and one goal) for Les Bleus.

What a thoroughly odious little pr*ck that man is.

Domenech apparently refused to shake Parreira’s hand after the game as the South African coach had dared to criticise France’s ‘method of qualification’ (i.e. Henry’s handball) for the World Cup last year.

A single goal from Ajax forward Luis Suarez was enough to ensure that Uruguay would finish on top in Group A and safely book their passage into the knock-out phase.

It was widely expected that the two sides would merely play out the draw needed to guarantee both country’s qualification to the second round, but an end-to-end encounter scotched the conspiracy theories before they’d even begun to take shape.

Top spot in the group (and therefore the probability of avoiding Argentina in the next round) was up for grabs for the victor, and Suarez secured his country’s position at the top of the tree when he headed home Edinson Cavani‘s looping right-wing cross minutes before half-time.

Mexico were lively throughout, with Andres Guardado striking the underside of the bar and Giovani Dos Santos seeing his close-range effort blocked by Jorge Fucile, but just didn’t have the decisive final product to unlock the Uruguayan defense.

Upon learning of the result in the other Group A game in Bloemfontein (i.e. France v South Africa), both sides were able to celebrate at the final whistle.

The Albiceleste booked their place in the last 16 with a third straight Group B victory over a lumpen Greece side that tried, but eventually failed, to stifle Argentina without venturing forward in search of a goal themselves.

Otto Rehhagel deployed the same negative tactics that saw his side crowned European champions in 2004 after a string of 1-0 wins, and successfully kept Argentina at bay until the 77th minute when centre-back Martin Demichelis pounced on a rebound to lift a shot into the roof of the net from six yards out.

Lionel Messi, who was relentlessly man-marked by Sortirios Papastathopoulos, then tore through the Greek defensive lines and cracked a vicious effort against the post – the Barcelona forward again cruelly denied his first goal in South Africa by the woodwork.

However, a second goal eventually arrived in the 89th minute when 36-year-old Boca Juniors striker Martin Palermo rolled a shot past Alexandros Tzorvas after the Greek stopper palmed Messi’s crisp shot into the path of the veteran hitman.

South Korea booked a second round tie with Uruguay after securing the point they needed to edge past Greece into second place in the final Group B standings.

Nigeria created a steady stream of chances all night, and took the lead in the 12th minute when Kalu Uche stole in front of his marker to prod Chidi Odiah‘s driven cross past Jung Sung-Ryong.

The Asian side hit back five minutes before the break when Lee Jung-Soo bundled the ball across the line (heading into his own foot) following Ki Sung-Yeung‘s whipped free-kick.

South Korea then got their noses in front five minutes after play resumed, when Park Chu-Young‘s free-kick wrong-footed Vincent Enyeama in the Nigerian goal and found it’s way inside the far post.

Everton striker Yakubu restored parity for the Super Eagles from the penalty spot, but only after fluffing an open goal – somehow slotting wide from four yards out when it was easier to score.

Nigeria pressed in search of a further goal, but South Korea held out for the point they needed to qualify for the second round for the first time in a World Cup staged on foreign soil.

The truth is out there… 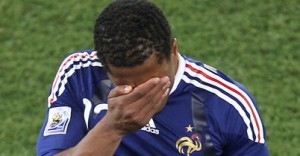 France captain (at least I think he’s still the captain) Patrice Evra has vowed to ‘reveal the truth’ about his country’s disastrous World Cup campaign.

The left-back, who was dropped for the South Africa game after falling out with coach Raymond Domenech and fitness advisor Robert Duverne, told TF1 that he intends to call a press conference during the next few days in which he will detail the reasons behind France’s dismal showing this summer;

This apology goes directly to them. I wanted to do it yesterday but I was forbidden by my coach. I’m not going to go into details, I’ll give a press conference during the week.

I really respect the suffering the French are feeling at this failure. They need to know the truth, they need to know exactly what happened that this disaster came about.

People will know how we came to this point. But I didn’t come here to say that now, I came to say sorry. I’ll repeat again that I wanted to say it yesterday but I was forbidden.”

The Manchester United defender then went on to reveal, amongst other things, that he had no idea why he was dropped for the potentially crucial clash against Bafana Bafana last night;

“Tonight there was no valid reason at all for why I wasn’t on the pitch. I’m not a liar, I will tell the truth. People don’t yet know the whole history but you will.

I will detail everything, what I experienced, every minute. Believe me I won’t hide anything, I will tell the truth.

But believe me what I have to say, tonight is not the time. The French need to know and they will know, during the week, as soon as possible.”

Crazy, but that’s how it goes…

England manager Fabio Capello has insisted that he ‘isn’t crazy’ to still be backing his side to reach the World Cup final, despite an underwhelming (to put it politely) start to their tournament.

England have only amassed two points from their opening two games, but Capello believes that a good performance in this afternoon’s game against group-leaders Slovenia will be the catalyst his players need to kick-start their campaign into action;

“We did a good job in getting here but now we’re not in a good moment, but I know this group of players are still good because I’m not crazy when I said my target was reaching the final of the World Cup.

They have shown they are a really good [squad]. This is not about my reputation – that is not important – because we are a team, a group.

Sure, we have to improve and I expect to see the spirit I saw in qualification again, with us fighting in every moment to win the ball back.

But I think if … no, not ‘if’, when we win this game, all the teams will have to fight to beat us.

This is a play-off. For me, it’s like a final or semi-final in the Champions League. We are either in or we are out. Only one result will do. We have to play with that kind of spirit from the first moment and we have to win. We’ll be fit to fight.”

As per usual, Capello is refusing to name his starting XI until hours before kick-off, but the general consensus on Fleet Street this morning is that Jermaine Defoe will partner Wayne Rooney up front, Matthew Upson will fill in for the suspended Jamie Carragher, David James will continue in goal and James Milner will deputise for Aaron Lennon on the right wing after the Tottenham man failed to impress during the Algeria game.

“As players and for me as captain we have to switch our attention to this game because it is a do-or-die situation.”

England skipper Steven Gerrard puts his head on the block.

Ever wondered what David Villa’s opening goal against Honduras the other night would look like if it was recreated by plasticine animals? This way please…

The screaming orangutan chosen to represent Villa is an inspired choice!

Serbia striker Milan Jovanovic may pull out of his deal to join Liverpool to instead join former Reds boss Rafa Benitez at Inter Milan. (F365)

England have been ‘boosted’ by the return to fitness of Michael Carrick ahead of their decisive Group C clash with Slovenia. (BBC Sport)

David Ginola has threatened to sue Gerard Houllier after the former France manager once again blamed him for Les Bleus’ failure to qualify for the 1994 World Cup. (Sporting Life)

The French press are fairly unanimous in their verdict of France’s World Cup campaign, and it ain’t good! (F365)

Today’s (Wednesday 23rd June) round is as follows: