In what may turn out to be the smallest statue ever conceived, the Argentinian house of congress is mulling over a proposal to erect a monument in honour of diddy ‘ickle Diego Maradona – presumably for his services to the drug trade over the years.

The Netherlands booked themselves a berth in a World Cup final for the first time since 1978, after eventually raising their game to see off Uruguay with two crucial goals in three second-half minutes.

After a fairly barren opening period, the Dutch took the lead in the 18th minute when captain Giovanni Van Bronckhorst thundered a long-range shot past Fernando Muslera and into the top corner of the Uruguayan goal.

Bert Van Marwijk‘s men looked woefully short of ideas at times, especially during the first-half, and the South Americans were perfectly happy to sit and wait for opportunities to raid on the counter-attack.

Their patient approach eventually paid off as Uruguay struck back five minutes before the break, with Diego Forlan notching his fourth goal of the tournament.

The Atletico Madrid forward sent a swerving 25-yard effort straight down the middle of Maarten Stekelenburg‘s goal, but the unpredictable swerve on the ball caught the Dutch ‘keeper unawares and, although he got a hand to it, it wasn’t sufficient to keep it from hitting the back of the net.

After half-time the game began to stagnate. A series of bitty fouls constantly served to break up the play, but the funk was eventually lifted in the 70th minute when Wesley Sneijder‘s heavily deflected strike somehow found it’s way into the far corner.

Just three minutes later, Arjen Robben further extended the Netherlands’ advantage – rising to expertly head home Dirk Kuyt‘s cross in off the upright. The Bayern Munich winger then replicated Sneijder’s ‘slap-head’ goal celebration, alluding to the fact that headed goals are something of a rarity in his collection.

Robben then began to impose himself on a tiring Uruguayan back-line and could have added a fourth when, after racing on to Robin Van Persie‘s cute flick, he saw his botched attempt to chip the ball home foiled by Muslera.

The Dutch faced a tense finale after Maxi Pereira had slotted home a well-worked 92nd minute consolation, as Oscar Tabarez‘s men began to bombard their opponent’s box with long-balls – but the perennial ‘nearly men’ of world football held on to secure themselves a place in the final.

“It’s amazing that we have managed to do this. It’s been 32 years. It is unbelievable. We can be very proud for such a small country. This is a World Cup. It doesn’t matter how you do it, it’s all about the result.”

“I think Spain are playing the best football overall, but Germany are perhaps the best team at this championship. I won’t say I prefer to play one team or another but it would be unique to play Germany after 1974.”

Looks like Van Marwijk may actually prefer a final against Germany then.

“It was a hard match, but all that is forgotten now and we are in the final. The most important thing now is to win. We are so close. There is nothing bigger than the World Cup. This is tremendous, fantastic.”

“We are so close to writing history. This is the third time we have reached the final. Now we have to win it.”

Dirk Kuyt is ready to shed the Netherlands’ aforementioned ‘nearly men’ tag once and for all.

“The Dutch can create a goal from any situation. These were beautiful goals for football but rather unexpected for us.”

“We were among the four semi-finalists and the other three are powerhouses of Europe. We know where football in Uruguay stands on a world level. I am proud of the team. You couldn’t ask for more from these players.”

“After many years together, we wanted to go as far as the final, but we were defeated by a very strong side, that’s football.”

De Zeeuw (knocked) out of the final? 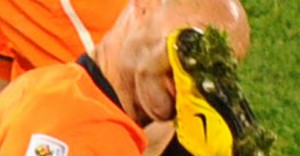 Netherlands midfielder Demy De Zeeuw is a major doubt for the World Cup final after suffering a suspected broken jaw in their semi-final victory over Uruguay.

The Ajax anchor man, who replaced the suspended Nigel De Jong in the Dutch starting XI last night, was taken off at half-time after Martin Caceres attempted overhead kick caught him square in the face – leaving him prostrate on the ground for over five minutes.

Dutch coach Bert Van Marwijk confirmed that De Zeeuw was taken to hospital for scans on his jaw and, if a break is detected, then the midfielder will definitely be ruled out of the final on Sunday. 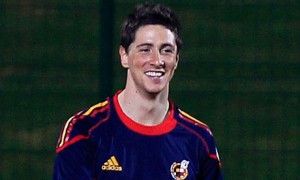 Spain coach Vicente Del Bosque faces a tough decision ahead of his country’s upcoming semi-final clash with Germany tonight, as he has to choose of gambling on a clearly unfit Fernando Torres or a possibly unfit ‘Cesc Fabregas.

Torres is yet to break his World Cup duck and is obviously still feeling the effects of the knee surgery he underwent in March, whereas Fabregas is struggling with a shoulder problem.

Spain managed four shots on target during their quarter-final tie with Paraguay, all coming during the 34 minutes that Fabregas was on the pitch – and if that isn’t an omen, then I don’t know what is! 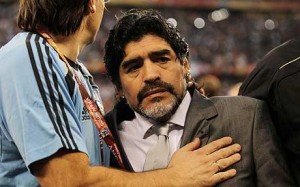 President of the Argentinian Football Association Julio Grondona has insisted that Diego Maradona‘s future as coach of the national team is entirely in his hands.

Maradona has hinted that he may step down following the Albiceleste‘s disappointingly early exit from the World Cup, but Grondona expects El Diego to change his mind;

“Maradona is the only person in the country who can do whatever he wants. He still has a contract with us, so it’s up to him.”

His assistant coach Alejandro Mancuso has also backed the Argentinian legend to stay on;

“Knowing Diego as I do, I don’t think he will step down. We can’t throw out all the good things we’ve done up to now. We’ve grown up a lot as a group.

We know the players and how each of them reacts to a negative situation. If he decides to stay, we have to start working right away.”

In summary, no one’s got a clue what Maradona’s going to do next – as usual.

The man, the monument… 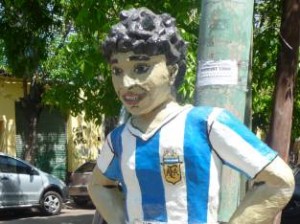 Juan Cabandie, a member of the lower house of the Argentine congress, has sponsored a bill to honour Diego Maradona as an ‘icon of popular Argentine culture’ with a statue in Buenos Aires.

“The Argentine people have shown that, when it comes to Maradona, the results are not important.

Having been eliminated in the quarter-finals of the World Cup in South Africa, in a lopsided loss, thousands of people came to the streets to meet him and his 23 players.”

The Guardian suggest that building a monument would officially place Maradona in the pantheon of national icons, joining former President Juan Peron, his second wife Eva, and Carlos Gardel, the most important figure in the history of tango.

If anyone has the slightest clue what’s going on, please let me know…

“Everyone wishes me luck. I get the impression I’m heading toward suicide, or the guillotine.”

Newly-appointed France coach Laurent Blanc, who truly has inherited a chalice of sh*t.

Social networking website Facebook have denied that they are in talks with the FA about becoming the new sponsor of the England football team. (Guardian)

The England World Cup 2018 bid team have pledged to fund ‘football development projects’ around the world should they win. (Telegraph)

Paraguay captain Justo Villar has slammed FIFA for giving the World Cup to South Africa, claiming that the country ‘isn’t ready’ to host such a major tournament. (F365)

Today’s (Wednesday 7th July) round is as follows: