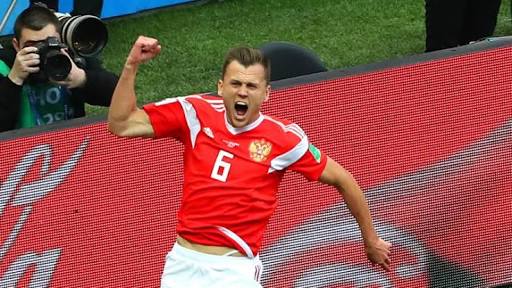 After months of eager anticipation, the 2018 World Cup kicked off on Thursday and delivered excitement and goals as Russia started the tournament with the 5-0 thumping of Saudi Arabia.

The opening ceremony was short and sweet, with Robbie Williams giving the televisions the finger and Vladimir Putin delivering an em, interesting, speech.

News of England’s starting XI for the game against Tunisia on Sunday has been leaked in the British press, while there is a major Mo Salah injury update before Egypt take on Uruguay later today.

Russia start with a bang

Despite all the off-field furore surrounding the World Cup, Russia’s were not expected to do much on the pitch this summer.

However, this perception was well and truly blown out of the water on Thursday night, with the competition hosts putting the Saudis to the sword.

A strong tournament host can only be a positive thing and Russia now look well-placed to make the round of 16. On the other hand, it could be a long couple of weeks for Saudi Arabia.

An early injury for Alan Dzagoev was a real blow for the home side, but Denis Cheryshev took his chance to impress from the bench, scoring two excellent goals after his introduction.

England team has a few surprises

Gareth Southgate’s starting XI to face Tunisia has a couple of unforeseen selections in it, according to reputable source the Guardian.

The Three Lions boss will select Leicester City’s Harry Maguire at centre-half instead of Gary Cahill, Jordan Henderson instead of Eric Dier and Ashley Young over Danny Rose, the report suggests.

Should this be true, England playing only one central midfielder is an interesting feature, with an attack-minded outlook from Southgate.

Meanwhile, Marcus Rashford is back in team training after a slight knock earlier in the week.

Egypt enter the competition on day two and have been boosted by the news that key man Mo Salah is “almost 100 per cent” certain to play.

The Liverpool winger had an incredible 2017-18 club campaign but was injured in the Champions League final after an altercation with Sergio Ramos.

Salah’s subsequent shoulder injury was expected to keep him out of Egypt’s Group A opener against Uruguay on Friday – but coach Hector Cuper has stated the superstar forward will feature.

“We still have to see how training goes today (Friday), but I can almost assure you 100 per cent that he will play – save unforeseen circumstances at the very last minute,” he said.

“We are all very optimistic that he will be on the pitch.”

It is not too late to get involved in the Sportslens Predictor competition – for your chance to win a 50-inch television, click here!