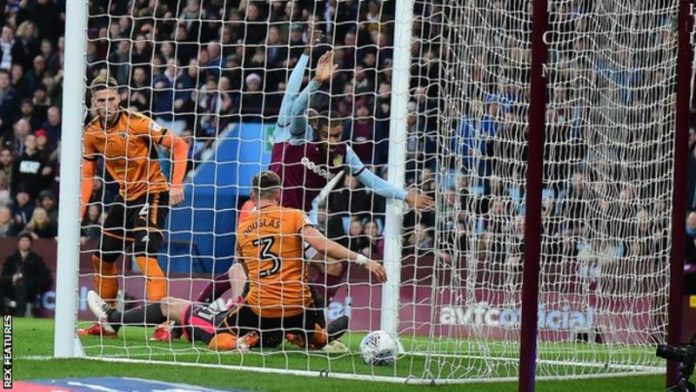 Championship leaders Wolves crashed to their heaviest defeat of the season against Aston Villa last night.

Steve Bruce’s men continued their impressive run of form with a stunning 4-1 win at Villa Park.

Goals from Albert Adomah, James Chester, Lewis Grabban and Birkir Bjarnason sealed a third consecutive win for the hosts. Adomah opened the scoring for the home side but Wolves’ top scorer Diogo Jota levelled soon after.

Chester and Grabban scored two quick goals during the hour mark and Bjarnason scored late in the game to seal the victory.

Meanwhile, Wolves continue their poor run of form and Nuno Espirito Santo’s men have now failed to win four of their last five matches in the league.

The away side are still at the top of the table but Cardiff and Villa are now breathing down their necks. Failing to win the Championship after a heavy spending this season would be a catastrophe for Wolves.

The Championship giants are already being investigated for their transfers and a breach of FFP rules could lead to a points deduction.

Here is how the disappointed Wolves fans reacted to the defeat on Twitter.

Seemed abit strange dragging our two best attacking threats off and leaving somebody that hasn’t scored since December on ?

Bottled it before and it’s happening again…?

Didn’t want it after all then! 3 teams behind us all keep winning and have upwards momentum, we’ve let a 10 point lead at the top go down to 3, 13 point lead over 3rd go down to 7! We’ve been embarassed by 2 out of 3 chasers recently on TV, got the other still to play!

Awful night, just awful, can we bounce back from such a beating?