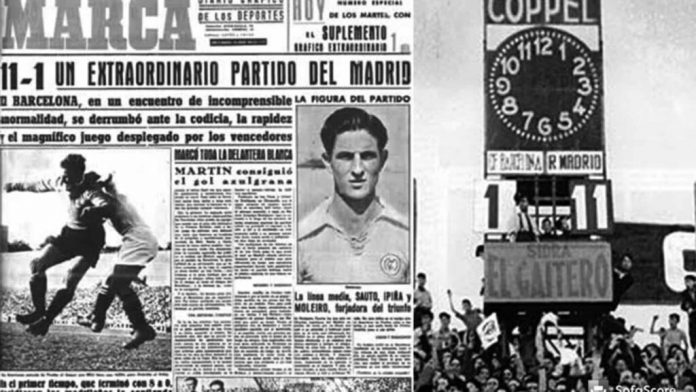 As Real Madrid and Barcelona get ready for El Clasico on Monday, we take a look at how General Franco made things that bit easier for the Spanish giants.

Real Madrid v Barcelona is a rivalry that has been around longer than our parents and even few of our grandparents.

The two teams share a rich and historic rivalry, ranging from exhibition of great football to controversy. This is a rivalry that is deeply rooted in politics.

However, today, we’re not going to get into every single bit of it. Today’s focus is on how a certain General France gave Real Madrid the edge. While the entire Europe was burning following the outbreak of the Second World War, Spain had a dictator of its own in General Francisco France.

The General was a true despot and a man who was responsible for a lot of anti-authority sentiment in Catalonia that still exists to this very day. Camp Nou was the only place where Catalan language was spoken openly. Therefore, we can understand why Barcelona holds a special place in the hearts of the locals.

On June 13, 1943, Real Madrid did something to Barcelona in the Copa del Generalisimo (yes before it was called Copa del Rey), that will forever remain etched into the memories of the Catalan’s followers.

The Blaugrana defeated Real Madrid 3-0 in the first leg before travelling to Estadio Chamartin, Madrid’s humble abode before the Santiago Bernabeu. The Catalans were favorites to reach the final but according to famous historian Joan Barau, the second leg was not a competition to begin with.

Real Madrid get the political edge

According to rumors and accounts from several members of Barcelona’s squad and coaching staff, they were threatened by the fascist police before kick off. According to a legend, the Spanish director of state security threatened the players which pretty much drained them off of all the confidence they had.

The game was General Franco’s way of showcasing the full measure of his powers to the Catalans.

Barau says, “In that tie, [at the Bernabeu], Barcelona were overcome by military pressure and people close to the Falange (the nation’s Fascist and National Syndicalist political party), which heated the atmosphere a great deal.”

Real Madrid won the game 11-1. This was a match that is remembered as a match of shame and result that Los Blancos never really boast about because that is one skeleton in the club’s closet they’d rather never open.