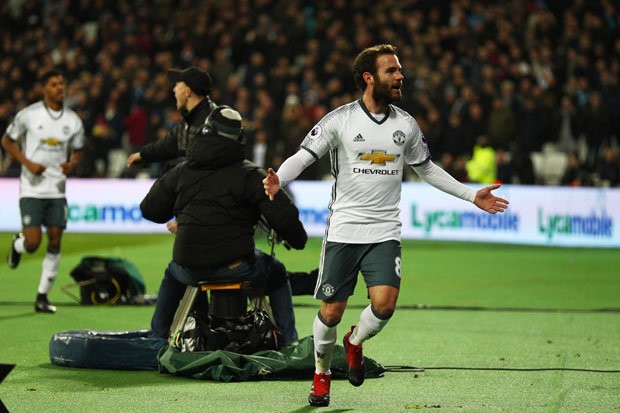 It was a somewhat fortunate but ultimately professional victory for United, with goals from Juan Mata and (obviously) Zlatan Ibrahimovic sealing a 2-0 win in the first visit to West Ham’s new ground, London Stadium. Sofiane Feghouli, making his first Premier League start, was sent off in the 15th-minute, a controversial decision by referee Mike Dean that helped United overcome a somewhat shaky start and see off the spirited hosts. There were a few nervy moments and possibly the miss of the season from Antonio Valencia/Jesse Lingard, but ultimately it was job done for the visitors and a sixth straight win in the league for Jose Mourinho’s side.

LB Matteo Darmian, 5: On a night where United’s attacking quality needed to come out, Darmian struggled to impose himself and wasn’t much of a threat going forward. Reasonably solid defensively but yanked at halftime for the more industrious Juan Mata.

CB Phil Jones, 6: Involved in the sending-off of Sofiane Feghouli, Jones was solid but unspectacular at the back. Had a couple of stray passes—perhaps influenced by the constant boos from the home fans—but was tidy enough. Another clean sheet will do nicely for the reinvigorated 24-year old.

CB Marcos Rojo, 7: Continued his revival at London Stadium despite shifting from center back to left back at halftime. He was assured in the middle, rarely letting Michail Antonio out of his sight, before moving over to the left and combining well with Marcus Rashford.

RB Antonio Valencia, 7: Still cannot believe he couldn’t find the open goal from Mkhitaryan’s cross near the end of the first half (Randolph also had something to say about that), but got forward with aplomb once again and was generally defensively solid. Allowed precious little in the way of West Ham attacks down his side, although could be faulted for playing Antonio onside for West Ham’s best chance of the match.

CDM Michael Carrick, 7: Was out of position a couple of times early on, allowing Manuel Lanzini sights of goal, but returned to controlling the game after Feghouli’s red card. Led all players in passes completed and possession, and played a brilliant ball forward to Rashford before Mata’s opener. Was influential in unlocking an organized Hammers defense.

CM Paul Pogba, 8: A showman with the ball at his feet, Pogba displayed his agility, skill, and power once again with the West Ham midfielders generally chasing shadows. Won aerial duels, put in a few tackles of his own, and saw two curlers flash just wide of either post. Not at his brilliant best, as evidenced by a couple wayward passes, but excellent nonetheless.

CM Ander Herrera, 8: Covered every blade of grass, defended well from the front (e.g. Ibra’s goal), made smart runs into the box, and combined well with the forwards. Fatigue led to a couple of errant decisions, but once again showed his importance to the side.

RM Henrikh Mkhitaryan, 7: Was not as influential as in previous games, but still provided creativity for a United side badly needing it against a compact opposition. Made a number of intelligent runs forward to latch onto crosses/through balls, including sequence leading up to Valencia’s open-goal miss.

LM Jesse Lingard, 6: The 10 men of West Ham were determined to clog the middle of the pitch, and Lingard contributed to the congestion at some points by constantly drifting into the center of the park. His work-rate was once again high, but he was unable to pick holes in the Hammers defense and was sacrificed for the more direct Rashford.

ST Zlatan Ibrahimovic, 8: Created a few chances for his side, including a brilliant cross that started the “open-goal miss” sequence. Was not at his best, but scored the team’s second with a clinical finish into the bottom left corner. Too old for the Premier League, eh?

CAM Juan Mata, 8: The industrious Spaniard continues to prove that he’s an important part of the Mourinho era, scoring the game-winner and giving purpose to the attack when he came on at the interval. Truly an impact substitution.

LW Marcus Rashford, 9: Best player on the pitch when he came on for Lingard in the second half. Constantly committed defenders and beat them with ease, giving Håvard Nordtveit in particular a torrid time. Created Mata’s goal, created another solid chance for Herrera, and had a low shot saved well by Randolph himself.

CB Chris Smalling, N/A: Came in late to maintain a one-goal lead that soon doubled. Was strong in the air against Andy Carroll and defended diligently late on.

1. Juan Mata is finding his role under Mourinho, and it may be as a positive substitute. In back-to-back games, with United needing a goal, Mata has come off the bench and made a huge impact. He provided the assist for Pogba’s winner against Middlesbrough and scored the winner at West Ham. When United flood the midfield and Mata is given license to roam as he has been, the Red Devils are a beauty to watch.

2. United are at their best when wide midfielders aren’t getting in the way of the Pogba-Ibrahimovic combination. Lingard and Mkhitaryan are very tidy and neat in tight areas, but when United clogs the center of the pitch against well-organized defenses, there is a tendency for the pattern of play to become predictable. As we’ve seen over recent weeks, the team is at its attacking best when the wingers are pulling defenders and midfielders out of position (i.e. Martial vs Middlesbrough, Mkhitaryan vs Spurs) and allowing Pogba, Herrera, and Ibrahimovic to run the show. Rashford provided that essential width today, and its no surprise that the opening goal from such a move.

3. Luke Shaw needs to find his way back into the side once he’s fully fit. Darmian is a tidy player, and may be the right choice against better sides who will press United backs for long periods, but Shaw is too dynamic for Mourinho to continue ignoring. He provides width, makes smart overlapping runs, and forces wingers to think twice about abandoning their defensive duties. I’d like to see what this current United XI could look like with a natural, explosive left back in place of Blind/Darmian.

Stat of the Game

76% of United’s attacks came down the left and middle

United knew it had an advantage against the converted right back Nordtveit and exploited that, with Mkhitaryan overlapping with Lingard in support of Pogba and Ibrahimovic. Rashford’s introduction also helped bring even more focus to the left side of United’s attack.

Quote of the Game