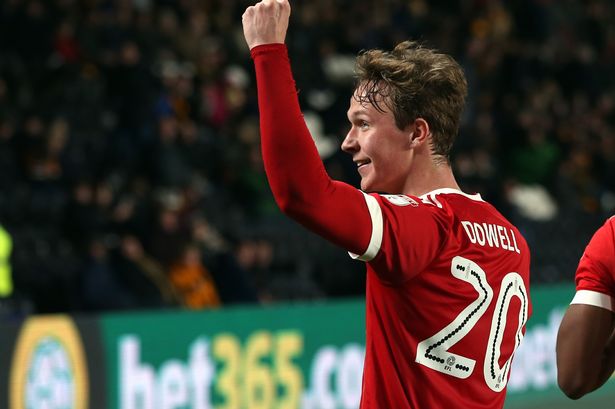 Nottingham Forest manager Mark Warburton has spoken highly of Everton loanee Kieran Dowell, but suggested that it is unlikely that the Championship side will be able to land the midfielder permanently.

The England under-21 international is highly rated at Goodison Park but was farmed out to the City Ground as first-team football on Merseyside was not forthcoming this season.

Dowell has been taking his chances at Forest this term, with the 20-year-old impressing in the Championship.

The attacking midfielder put on a masterclass at the weekend, scoring a mercurial hat-trick as Warburton’s men recorded a morale-boosting 3-2 victory away to Hull City.

The Forest manager has commented on the possibility of Dowell signing permanently for the Reds – but stressed that the decision was up to Everton.

“It’s great to say ‘keep him’ but he’s an Everton player,” Warburton said, according to BBC Sport.

“We are delighted to have him. I think he is really enjoying the move and I hope Everton really benefit from the experience he is getting.

“But don’t lose sight of the fact that he is an Everton player. Everything is geared towards his development.”

Despite the likelihood that Dowell will return to Everton in the summer, the Premier League are unlikely to be able to end his stint at Forest early.

The Nottingham Post state that the struggling Merseysiders do not have a clause in the deal with the Championship side to end the midfielder’s tenure with the Reds mid-season.

Dowell is in line to continue his role in the Forest starting XI as the City Ground outfit travel to face Reading at the Madejski Stadium on Tuesday night.