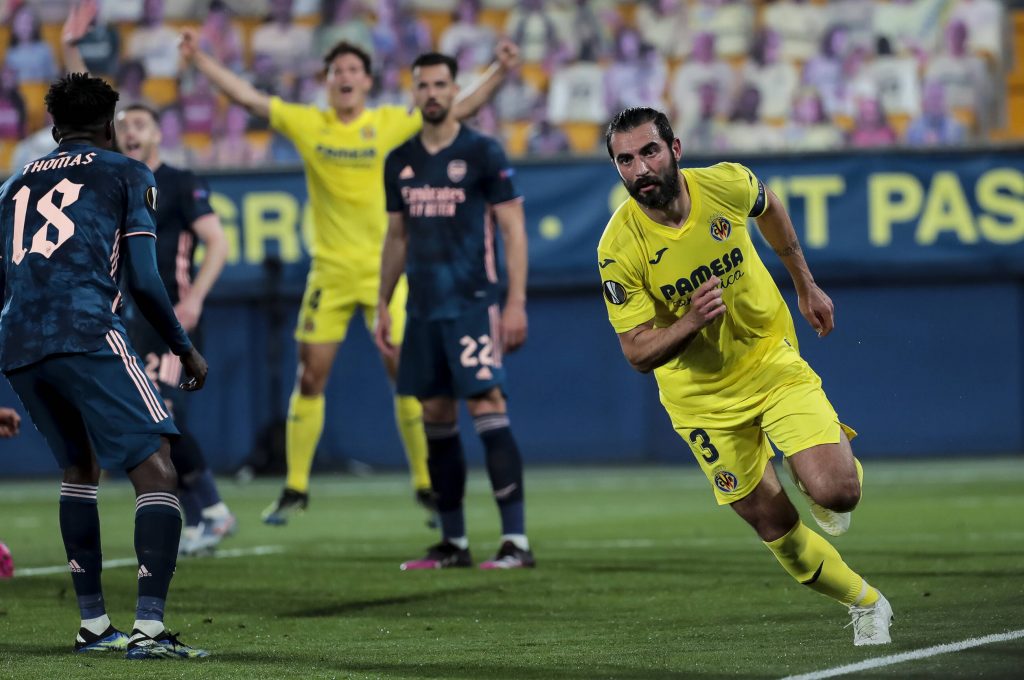 Arsenal suffered a 2-1 defeat to Villarreal at the Estadio de la Ceramica in the first leg of their Europa League semi-final tie on Thursday.

A tense encounter in the province of Castellon saw both sides finish the match with ten men, as Villarreal boss Unai Emery managed to upset his former employers.

Five minutes into the game, Manu Trigueros propelled his side to a flying start, latching onto a rebound to squeeze the ball under Bernd Leno and into the bottom right corner.

Despite dominating possession, Arsenal struggled to create a single clear-cut chance as Villarreal dropped deep and tried to catch the visitors in transition.

The experienced Spaniard was in the right place at the right time to tap the ball into an empty net and give Villarreal a comfortable two-goal cushion at half-time.

The Spaniards barely put a foot wrong in the first period, except for Juan Foyth’s reckless challenge on Nicolas Pepe.

Referee Artur Soares Dias immediately pointed to the spot but revoked his initial call after consulting with the pitch-side monitor due to the Ivorian’s handball in the build-up.

Arsenal clicked into gear at the beginning of the second half but failed to capitalise on their possession of the ball.

Things went from bad to worse for the Gunners when Dani Ceballos was booked for the second time in the 57th minute.

Mikel Arteta’s ten-man side nearly conceded a third goal only a couple of minutes after the Spanish midfielder’s expulsion.

However, Leno, who gifted the victory away to Everton last week, came up big to thwart Samuel Chukwueze’s close-range attempt and keep Arsenal in the tie.

The hosts came close to making it 3-0 again, but the German shot-stopper denied Gerard Moreno in a one-on-one situation.

After wasting a couple of decent opportunities to put this semi-final showdown to bed, the Yellow Submarine were punished.

Trigueros, who broke the deadlock, carried Bukayo Saka down to the ground inside his 18-yard box in the 72nd minute, with Pepe making no mistake from the spot.

The winger’s goal came from Arsenal’s first and only attempt on target but has completely changed the complexity of this tie.

Etienne Capoue’s silly tackle on Saka provided the Premier League visitors with an ounce of hope that they could walk away from Spain undefeated.

The former Tottenham Hotspur and Watford midfielder picked up two yellow cards in quick succession, restoring the balance in the 80th minute.

Unfortunately for Arteta, his players were too tired to exploit the Frenchman’s dismissal.

Exhausted from pursuing an all-important away goal, the visiting side failed to produce anything meaningful in the front third until the final whistle.

This result gives Arsenal and Villarreal everything to play for in the rematch at the Emirates next Thursday.