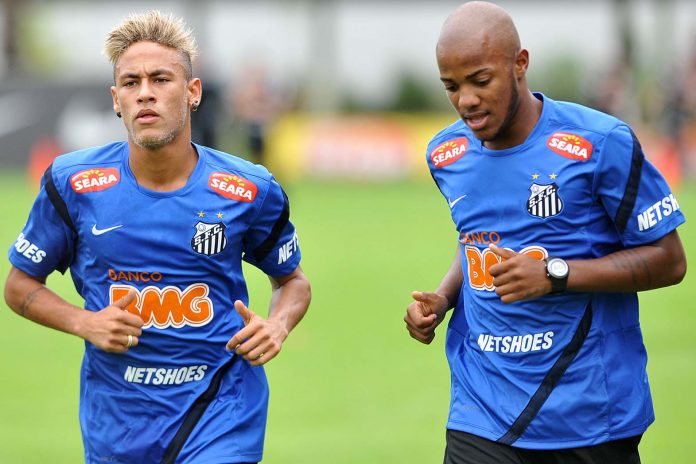 Victor Andrade right has recently revealed he wants to join one of Europe’s elite, as he searches for a ‘new challenge’.

Chelsea, Manchester City, Real Madrid, and Barcelona have been tracking the progress of the wonderkid – who has been tipped for great things.

The 17-year old has emerged as a real prospect for the future during his short time as a professional with Campeonato Brasileiro Série A side Santos. Dubbed ‘the new Neymar’, the pair pictured were teammates last season, and Andrade is hoping he can eventually step into his shoes.

He made his league debut for Santos in a brief cameo appearance against Fluminense. Santos drew 1-1. That season, he went on to make 19 league appearances in total, scoring three goals, and making two assists.

Sources close to the club and the player have admitted Andrade has received interest in his services, but are hoping he will continue his development in Brazil before seeking pastures anew.

‘Victor is a wonderful talent, but we and his family are calm and we are confident his future will be resolved at the right time, in the right way.’

Every top side across Europe and around the world have been linked as potential suitors for the youngster, and Andrade has revealed he’s keen to follow in his godfather Robinho’s (currently at AC Milan) footsteps.

‘I would love to play in Europe. My godfather Robinho has told me of the great experiences he had at Real Madrid, Manchester City and AC Milan. He told me how it made him a better player because playing in Europe means you must adapt to different styles and systems. I think it will be a great education for me.’

The Brazilian added how it was his dream to represent his country in the World Cup, and how he hopes he can become as talismanic at club level as former player Neymar did during his time with Santos.

There has been no official word on his preferred destination this summer, but he admitted being in awe of the Premier League and the challenge he would face there – which has put a number of English clubs on alert.