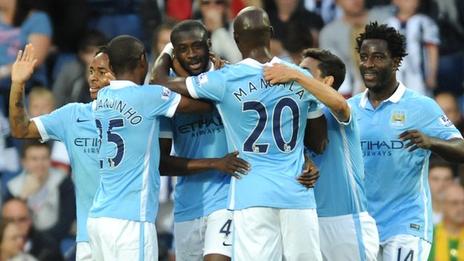 Manchester City dominate the British press on Tuesday morning after their mightily impressive 3-0 away win over West Brom on Monday night.

Manuel Pellegrini’s men romped to victory at the Hawthorns, with David Silva and Yaya Toure the chief protagonists for the 2013-14 Premier League champions.

The Ivorian midfielder, who’s City future was something of a doubt earlier in the summer, netted twice, with captain Vincent Kompany securing victory with the third goal.

Debutant Raheem Sterling put in an industrious display but botched the opportunity to open his Citizens account as Boaz Myhill saved a one-on-one effort from the former Liverpool man.

Ever-reliable source The Guardian are reporting that Pellegrini’s men want to seal a deal for former Chelsea star Kevin De Bruyne this week, with the Etihad Stadium outfit reportedly lodging an eye-watering £47 million bid for the Belgian.

The skilful midfielder was not given an opportunity at Stamford Bridge but has shone since moving to the Bundesliga; he was Wolfsburg’s talisman in finishing second in the German top flight last season.

The report also insinuates that City hope that De Bruyne will lodge a transfer request to force a move away from the Volkswagen Arena.

The Guardian are also reporting that Chelsea are on the verge of sealing a deal to bring highly-rated Augsburg left-back Baba Rahman to Stamford Bridge.

The reigning Premier League champions are in the market for a new full-back after allowing Filipe Luis to return to Atletico Madrid after a solitary disappointing season in West London.

The report states that a fee in the region of £20 million is likely to persuade the Bundesliga outfit to part company with the Ghanian defender, with £14m to be paid up front.

BBC Sport are also claiming that Chelsea are set to appeal Thibaut Courtois’ red card from the weekend’s clash against Swansea, with the FA listening to the case today.

As Manchester United look to make progress in a deal to bring Barcelona forward Pedro to Old Trafford, the Spain international has been told to avoid the historic English club by Hristo Stoichkov.

The outspoken Bulgarian was part of Louis van Gaal’s squad at Camp Nou during his playing days, but has little admiration for his former boss.

“I would never be under the orders of van Gaal. He’s mediocre. He destroyed Barca and is destroying Man Utd,” Stoichkov told Spanish radio Onda Cero.

“With what he has done to (Victor) Valdes he has shown he is a bad person. Hopefully Pedro listens to me and doesn’t leave.”

Finally, Spanish rivals Barcelona and Sevilla are set to go head-to-head for the first European trophy of 2015-16, as they meet in Tblisi to contest the Uefa Super Cup.

The Catalan powerhouses will enter the clash as favourites with the bookmakers after completing a monumental treble last term in Luis Enrique’s first season in charge, with current Ballon d’Or favourite Lionel Messi set to start for the Blaugrana. If you’re betting on the game, you can get 3/1 odds on Barcelona beating Sevilla through Favourit’s enhanced odds special offer here

Barca will be without hamstrung left-back Jordi Alba and ill Neymar, but will more than likely field a full strength side beyond this, as they look to win an unheralded six trophies in one calendar year.

Sevilla have proven themselves as a seasoned European side, winning the Europa League last term for the second consecutive season.

Exciting Ukrainian summer addition Yevhen Konoplyanka is in consideration for a start, but former Stoke man Steven N’Zonzi will not feature due to injury.