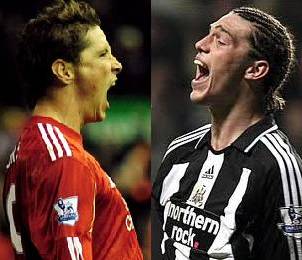 For the first time in a long time, the transfer deadline day actually lived up to it’s monstrous, gossip-driven hype.

Over the course of 24 hours of prime pantomme, we witnessed both the fourth and the eighth most expensive transfers of all time take place, with Chelsea bagging themselves a new number nine and Liverpool taking 35 million steps to fill the void left thereafter.

Here’s your round-up of all of yesterday’s prime ‘movers and shakers’.

Striker Fernando Torres beat the 23:00BST cut-off by a matter of minutes to eventually complete his £50 million move to Chelsea from Liverpool.

“I am very happy with my transfer to Chelsea and I am looking forward very much to helping my new team-mates this season and for many years to come.

Having played against Chelsea many times since coming to England, and in some very big games I will never forget, I know there are many great players here and I will work hard to win a place in the team.

I hope I can score some important goals for the supporters to enjoy this season.”

Rather predictably, upon hearing the news mobs of livid ‘Pool fans took to the streets to burn ‘Torres’ replica shirts.

Classy…and not at all ‘hideously reactionary’ and/or ‘ridiculously unmerited’.

Anyway, you can read Soccerlens‘ full report (which includes photos of Nando posing with his new blue jersey) by following this ‘ere link.

Having broken their transfer record once already by doling out £22.8 million for Ajax forward Luis Suarez around tea time, Liverpool saw fit to put the boot through their record once again just a couple of hours later – when they snapped up target man Andy Carroll from Newcastle and payed £35 million for the privilege.

Both the Torres and Carroll transfer sagas ran parallel for the majority of the day, each deal’s fate intertwined with the other, and as soon as Chelsea returned to Liverpool with a £50 million bid for the former, Liverpool were able to stump up the £5 million extra needed to successfully trump their opening £30 million gambit (which was rejected) for the Toon striker.

There were reports that Alan Pardew had also rejected Liverpool’s second offer, though it later emerged that Carroll handed in a transfer request over the course of the afternoon – thus making it clear that the boy who’s only dream it was to ape Alan Shearer in the annals of Newcastle folklore had decided that his future lay elsewhere.

One thought: Under the terms of his bail agreement, will Carroll now have to live with Steven Gerrard?

It’s worth noting that Chelsea spent £75 million on new faces yesterday as, along with furore caused by a certain Spaniard’s defection, the Blues also dished out £25 million on Benfica centre-back David Luiz – just a day after the Portuguese club issued a statement to say that the deal was ‘dead in the water’.

Speaking via the club’s official website, the 23-year-old defender issued a brief statement of intent:

“I am delighted to be joining a big English club, and I know very well the quality that Chelsea has.

It is a major challenge for me but I am determined and confident in my ability to adapt to this excellent league, and I look forward to meeting my new team-mates.”

As the deadline loomed, Luiz put pen to paper on a five-and-a-half year deal at Stamford Bridge.

Despite a rolling boil of underlying rumour and conjecture, Charlie Adam has woken up today as a Blackpool player – rather than at Liverpool, Manchester United or even at Tottenham.

Throughout the course of yesterday, several thousand ‘leaks’ made their way onto the live blogs of several national newspapers/corporations, telling of various ‘Adam sightings’, i.e. at Liverpool’s Melwood training complex, in a cab on the way to Carrington, eating a BLT at Spurs Lodge…etc…etc…

According to those diligent bods over at Sky Sports News, Tottenham indeed had two late bids turned down for Adam though, as with most of the hyperbole flung at you by Murdoch’s over-excited minions on deadline day, their reports remain unsubstantiated.

The best of the rest…