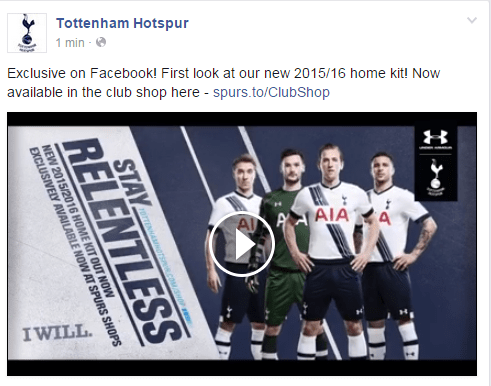 Tottenham Hotspur have released their new 2015-16 Home Kit, featuring a sash for the first time in their club history.

As per the tradition, the new 15-16 home kit is all white in colour, but there is an added striking sash design on the front. The all new black Sash design gives a fascinating colour contrast that is interrupted for the AIA sponsor logo, which is deep red in colour.

The new strip will be worn by the players for the first time in tomorrow’s final home fixture of the season against Hull City.

The new 15-16 home kit gives a traditional and yet a fresh feel to the design, and it has been revealed with the slogan ‘Stay Relentless.’

Tottenham Hotspur fans will be happy to see the Harry Kane, the club’s top goal scorer this season, in the the new 15-16 kit. It is comforting in the sense, the new kit has been released on the day when The Times, UK’s most popular newspaper, published an Exclusive that Manchester United are plotting an audacious move to sign Kane in the summer.

Let us know what you think of this brilliant Tottenham 15-16 New Home Kit?

Posted by Tottenham Hotspur on Friday, 15 May 2015