The official blurb of the Times Fantasy Football game reads as following:

Use skill and judgement to manage your team throughout the season. Players score points according to their on-pitch performances for their real-life clubs. You can make changes to your selected players so that you can maintain your edge by transferring the non-performers and hiring in-form stars.  We’ll even let you make player loans to further strengthen your position.

In addition our Premier Play game gives you the chance to show your prediction prowess in our new, free-to-play game every weekend. It’s simple, fun and only open to entrants of our Fantasy Football game. You could win £500 every weekend!

Playing Times Fantasy Football couldn’t be easier. Just Pick, Pay and Play.  Three simple steps to get you started on the road to Premier League glory and big money prizes.”

Impressed? You should be! A hundred grand prize kitty for a three quid outlay is decent odds by anyone’s standards. The Times Fantasy Football (TTFF) offers managers the chance to not only fuse English & Scottish Premier League teams- something the likes of Dr John Reid & Sir David Murray can only dream of- but also to pick up some serious winnings. Interested? Thought so.

If the Telegraph goes for simplicity, and the Guardian opts for complexity, then TTFF falls pretty much slap bang in the middle of the two- complicity perhaps? No fancy graphics to set your side up, no maths-degree required to figure out Roman Bednar’s points tally for Gameweek 8, but enough diversity to keep the more knowledgeable fan interested, for sure.

TTFF opts for the Guardian/Fantasy Premier League approach, a nice round £100m is available to all managers at the start of the season, and player prices are pretty sensibly set, with Petr Cech, Rio Ferdinand, Cristiano Ronaldo & Fernando Torres leading the way in terms of value. The addition of SPL players throws an unexpected spanner into the works, with the likes of Shunsuke Nakamura, Scott McDonald & Giorgios Samaras well represented in the value lists. No, seriously!

Told you it was somewhere in between complexity and simplicity, didn’t I? With TTFF, managers have to pick only eleven players- no subs required here, with no limit on the amount of players you can pick from any one side. Hence the high values placed on Celtic/Rangers players, they might not be as good as some of their English counterparts, but they earn some serious points up in that SPL cakewalk!

Formation-wise, managers have a choice of four- each handily drawn out on the site, as seen below: 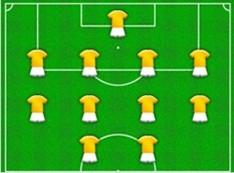 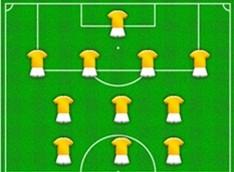 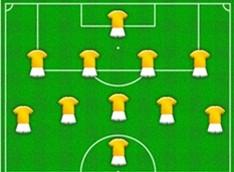 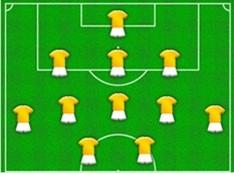 So whether you are a Rafa or a Wenger, a Fergie or a Big Phil, you should be pretty well stocked for tactical ideas. Either pack the midfield with goalscoring talent, stick to tradition, or go all out with three forwards, it’s your choice. There’s no limit to the number of formation changes in the season so long as you have sufficient transfers and loans available as well, which helps.

Ok, here’s where it gets slightly different to the other games. Nothing to weird about the points system itself, that looks pretty standard to me (see below), but in this game not only do we have the SPL involved, but also…..wait for it……the UEFA Champions League & UEFA Cup too. So gone are those midweek Fantasy lulls where you are simply waiting for the weekend’s league programme. Selecting players who will be playing in Europe this season (so no Everton players then? Ho ho ho) gives managers double the chance to earn points, and makes even the most dull of Channel Five-screened UEFA Cup dead rubbers bearable. The points system is shown in full below:

In addition to this, there is the “Captain” feature, which allows managers to select a captain, whom will receive double points. Handy when Manchester United are playing Stoke at home and Cristiano Ronaldo is in that mood. One stipulation of the captain system though is that you can only switch skippers 5 times during the course of the season, something I believe Mr Wenger has complained about already!

In terms of the top points scorers so far this season, it is pretty much the usual suspects, with a smattering of SPL faces in there too, here are the top ten, as of 24.1.09:

Obviously the points system means that players performing in Europe regularly are likely to pick up most points- hence the inclusion of Crouch & Adebayor in that list- which does tend to encourage managers to lean towards the bigger clubs and players, but with the UEFA Cup & SPL in there too, there is merit in selecting less high profile names who are likely to pick up points in less high profile games.

Not happy with your player selections? Make up to 20 transfers during the season. To be honest, this to me is not enough, but then I have a reputation as an FTM (Fantasy Tinker Man). Some would argue that this encourages continuity in a side, but not me.

In addition to transfers, you can also make 5 player loans during the season, each lasting 4 games. Take a loan player in place of one in your line up and keep him for a duration of four games for his real-life club. When the loan expires, the player he replaced returns automatically! It’s a neat addition which comes in uber-handy when suspension or a niggling injury hits one of your team.

As with any other game, why not compete against your family, friends and colleagues by inviting them to join your own private Mini League? You still compete within the Main Game but also have the chance to demonstrate your fantasy football management prowess with the people who really need to know about it, and know about it, and know about it….. And there’s the small matter of a £15,000 prize for the best-performing Mini League and the chance to win an extra £5,000 for you if you set the league up. You will automatically be entered into our Chairmen’s League. You’ll need a minimum of 5 people to create a Mini League but there’s no maximum limit. The leagues are well administered, as expected, with a message board to get the Fantasy Banter going too.

As mentioned at the start of this review, TTFF offers plenty of incentive to do well, with over £100,000 at stake overall. This breaks down thus:

Top the Chairmen’s League by being the highest scoring Chairman of a Mini League and win £5,000.

It really is impressive stuff, and coupled with the site’s “Premier Play” predictions game, which offers a weekly prize of £500, it is one of the best prize funds out there in Fantasy Land. In my opinion anyway. The £3 outlay can put some people off (and we all know how tight I am), but once it is paid, you can relax and look forward to the prospect of a £50k prize kitty coming your way, and all thanks to Super Kris Boyd and his magic boots!

Excellent. I am a big fan of the Times’ football coverage. They combine ruthless statistical dedication, with insightful and witty analysis. There are plenty of tips and pointers on the site for Fantasy managers, and their football articles are second to none. There is even a “Gamble Responsibly” article to cover their arses- impressive stuff- and the site is easy to navigate, although perhaps a bit too statistically-orientated for some people, but I am nit-picking there. I couldn’t help myself!