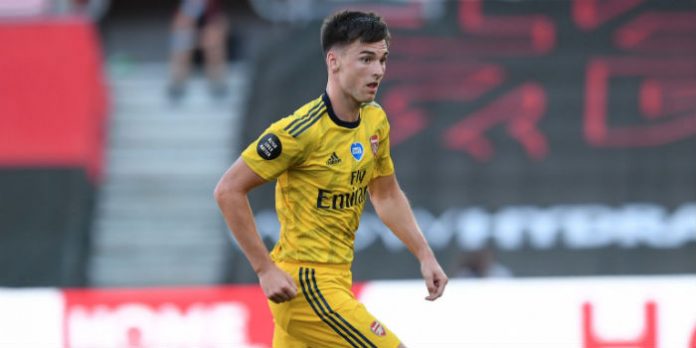 Kieran Tierney is an injury worry for Arsenal after the Scottish player limped off at Southampton. Fans have been impressed with the left-backs performances since the Premiership resumed.

Fans flocked to Twitter to shower praise on the 23-year-old defender, with some even backing him to become future club captain.

One fan called Tierney’s performance a “spotless, perfect performance” while making the prediction.

Another fan celebrating the victory hailed Tierney’s ability after the performance at Southampton on Thursday.

Tierney’s injury adds to the list of long term injuries picked up by Pablo Mari, Gabrielle Martinelli and, Bernd Leno since games restarted.

More medical tests are due to determine how serious the injury is but Manager Mikel Arteta will be hoping for good news.

It was a much-needed victory at St. Andrews, a venue Arsenal don’t normally enjoy success.

The Gunners ran out 2-0 winners but not before encountering a Saints resistance.

From the kick-off, Arsenal started with a high tempo and an early chance fell to top scorer Pierre-Emerick Aubameyang. The forwards’ strike rocketed off the underside of the bar without crossing the line, letting the Saints off the hook.

Arsenal took the lead when Eddie Nketiah forced an error from Southampton keeper Alex McCarthy for a simple finish.

Southampton improved as the game wore on, forcing the Gunners on to the back foot with goalkeeper Emilio Martinez making a great save to maintain the lead.

Jack Stephens saw red late in the game for a foul on Aubameyang which led to Joe Willock’s match deciding goal.

Speaking after the game, Manager Mikel Arteta said “We had two very difficult weeks. I was concerned after the defeat at Brighton, it really touched the team but I could see yesterday the reaction was really positive.”

“I know what this team can do when we’re at 100 per cent but if not we’re average” he added. (source The Metro)