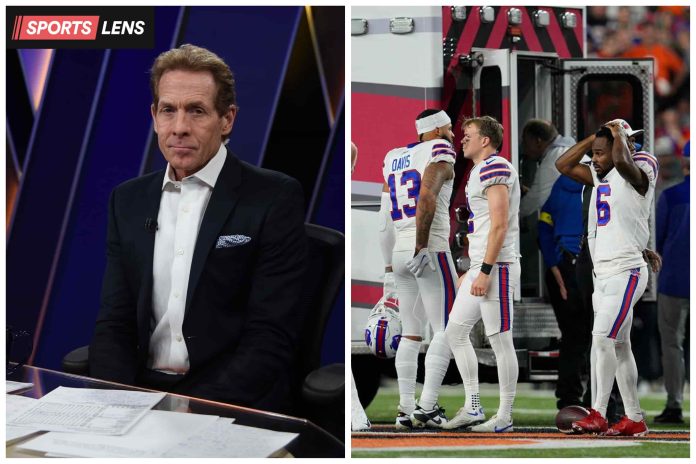 Skip Bayless may have won the competition for being cancelled the quickest following a bizarre tweet in the aftermath of Damar Hamlin’s on-field cardiac arrest during the Bills clash with the Bengals.

The former ESPN commentator turned Fox presenter is no stranger to controversial quips and has made a living out of outlandish hot takes, but this latest opinion has ruffled the feathers of fans and fellow experts.

The match-up between Super Bowl contenders Buffalo Bills and Cincinnati Bengals was suspended following Damar Hamlin’s on-field collapse, which was later confirmed to be the result of a cardiac arrest.

Indeed, suspending games altogether is a rarity in the NFL despite the nature of the sport being the cause of some sickening head injuries, concussions and broken bones. However, a situation as severe as this has left the football world in a state of shock and the silence that fell across the Paul Brown Stadium was unsettling.

Skip Bayless is of a different opinion however, and took to Twitter to express his bafflement as to why the game had been suspended despite being built-up as one of the the heavyweight clashes in the penultimate round of the regular season.

No doubt the NFL is considering postponing the rest of this game – but how? This late in the season, a game of this magnitude is crucial to the regular-season outcome … which suddenly seems so irrelevant.

As you would expect, the tweet was met with a monumental wave of backlash from the football community, with many of the 100,000 replies labelling Bayless’ take as ‘disgusting’ while others including 12-time NBA All Star Isiah Thomas called for him to be fired from his broadcasting role.

This is so disgusting.

I hope they fire you bro!!! For you to even THINK of the game is very sad.

One of the worst tweets in sports media history.

Bayless was later forced to back-track on his comments, taking to Twitter again to apologise for what he perceived to be a misunderstanding from followers.

Despite this, many believe this could be the straw that broke the camels back for the TV personality who has a long history of bloated takes and inciting controversial talking points.

Nothing is more important than that young man's health. That was the point of my last tweet. I'm sorry if that was misunderstood but his health is all that matters. Again, everything else is irrelevant. I prayed for him & will continue to.