Thierry Henry has officially made his first tentative steps into semi-retirement after finalising his protracted move from Barcelona to the New York Red Bulls this afternoon.

After three largely underwhelming years at the Camp Nou, the 32-year-old striker has joined the MLS outfit on a ‘multi-year’ contract – although the actual terms of the deal are as yet undisclosed.

A statement issued on the club’s website reads thusly;

His debut for the Red Bulls is expected to be on July 22 against English Premiership club, Tottenham Hotspur, in the Barclays New York Challenge at Red Bull Arena.”

The former Arsenal forward, who will be officially unveiled to the press at a media conference on Thursday at Red Bull Arena in New Jersey, is relishing the prospect of (drum roll please…) trying his hand in the American leagues, telling the site;

“This marks an exciting new chapter in my career and life. It is an honour to play for the New York Red Bulls. I am fully aware of the team’s history and my sole goal during my time here is to help win the club its first championship.

Knowing Red Bull’s significant commitment to soccer locally and internationally, I am confident that my team-mates and I will succeed.” 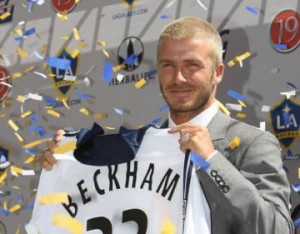 Henry’s move to the Red Bulls is very much being spun by the club as a fairly prosaic ‘global star in his prime’-style coup, in stark contrast to the grotesque Hollywood sheen that was used to hype David Beckham‘s arrival in the MLS last summer – a PR storm that polarised many impartial observers.

A companion piece published alongside the aforementioned statements on newyorkredbulls.com contains some fairly misguided guff which details the subtle differences between Henry and Beckham’s respective transfers;

“Henry comes in his prime, a player one year removed from being the catalyst for Barcelona’s dominant run through La Liga and the Champions League.”

“It was Henry, after all, who created a stir with followers of the English Premier League, selling tens of thousands of Arsenal jerseys in this country.”

Surely it’s fairly insulting to measure the impeccable form he consistently produced at Highbury over the years in merchandise sales?

“Thierry Henry belongs to us. In his prime no less.”

“From his fashion to his hair to the shirtless posing, Beckham earned his critics for the business side of his brand. Henry comes with no such baggage.”

“Henry is not saddled with the hype and controversy of Beckham.”

I can think of a few million Irish people who may disagree.

Try as they may to differentiate between the pair’s moves to the MLS, the parallels are fairly obvious – both are/were relatively ageing superstars who watched their careers begin to wane in Spain, and therefore opted out in a bid to seek one last bout of total admiration before calling time on their glittering careers with a freshly topped-up bank account.

The only difference is the prominence of  the accompanying bullsh*t.

Whereas there’s no doubting Henry’s class, his legs have begun to go now (as we witnessed last season at Barca) and it’s hard to view his Stateside endeavour as anything other than a lucrative halfway house between his golden past and the knackers yard.