Premier League champions Manchester United are “very close” to signing Thiago Alcantara, following emergence of reports, that the Red Devils have all but wrapped up the deal to lure the Barcelona prodigy away from Camp Nou this summer.

Manchester United are looking to trigger the 22-year-old’s release clause of £16-17 million, that has plummeted from £77 million, after the Spanish champions failed to adhere to Thiago’s clause of sufficient game time. 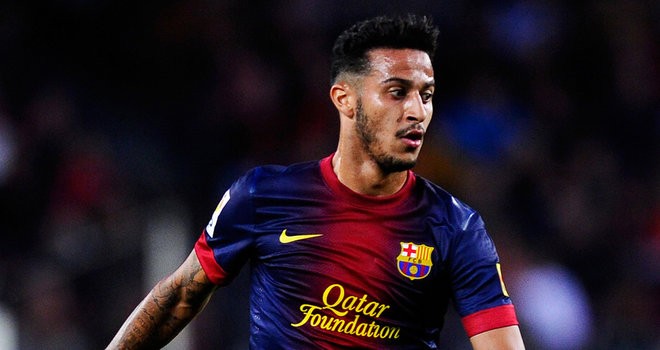 While, Barcelona have tried their best to convince the youngster to stay at the Catalan club, Thiago seems to have made up his mind already, with numerous reports claiming that that Spaniard is keen to move on to greener pastures.

The La Liga giants were given a flicker of hope after Thiago posted an Instagram picture of himself and his brother, Rafinha, who also plays for Barcelona, with the message, which read: I love Barcelona.

While there are suggestions that United may even the announce the deal at David Moyes’ first press conference as a United boss, but the Catalan based newspaper, El Mundo Deportivo believes that negotiations are yet to take place between both the clubs over the future of the player.

United are growing increasingly frustrated over the long and drawn out transfer saga and have likened it to the case of Wesley Sneijder situation in 2011.

Previously United have been left red faced in their pursuit of players like Mesut Ozil, David Silva, Sneijder and Karim Benzema, who eventually got away despite negotiations reaching advanced stages.

Earlier, Spanish newspaper Sport reported that Thiago is demanding an escape-clause in his Manchester United contract, similar to the one he has at Barcelona, which would allow him to leave, if he did not make a required number of appearances.

It is however understood that such clutter of doubts have been wiped away, as the United hierarchy seems to have convinced the player’s father, Mazinho that his son would get regular games at Old Trafford.