With a conspicuous absence of any defensively-minded players on FIFA’s Golden Ball award shortlist, you could be forgiven for thinking that there weren’t any outstanding back-line performers at this summer’s World Cup – but one quick delve into glorious retrospect reveals this not to be the case.

In a tournament which came to be defined by the majority of it’s participants decision to opt for staunch resilience over attacking flair, it came as a slight shock that FIFA singularly failed to recognise a single defender (or goalkeeper) in their list of Golden Ball nominees.

The closest they came is probably the inclusion of Germany’s Bastian Schweinsteiger who, in fairness, operated in a dual deep-lying central midfield partnership with Sami Khedira – although it was the latter of the two that functioned in the more orthodox ‘holding man’ role.

It’s time to redress the balance.

Perez was an ever-present in Uruguay’s run to a fourth-place finish and was just as instrumental in La Celeste‘s over-achievement as eventual Golden Ball winner Diego Forlan – although the Monaco midfielder’s role in the side attracts little of the glory that comes with being a five-goal national hero.

Committed and competitive but never straying into the realms of Van Bommel-esque gamesmanship, the word ‘tireless’ doesn’t even come close to describing the diminutive scrapper’s performances in South Africa.

Incidentally, Perez was my personal player of the tournament by quite a margin. 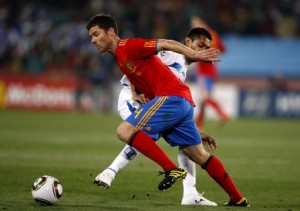 Alonso is a rare commodity in the modern game, in that he effortlessly combines a innate propensity to ‘destroy’ with a classy ability to ‘create’ – not a combination you come across often these days.

He never bemoans any rough treatment, never reduces himself to waving imaginary yellow cards around (Sergi Busquets could learn a thing or two) and has a range of passing that often puts Xavi in the shade. 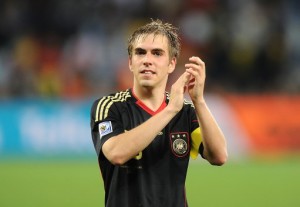 An international veteran of some 71 caps at the relatively young age of 26, Lahm is a stalwart in the German side for good reason – chiefly because he has been one of their most consistent performers for the best part of half-a-decade now.

The versatile Bayern Munich full-back was charged with standing in for the injured Michael Ballack as an auxiliary captain during the World Cup, and rose to the challenge admirably with a series of outstanding, flank-raiding displays. 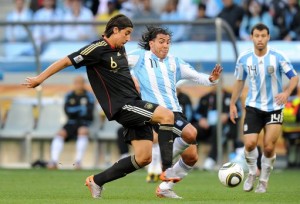 As part of Die Mannshaft‘s engine room (along with the excellent Schweinsteiger), the Stuttgart anchor man went about his purpose with such gusto that the absence of the aforementioned Ballack was hardly mentioned.

Covered the hard yards throughout the tournament, thus allowing the more technically adept members of Joachim Loew‘s young side to flood forward on the counter-attack – which they did to dazzling effect on a near game-by-game basis.

For all the graft he consistently displayed in front of his defence, it was also Khedira that popped up in the Uruguayan penalty area to nod home and secure the Germans a bronze place finish during the third-place play-off game.

The flying full-back somehow manages to couple being an erstwhile right-back with the dual role of being Brazil’s ‘playmaker in chief’, as nearly every one of the Selecao‘s forays forward during the World Cup were instigated by his endless endeavours up and down the wing.

His spectacular goal against North Korea instigated one of the most heated ‘did he?’/’didn’t he?’ debates of the tournament and his overall display served to reinforce that fact that he is currently, without much reason to doubt, the best right-back in the world.

There are a couple of players I’ve had to leave off the list for editorial reasons (Denmark’s Simon Kjaer, Paraguay’s Antolin Alcaraz, Spain’s Gerard Pique etc.) but if you feel like I’ve been unfair in omitting anybody in particular, then feel free to make your suggestions heard!