Thursday saw another seismic NFL contract secured that will once again alter the quarterback market, with Arizona Cardinals tying down Kyler Murray until 2028.

The number one overall pick in the 2019 NFL Draft, Murray will earn in excess of $230million with $160 million guaranteed over the next five years, thus launching him straight into second place in terms of most guaranteed money in NFL history.

At just 24, Murray is the youngest among the top five quarterback money-makers, but his game has improved by leaps and bounds since his rookie season earning him acclaim such as Rookie of the Year and two Pro Bowl selections.

This follows months of back and forth between the Cardinals and their quarterback, who removed any association with the Arizonians on his Instagram page in a gutsy attempt to leverage an improved contract.

So, with Kyler Murray skyrocketing into second place on the highest-earning quarterbacks list, we are taking a look at the other athletes who feature in the top five.

Former NFL quarterback Chris Simms said; “The things this guy is capable of doing on an everyday basis, he is a freak of nature,” while team-mate Dawson Knox is quoted as saying, “Tt’s everyone’s dream to play with a guy like that. I mean, he can put the ball 70 yards down the field, or throw off his back foot back across himself, or make plays with his legs and extend plays.”

He, along with Mahomes, Watson and Murray are seen as the era-defining quarterbacks emerging over the past few years.

Patrick Mahomes’ is somewhat of a god in Kansas, which has seen him secure a mammoth contract to the tune of $450million. 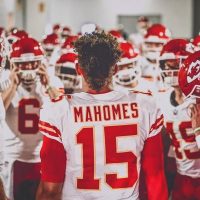 Coming in at third we have Deshaun Watson who has emerged as one of the brightest sparks in the NFL.

After a falling out with former team Houston Texans, Watson became disenchanted by the team’s poor personnel moves and failure to uphold a pledge to include him in the search process for a new coach.

Fast forward to now, the Cleveland Browns offered him one of the most lucrative contracts ever seen in the NFL back in March, and while mutterings of off-field allegations continue to surround the 26-year-old, there is no doubt over his talent.

The Packers have had a monopoly over the NFC North in the Aaron Rodgers-Matt LaFleur era, storming towards victory in the division in each of the three years the duo have been operating together.

Even in light of Kyler Murray’s contract extension, the 38-year-old will earn $6million more highlighting his importance to Green Bay.