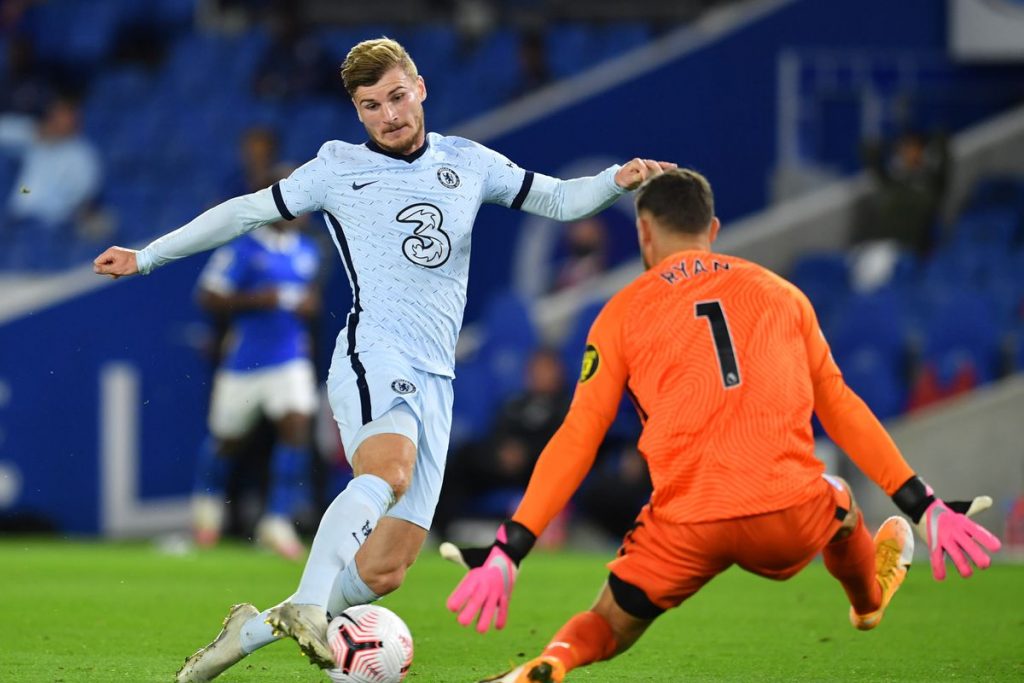 Frank Lampard’s new look Chelsea side started the new season on the right foot with a  3-1 victory over Graham Potter’s Brighton last night, with defenders Reece James and Kurt Zouma amongst the goals. It wasn’t a totally convincing performance, with Brighton arguably dominating much of the first half and portions of the second and this performance will certainly have left Chelsea fans with questions regarding some fan favourite players and whether they have the quality to be a part of a title challenge in the near future.

The New Kids on the Block

Making their debuts in this game were new big-money signings Timo Werner and Kai Havertz, with Werner starting in his preferred striker role and Havertz being deployed off the right hand side due to the notable absence of Hakim Ziyech, where he certainly put in a largely subdued performance. Despite Werner not getting on the scoresheet, his energy and pressing really impressed me and I think he will again prove he is one of Europe’s leading marksmen this season.

Lampard also experimented with a new formation, setting Chelsea out in what seemed to be a variation between a 4231 and a 4222 in order to adjust to a growing injury list. The tactical setup saw Werner playing as a false 9 with one of Havertz, Mount and Loftus Cheek rotating in front of Werner to hold up the ball and give Werner space to run in behind. This was largely ineffective. Loftus-Cheek was extremely poor, he gave the ball away far too easily, looked lethargic and frankly a shadow of his former self. It’s common knowledge that Ruben suffered one of the worst injuries in football, a ruptured achilles, which kept him out for the majority of last season and so its natural that he will need time to get back up to speed in the Premier League. If there’s one thing however that the modern footballer does not have the luxury of however sadly, it’s time. Many will write off Loftus-Cheek’s talent and credentials after one poor performance, such is the nature of the modern game, whereas Chelsea fans know that with time and patience Ruben could easily recapture the spellbinding form he found under Sarri just two seasons ago.

Man of the Moment

The standout performer in the match however was by far and away Reece James, who rocketed a strike into the top corner as well as assisting Zouma from a corner to make it 3-1 at a crucial stage in the match. Since he burst onto the scene last season, Reece has in my eyes matured vastly as a player, and this performance perfectly encapsulated this. He looked comfortable on the ball, strong in the tackle as well as physically dominant in the air and this performance really showed how Lampard has helped take Reece’s game to the next level. Despite being linked with a move away last season, if he is able to maintain this level of performance consistently I honestly would not be surprised to see Reece James made Chelsea’s next captain in the near future as I believe he has the leadership qualities necessary to fulfil this role excellently.

The main takeaway from this game for me however was that Chelsea were able to win without playing at the top of their game. Too often last season, you felt that Chelsea would have to put in a 9/10 performance to get a result against one of the lower sides, but the fact that they ran out winners despite playing poorly for large parts is for me a huge positive. Let’s not forget Chelsea still have a large number of players to come back from injury and start in this team, Christian Pulisic, Hakim Ziyech, Ben Chilwell as well as Thiago Silva and Kovacic, all of whom will elevate this team. Chelsea’s ability to win ugly is one of the many characteristics that champions possess in the Premier League, whether that will materialise we will have to wait and see.