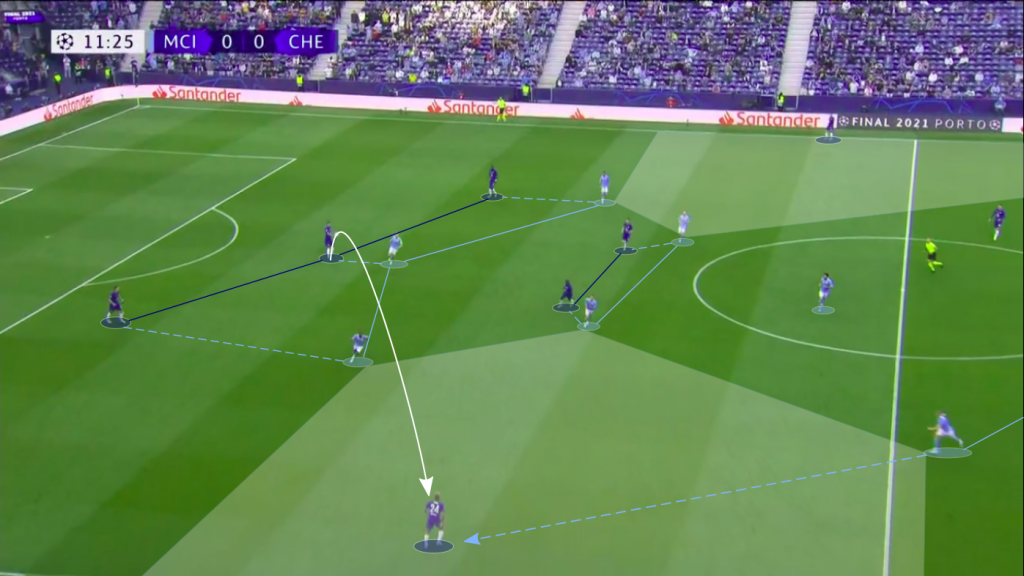 After three encounters this season in the Premier League and FA Cup, Manchester City and Chelsea squared off in the biggest match of the European club football season – the Champions League final.

Pep Guardiola’s side played Frank Lampard’s men off the park in Stamford Bridge to kick off an incredible winning streak at the very beginning of 2021, but new manager Thomas Tuchel won both in the FA Cup semi-final and reverse league fixture.

All of that would not have a big bearing on this match, as City were looking to lift the first-ever Champions League trophy while Chelsea were looking to win their second.

There were many intriguing tactical aspects to the game, right from player selection to systems and formations, and we will explore them in this analysis:

As expected, City saw more of the ball with 60% of possession, and they used it in an interesting system.

They transitioned into a 3-1-3-3 in possession, with Oleksandr Zinchenko moving into midfield on the left and Phil Foden drifting into a central position.

With İlkay Gündoğan at its base, City had a kite shape in midfield, while the wingers stayed high and wide to pin the opposition defence. 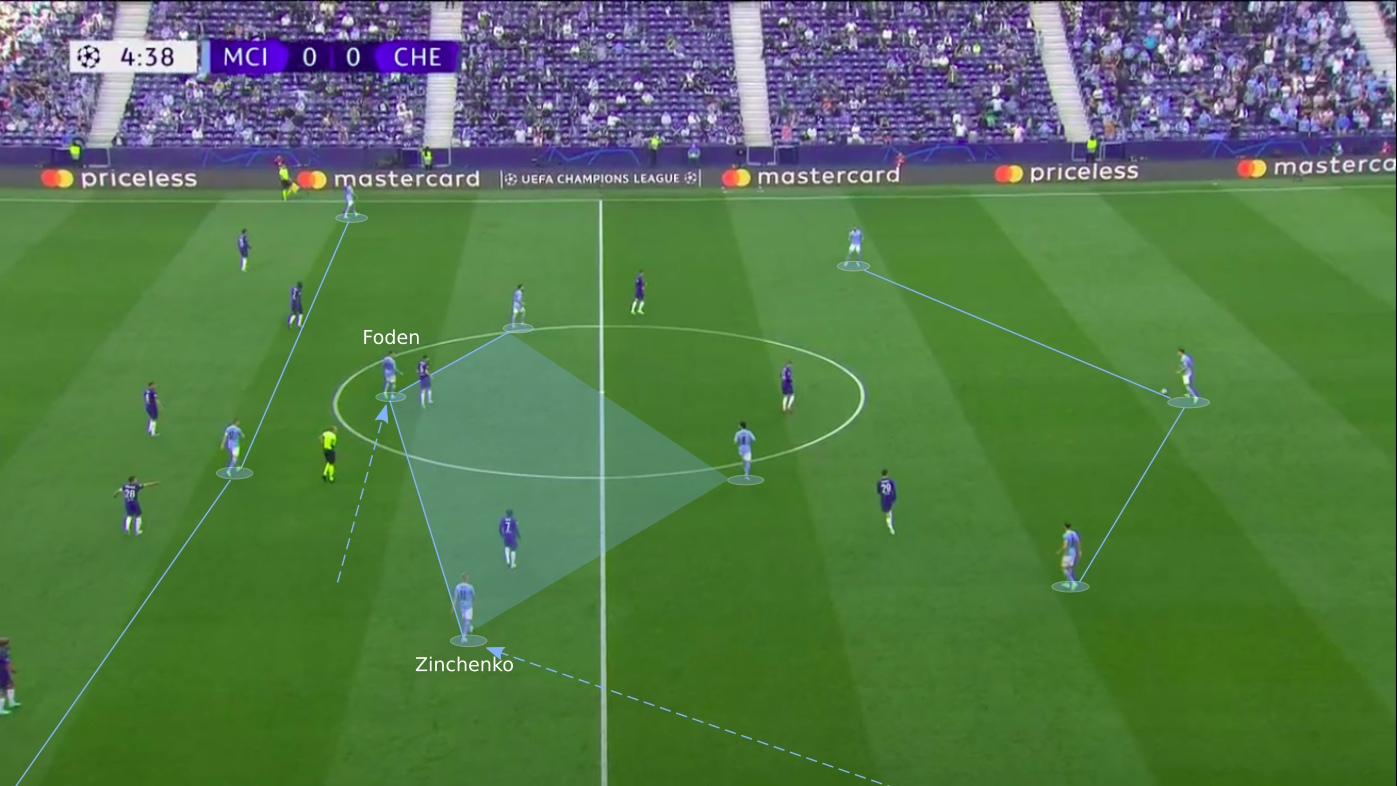 The choice of this system begs an important selection question – why did Guardiola choose to play without a striker.

With the kite in midfield, Kevin De Bruyne (the supposed false nine) had no open space to drop into, so he ended up effectively operating as a regular striker by standing on the shoulder of the last Chelsea defender, and this greatly reduced his influence on the match due to his lack of time on the ball. 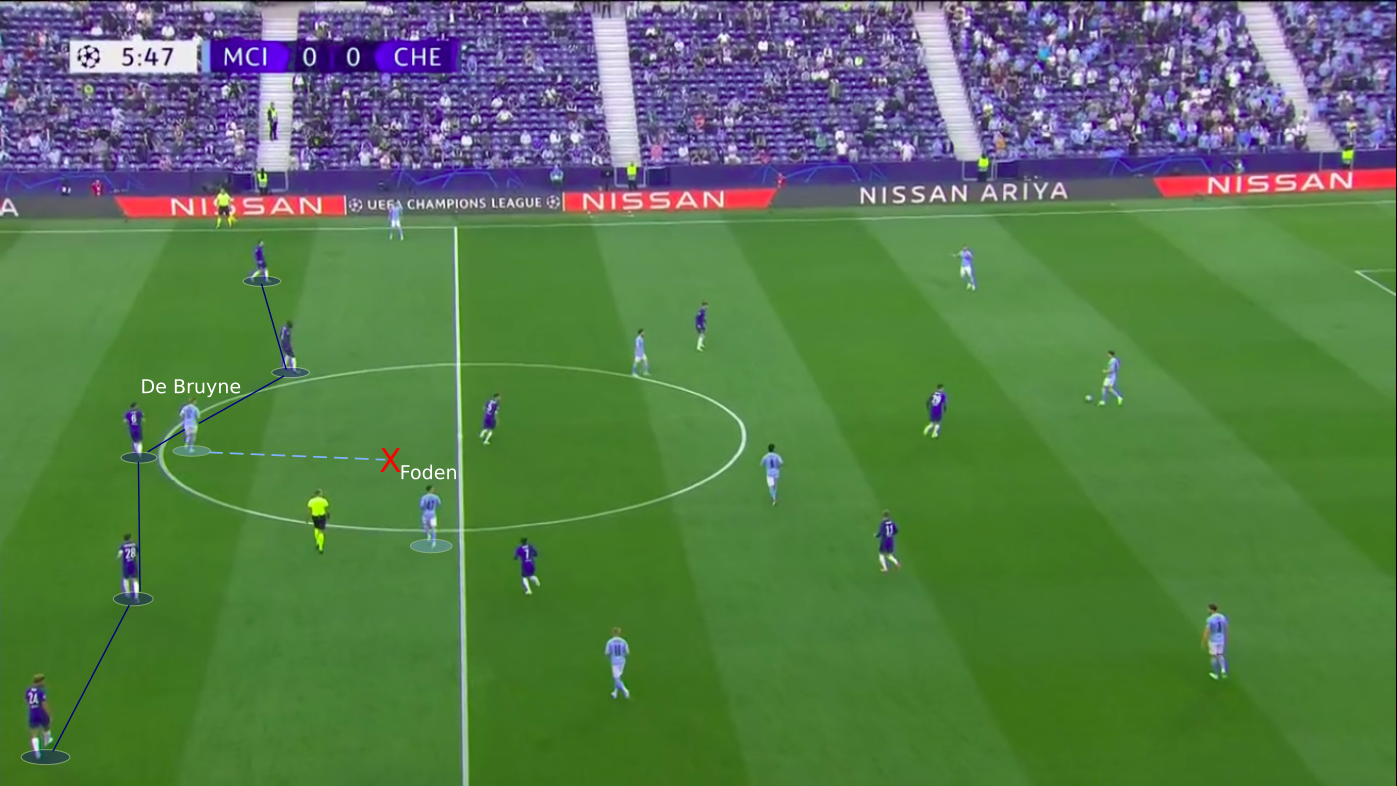 Later, De Bruyne and Foden were switched around, but in that case, the Englishman had next to no involvement in the match, so the point about a pure striker was further proven.

With just 37 touches, the Belgian international clearly did not have the impact he would have liked. The man who replaced him after his collision with Antonio Rüdiger, Gabriel Jesus, managed 22 in exactly half the amount of time.

Of course, Chelsea were defending deeper and City were attacking with greater intent as the match wore on, but a pure striker would certainly have been a better fit in this system.

Initially, Chelsea’s 5-2-3 mid-block started at the attacking edge of the midfield third, but this meant that City’s midfielders could drop into pockets of space between the lines and find open passing lanes to receive the ball. 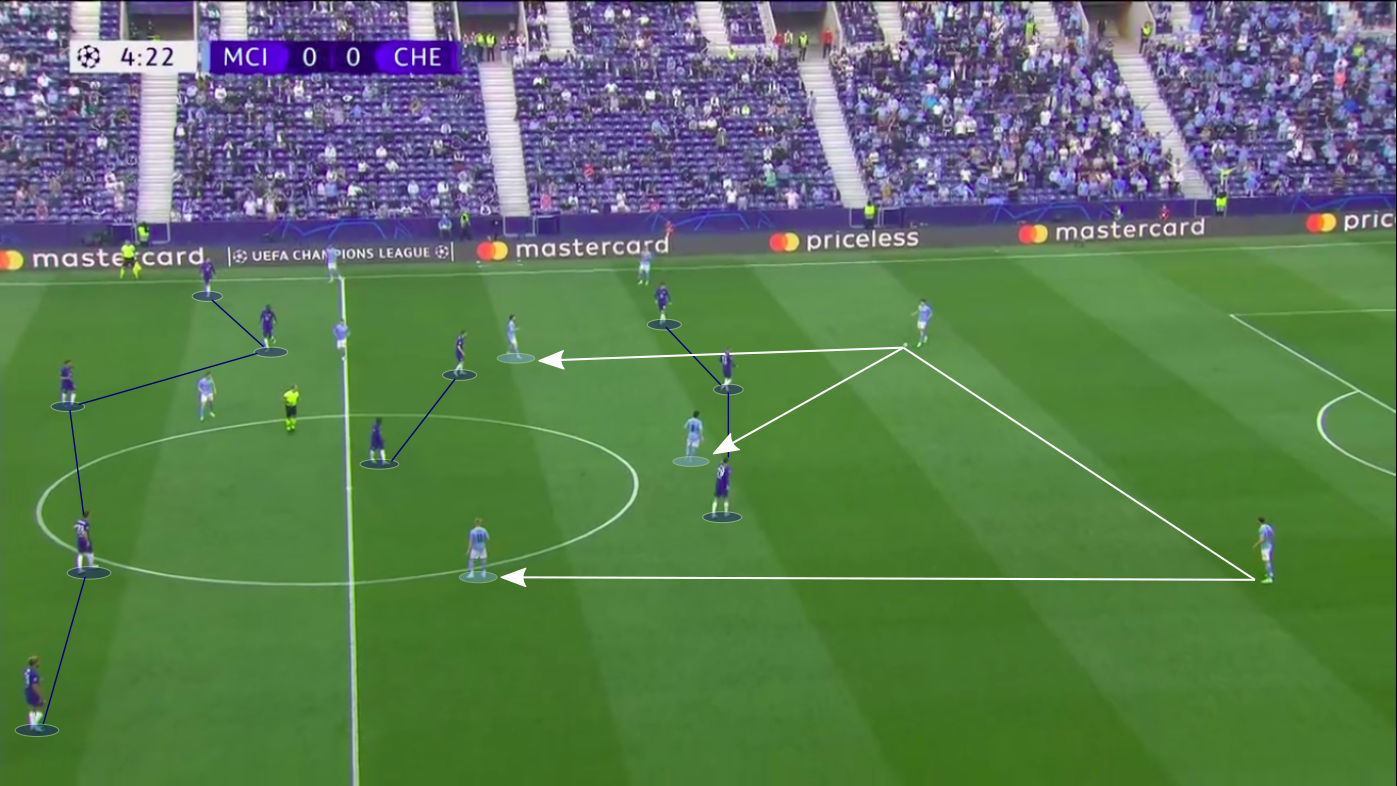 The objective of City’s structure evidently was central penetration, so Tuchel’s side combated this by dropping into their own half in a lower block, compacting themselves vertically and closing down the spaces between the lines. 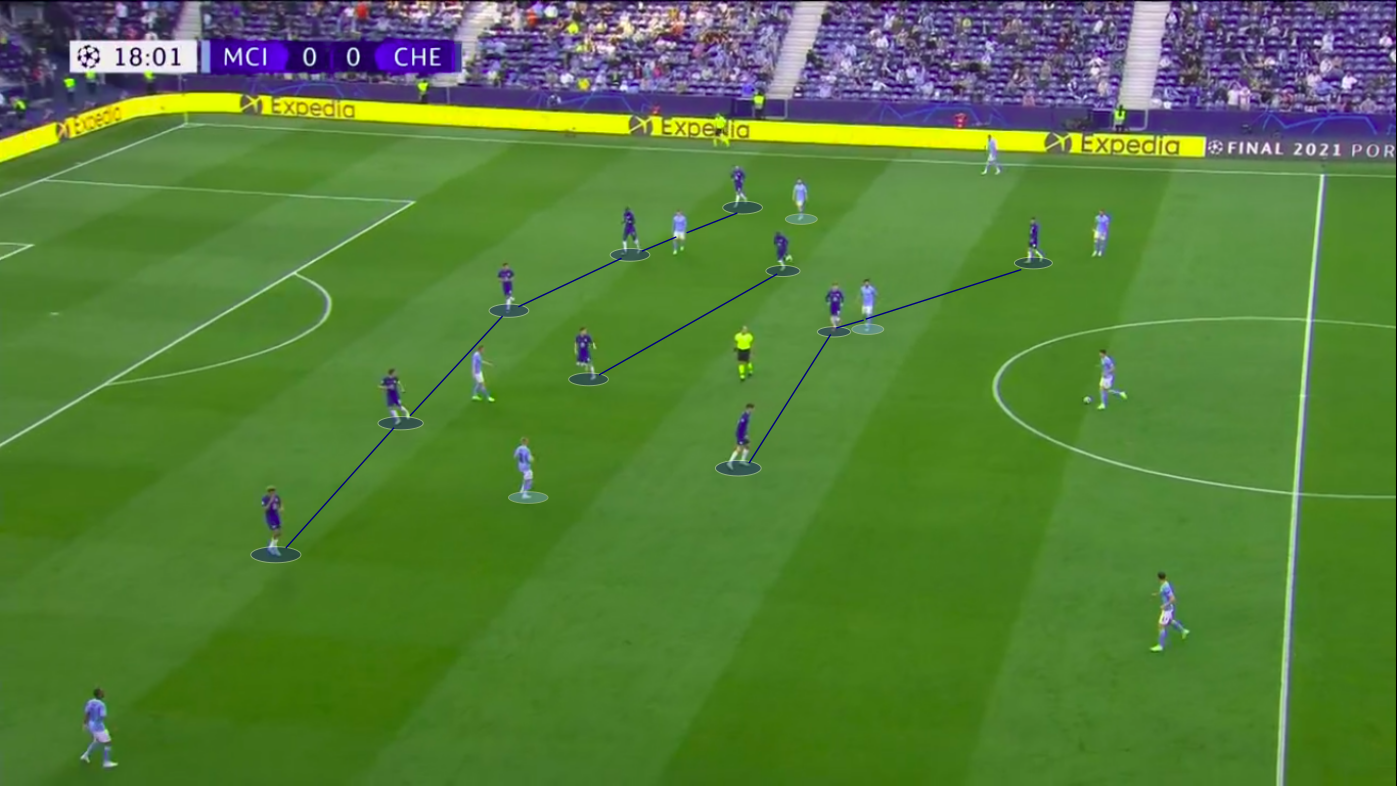 Werner was asked to sit on Gündoğan and prevent any passes into him, while Rüdiger was able to mark Bernardo Silva since he was the extra man in Chelsea’s back-three.

The Portuguese international was restricted to just 27 touches, meaning that Zinchenko was the only ball-progression option left, and his match-high 109 touches prove that he fulfilled that role.

However, he failed to create a single chance in the match, while the man who was further ahead of him on the left, Raheem Sterling, was truly pocketed by Reece James, who made seven successful tackles.

Chelsea were largely able to restrict any passes into the central region, but whenever City attempted them, they received the N’Golo Kanté treatment as the French midfielder put in a shift of shifts to shut his opponents down.

Unlike the sliders of Instagram, City had no DM in the Champions League final.

It doesn’t take a genius to figure this out, but the main consequence was that they were quite easily caught out in transition, with acres of space in midfield. To illustrate that, let’s play a game of ‘Spot the Defensive Midfielder’: 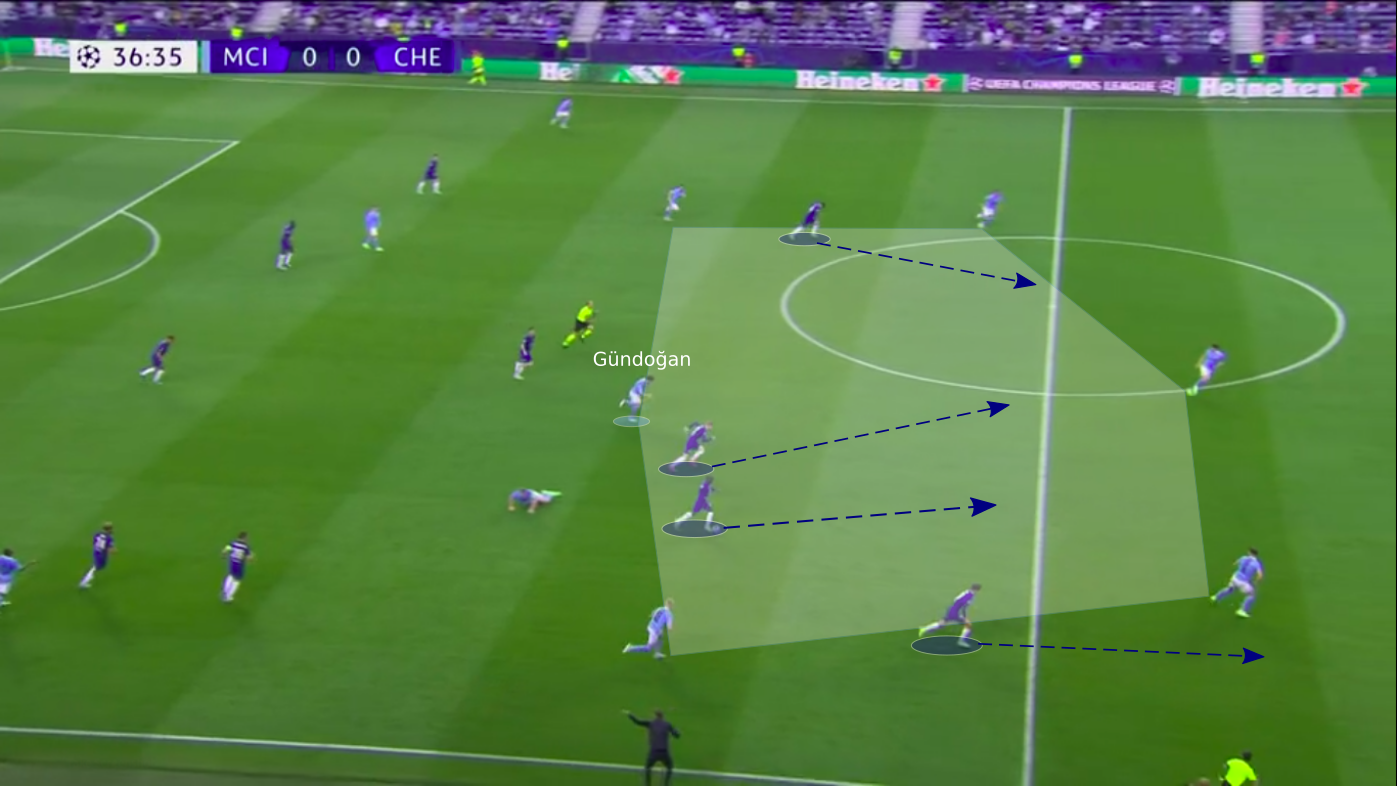 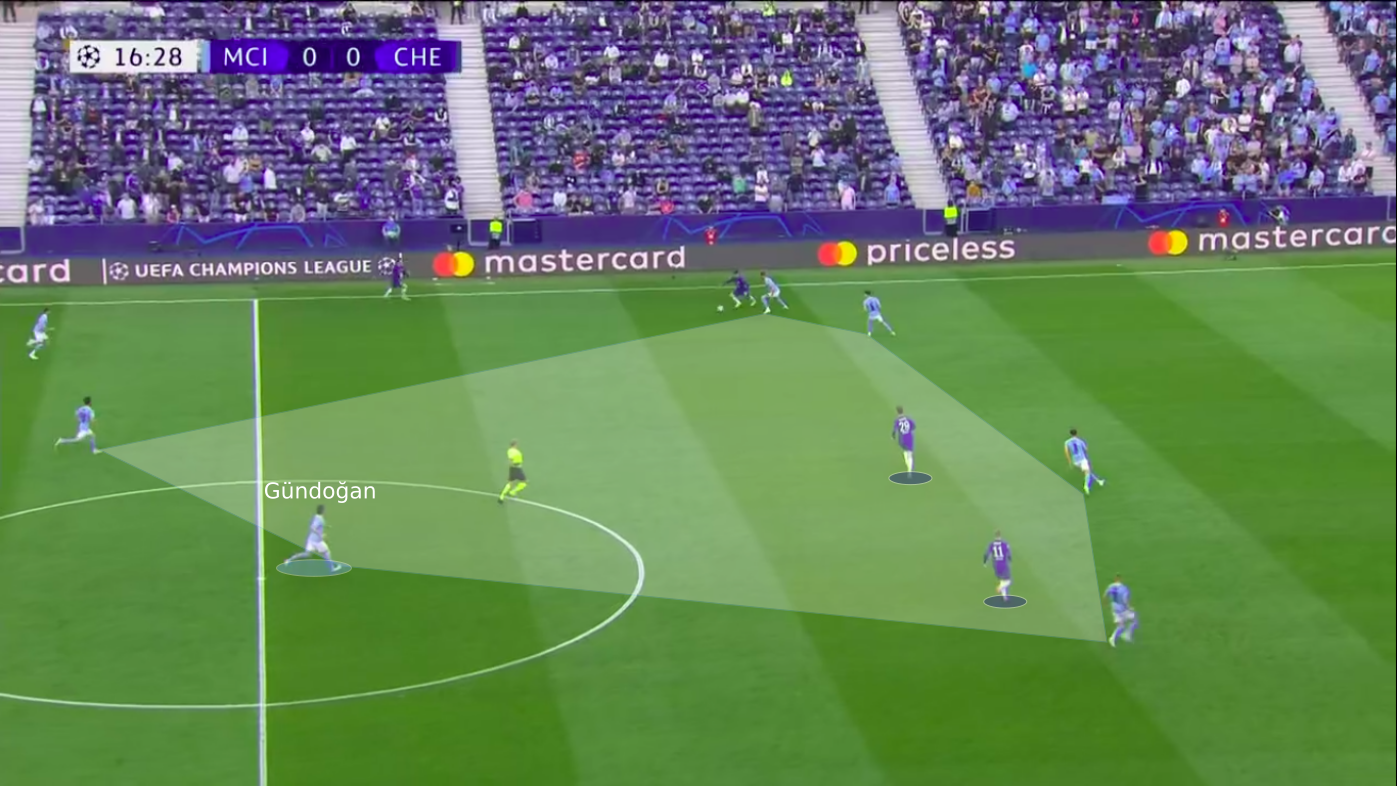 Gündoğan was unsurprisingly imperfect with his defensive positioning, and that allowed Chelsea to profit on the break on several occasions.

In open play, City often had huge gaps in midfield with their German midfielder getting dragged out of position. 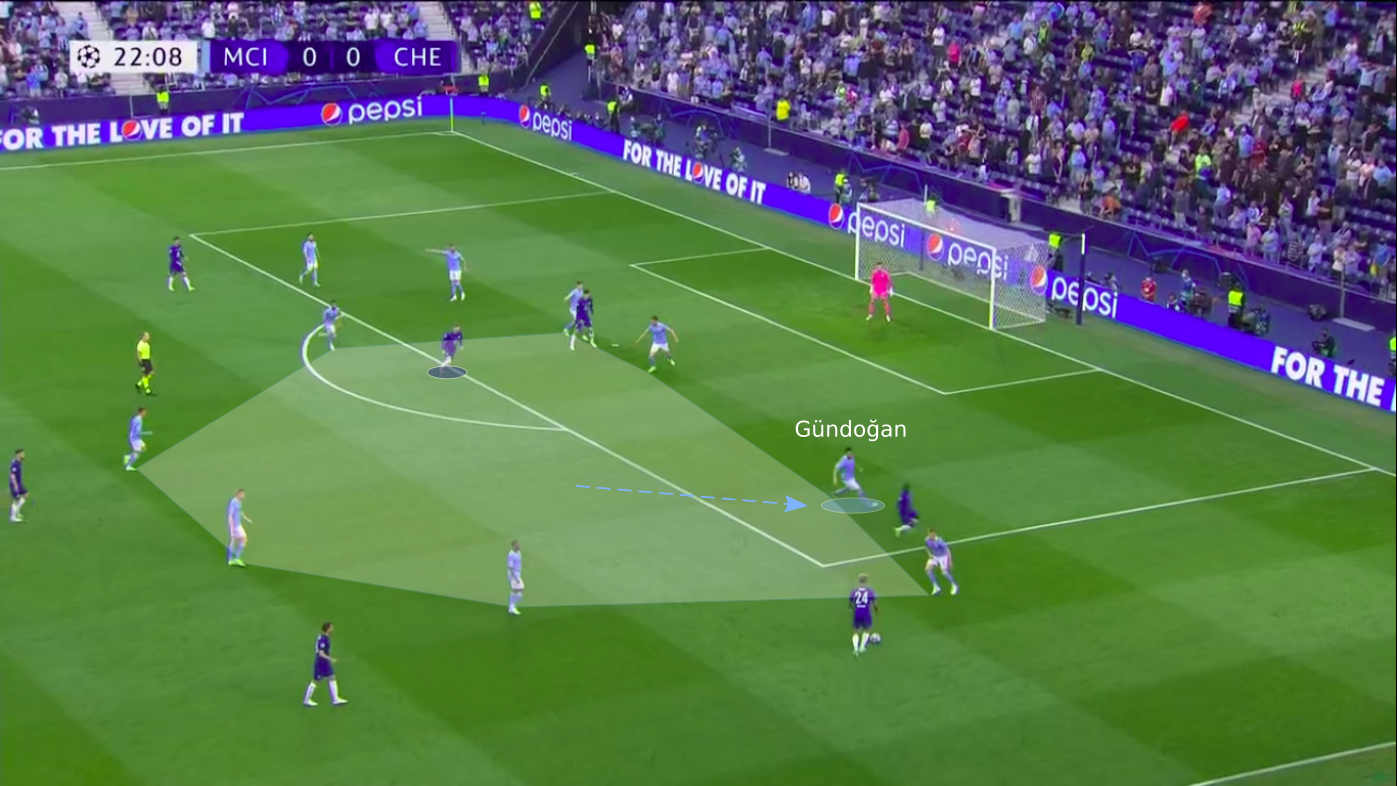 Guardiola’s decision to bring Fernandinho on for Silva (who struggled to have an impact in possession as previously discussed) was a clear concession of his mistake, as he sent a defensive midfield on even when his team was chasing the game.

City’s defensive issues with the Guardiola big-game special lack of defensive midfielder were aggravated by an imperfect pressing structure.

The main weakness was out wide against Chelsea’s wing-backs, as their front-three stayed narrow out of possession to press the three Chelsea centre-backs in a narrow 4-1-2-3 to directly combat the 3-2 build-up shape.

This meant that City’s full-backs would have to push up to deal with the opposition wing-backs. 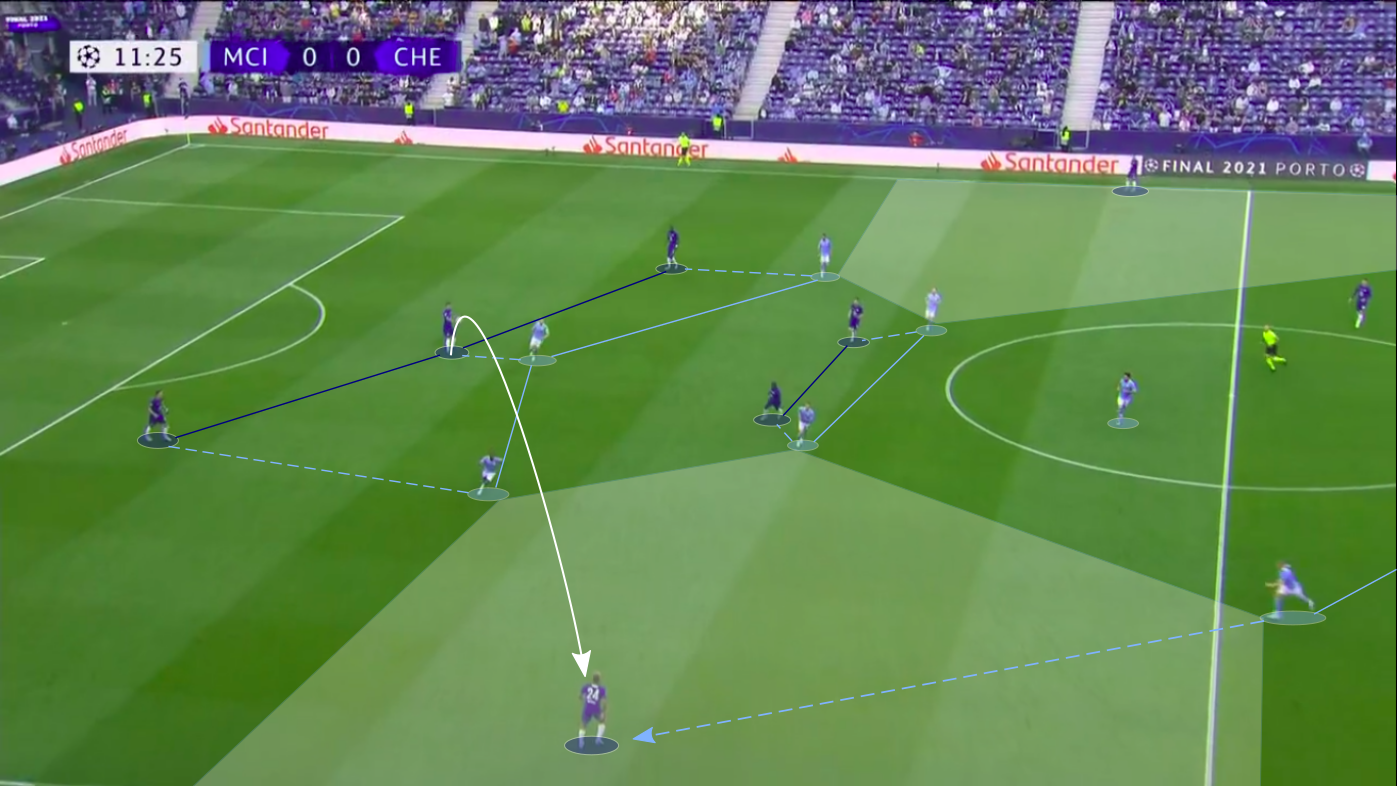 This, in turn, freed up the Chelsea attackers, who could then isolate the two centre-backs and cause problems. 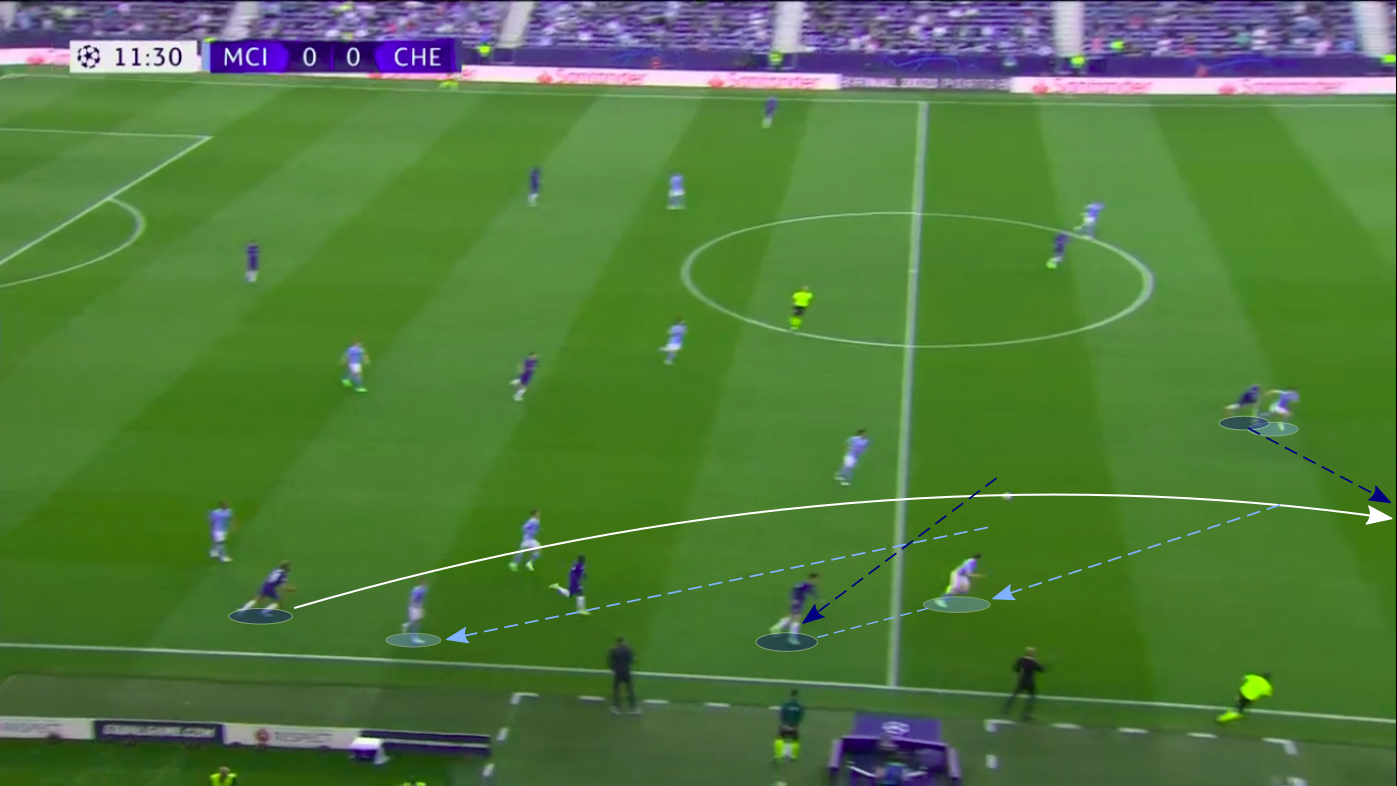 The Pensioners scored as a result of this: 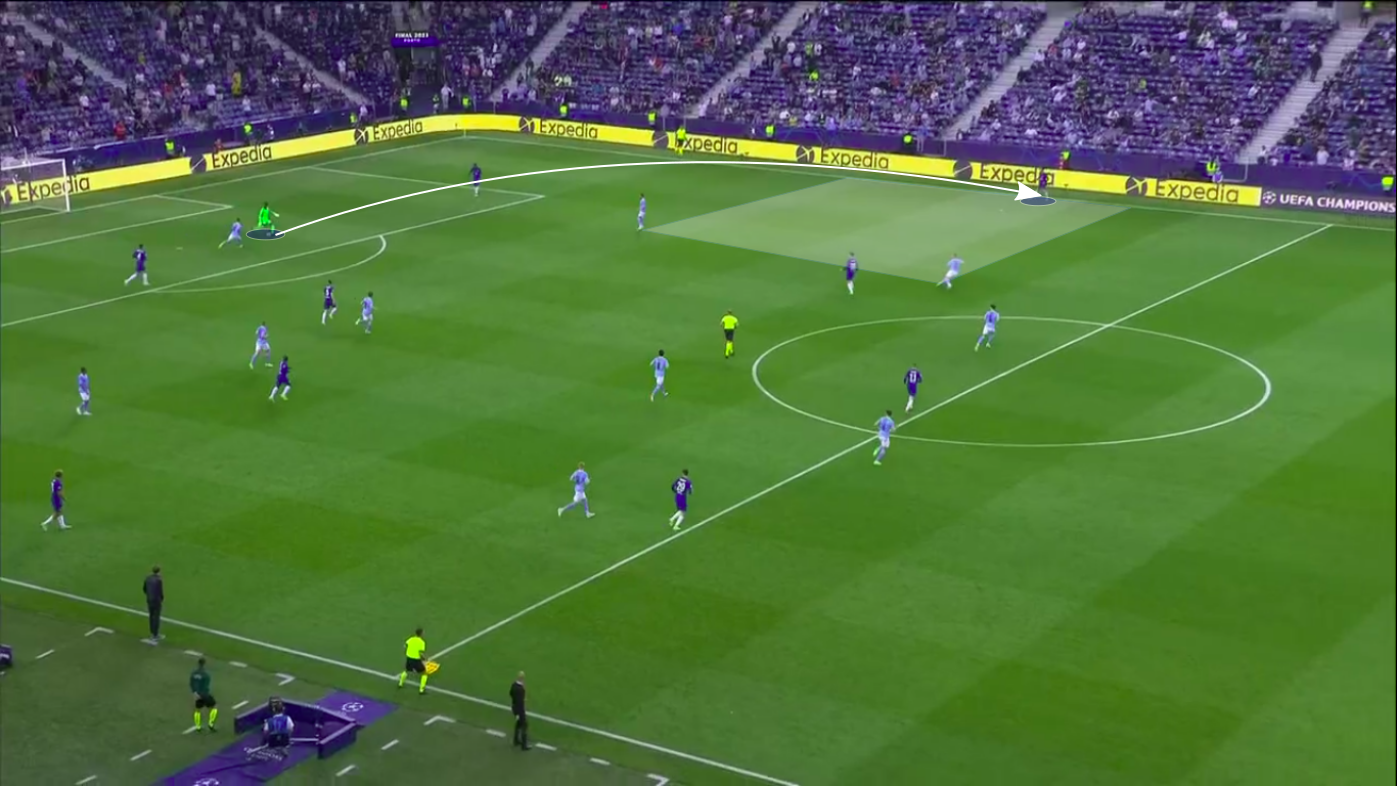 Edouard Mendy pinged a ball across to Ben Chilwell, forcing Kyle Walker to close him down. This meant that Mason Mount was left free, so the wing-back cushioned it down for him. 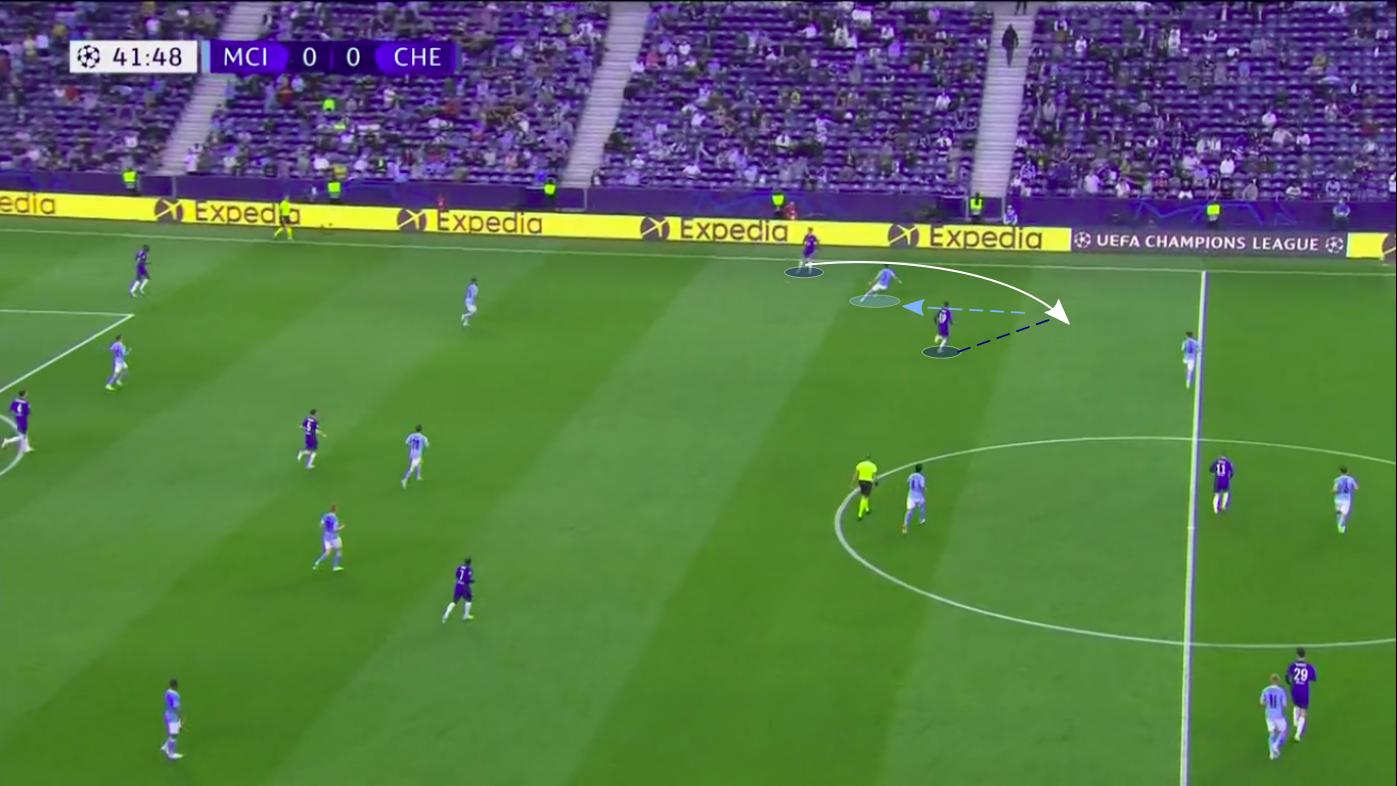 With John Stones caught in no man’s land, City’s defenders were left isolated. This is where a certain German forward made a key impact on the match.

Chelsea’s striker may have missed a couple of decent chances in this match (and throughout the season), but his influence on the match was unmatched in ways that the untrained eyes might not have noticed.

After Mount received the ball in the build-up to Chelsea’s goal, Werner was left isolated with Rúben Dias while Kai Havertz had Zinchenko for company.

The ex-RB Leipzig man pulled his marker away to the left with a decoy run, allowing his teammate to burst down the middle and beat Ederson in a one-on-one. 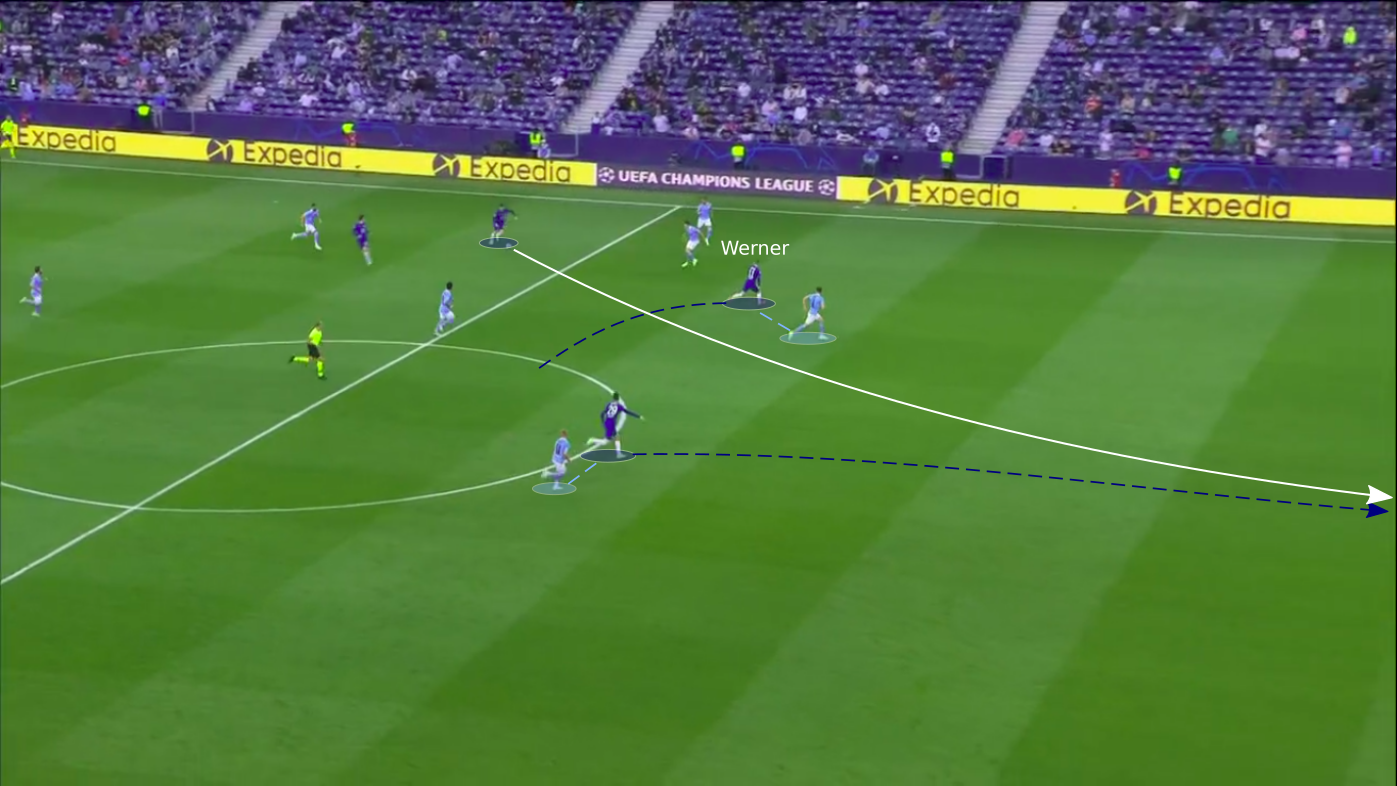 The German international also proved a useful outlet for the Chelsea defence when they were under pressure, as he happily chased down long balls played down the channels. 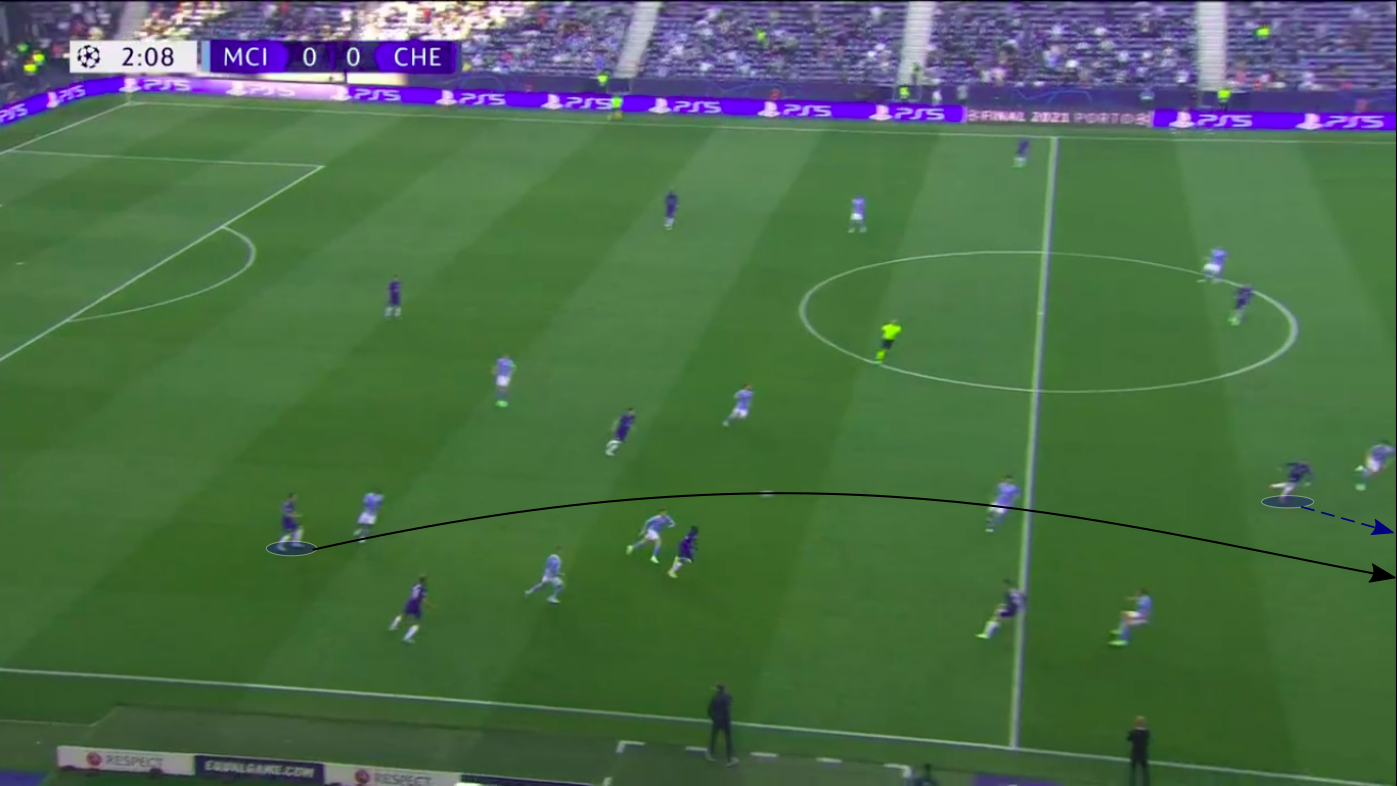 Even in open play with Chelsea attacking, Werner’s runs down the channel proved useful. 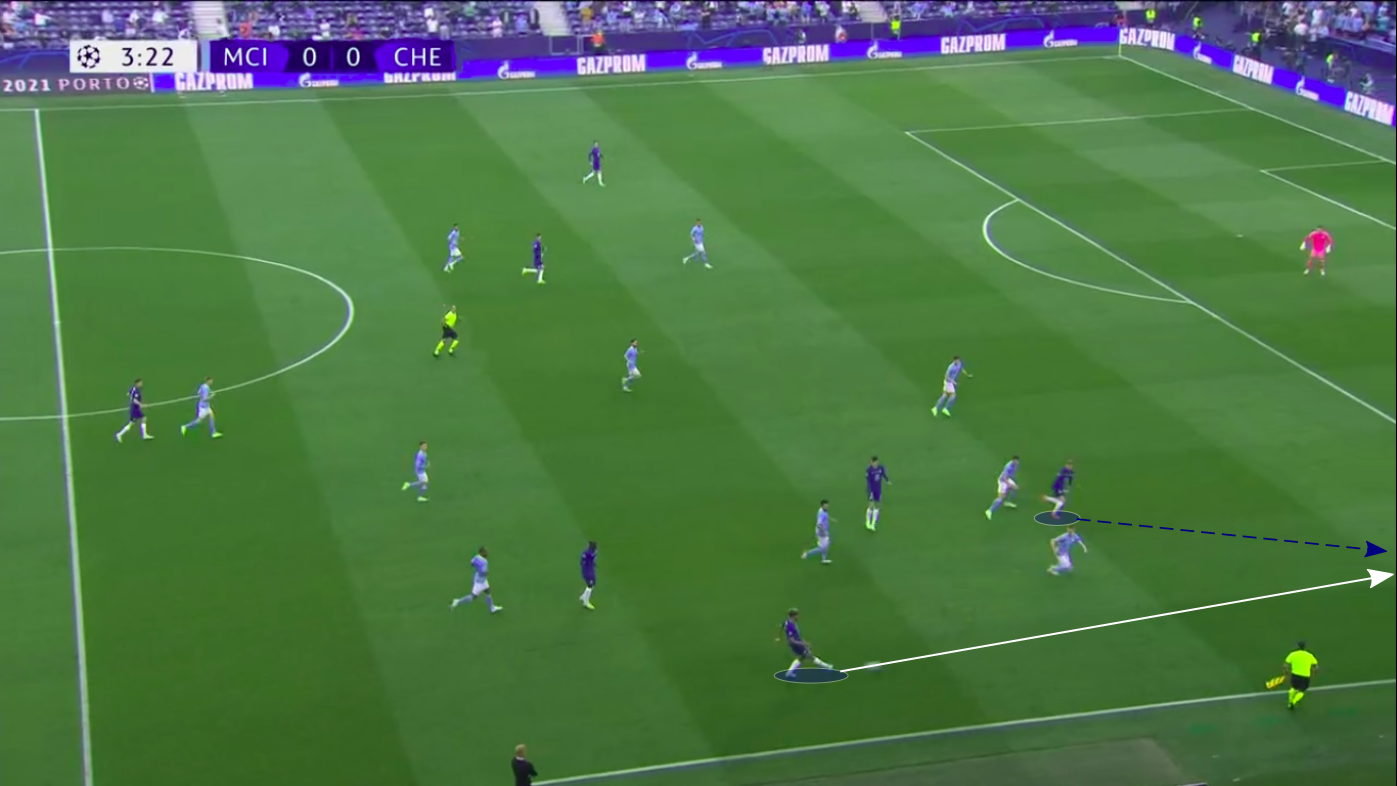 But despite that, such is his impact in helping his fellow attackers (Mount and Havertz in this case) excel, that Tuchel knows he must persist with him even at the cost of one goal per game.

Before we speak about City, it is important to give Chelsea a lot of credit for sticking to a proven game plan, adapting quickly and intelligently to what their opponents did and stepping up for such a big game.

There were great performances all over the pitch, but the two clear standouts were James and Kanté, who were other-worldly.

With that being said, this match was certainly a case of City undoing their own chances. Had they used their tried and tested system, there is nothing to suggest that they would have failed to carve Chelsea open.

However, Guardiola could not resist the temptation of tinkering in a massive game despite doing so in the quarter-final and semi-final, and the implementation of a novel tactical plan might have had an impact on the performance of the players.

Going into this match, most experts predicted that City would have to shoot themselves in the foot to allow Chelsea to have a chance of beating them, and boy did they do that in some style.

Once again, the London club unquestionably deserves the plaudits for capitalising on their opponents’ mistakes, which is why this was a deserved victory for them.