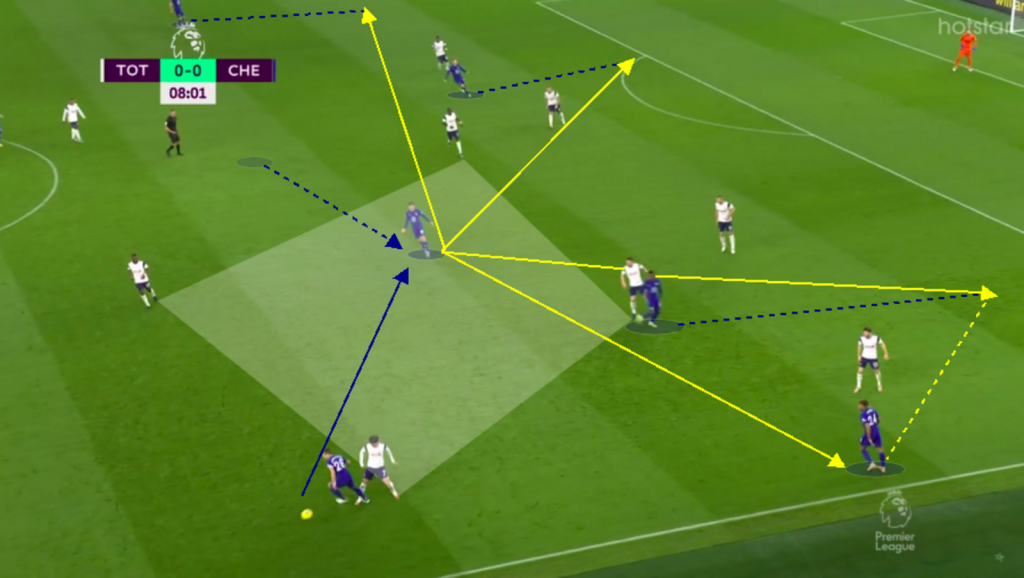 Tottenham Hotspur’s Failing to cope without Kane series‘ sequel was released when they faced Thomas Tuchel’s new-look Chelsea, and critics have given some splendid reviews.

In our review, we will take a look at the tactical side of things and how José Mourinho’s newest Kane-less system failed. 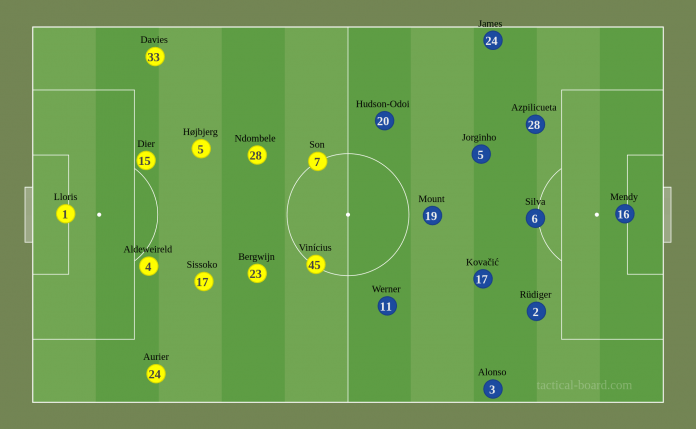 As we predicted in our last Chelsea analysis, Tuchel deployed his men in a 3-4-1-2 as he had done in the second half against Burnley. Eduoard Mendy kept his place in goal, and once again, a defence of César Azpilicueta, Thiago Silva and Antonio Rüdiger protected him.

Reece James started at right wing-back for the first time under Tuchel, while Marcos Alonso kept his place on the left and as did the midfield of Jorginho and Mateo Kovačić. Mason Mount started in the number 10 position, with Callum Hudson-Odoi and Timo Werner in front of him.

First of all, let’s take a look at how Chelsea pressed and defended. 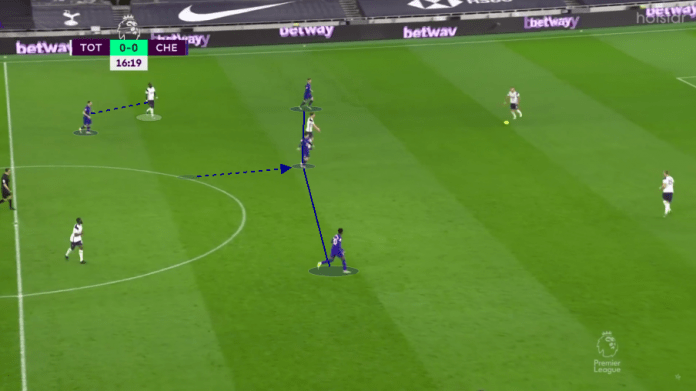 Mount pushed up alongside the two frontmen to create a first pressing line of three. This would equal Tottenham’s three-man build-up with the two centre-backs and Højbjerg numerically. Behind this line, Kovačić made sure that Sissoko did not have too much space to himself. 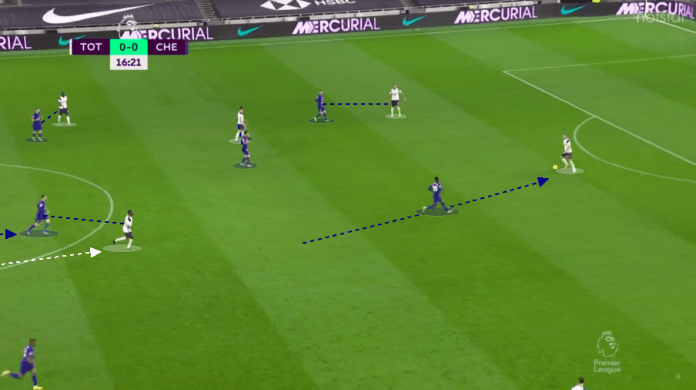 The pressing trigger for Chelsea was Dier receiving the ball. Hudson-Odoi would quickly close him down in such cases, while Werner would mark and Azpilicueta and Mount would take Højbjerg. If Ndombele tried to come deep, Jorginho closely followed him, effectively forcing Spurs to go long. 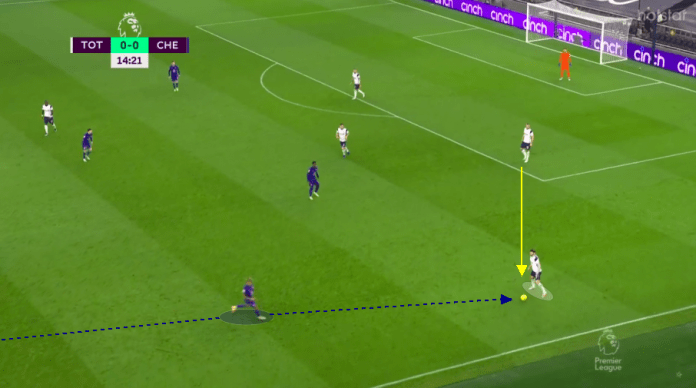 If the ball was played out wide to a full-back by Tottenham (and this was usually Davies, who managed 50% more touches than Aurier), then the Chelsea wing-back from that side would push forward to close him down. 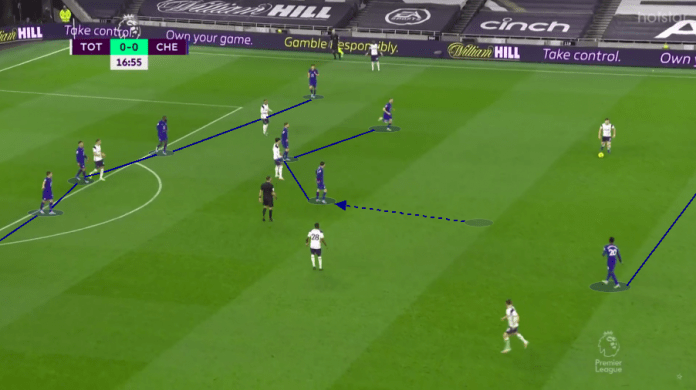 In defence, Chelsea shifted to a 5-3-2 as Mount dropped into midfield, with the wing-backs falling in line with the three centre-backs.

Now, let’s see how the Blues worked in possession.

In his third match in charge of Chelsea, Tuchel stayed true to his back-three system overall, but once again made a few tweaks from the last match to suit Tottenham. 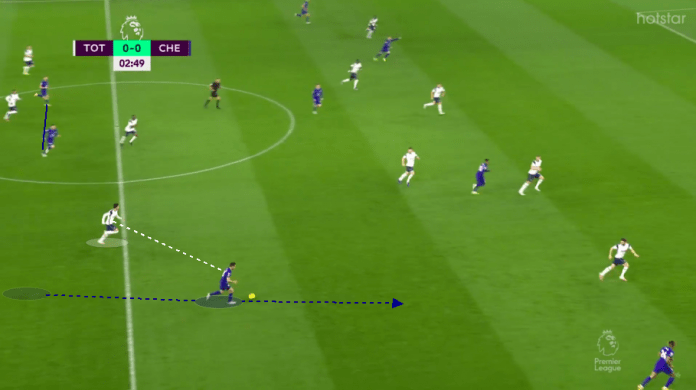 As he often did against Wolverhampton Wanderers, Azpilicueta was given a license to move forward freely, since Son’s defensive capabilities are not the best in the world. In this instance, you can see that the Chelsea defender has advanced further than his midfielders, and the other two centre-backs are not even in frame. In doing so, he could also pull the South Korean international away from his attack, reducing his counterattacking threat. 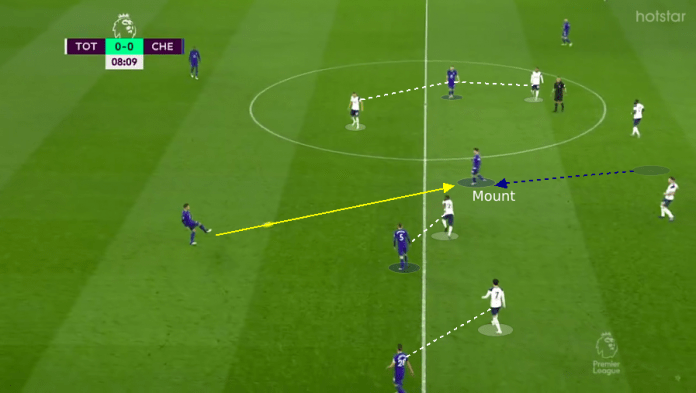 In cases where the pass to Azpilicueta was not on, Mount came deep from attacking midfield to provide an additional passing option centrally and help progress the ball forward. 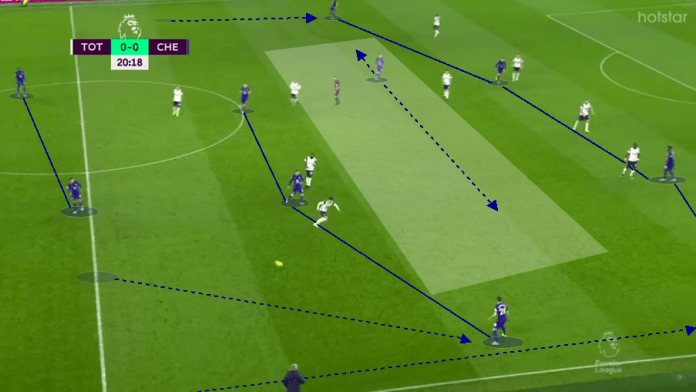 So, in possession, Chelsea had a sort of a 2-3-1-4 as Azpilicueta pushed forward. Mount had full positional freedom horizontally as he drifted to either side to search for pockets of space, while Alonso did not get as far forward as James. 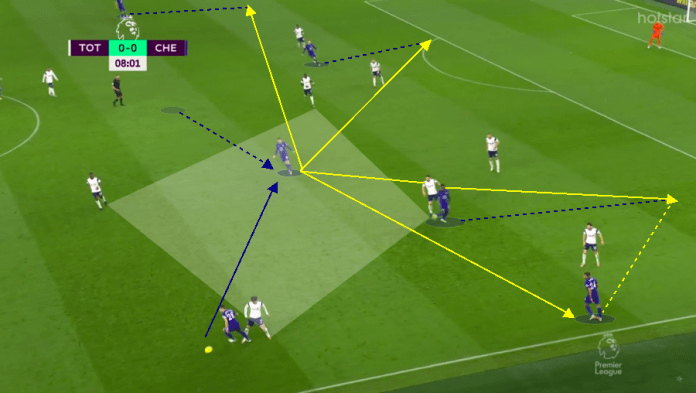 As discussed above, Mount stayed behind the attacking line as he looked to find and drift into pockets of space between Tottenham’s lines. From such positions, he could pull the strings of his side’s attacks with many passing options available to him. 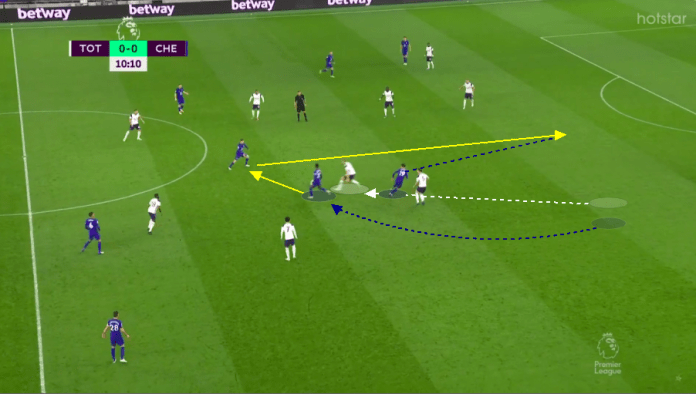 Hudson-Odoi did not operate as a striker – he often dropped deep and drifted out wide (as we will see later). In moving away from goal, he usually dragged a Tottenham defender with him, vacating space for Mount to run into.

With all of this taken into consideration, you can understand why 50% of Chelsea’s attacks came from the right. Here is an example of a typical move on the right flank. 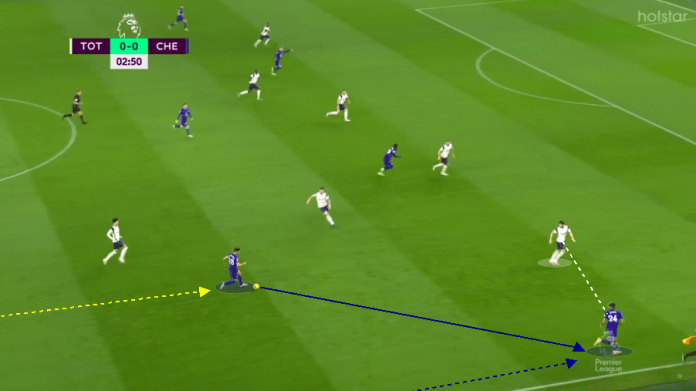 Azpilicueta’s forward runs were quite important for James because he did not have to carry the ball forward and was free to push forward and hold width on the right. 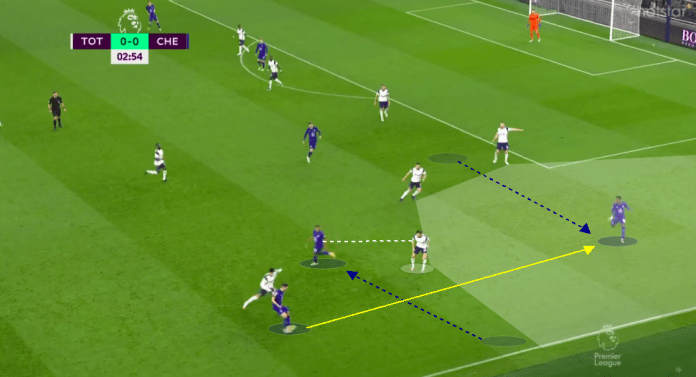 James’ forward position would occupy the Tottenham left-back, Davies, so Hudson-Odoi could access the space behind him by drifting wide. 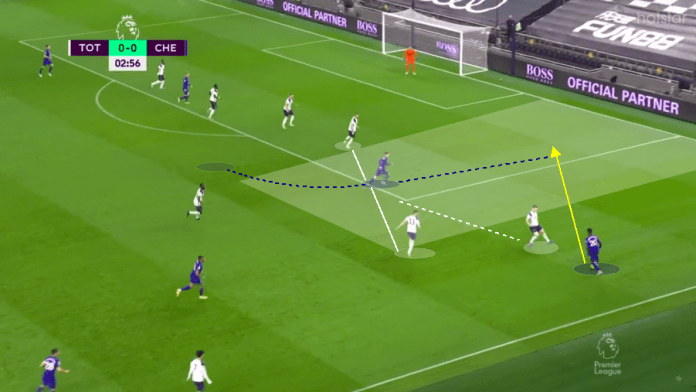 This, in turn, would force another Spurs man to go out and meet him, vacating space for Mount to access and get into a crossing position. 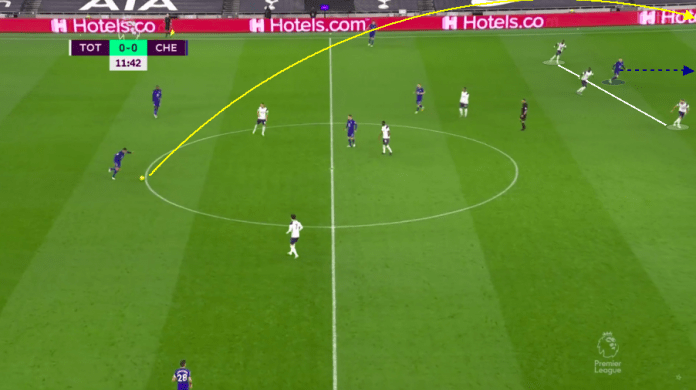 In the rare cases that Chelsea advanced through the left, they did so through Werner, using long balls. The German striker made runs down the channel, targeting Aurier’s defensive weaknesses and using his pace against the full-back. However, they did not try this too often, usually opting to get up the right flank. 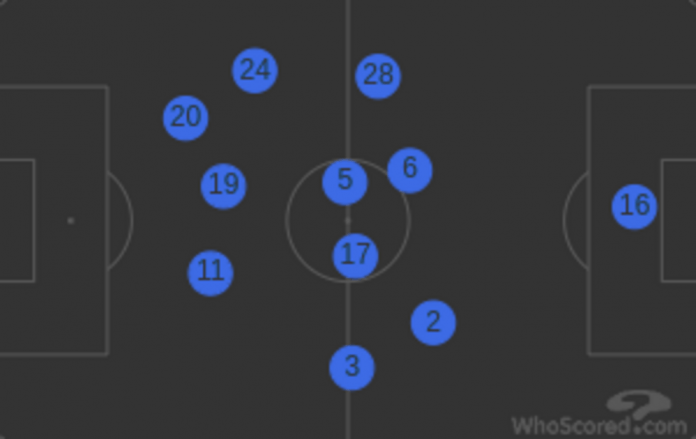 Once again, let’s enlist the help of the average positions map to summarise Chelsea’s possession-play. Azpilicueta (28) is further than the other two centre-backs (6 & 2), while James (24) is way ahead on the right in contrast to his counterpart on the left (3). Hudson-Odoi (20) is more off-centre than Werner (11), while Mount (19) is also a little right-biased.

Now, let’s see how Tottenham tried to combat this.

Tottenham were set up to defended deep and hit Chelsea on the counter-attack, and this was very evident from the start of the match. 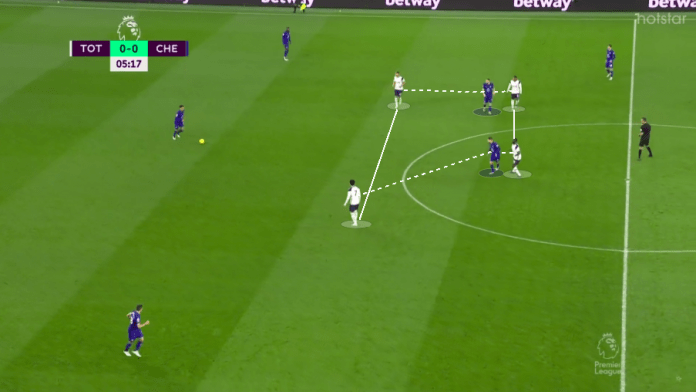 In the first half, Tottenham made absolutely no attempts to press, but their narrow 4-2-2-2 did mean that they looked to contest the middle of the par, with their forward and attacking midfielders looking to prevent either of the Chelsea holding midfielders to get on the ball. This explains why Azpilicueta was used most often in the Blues’ build-ups, with his 85 touches in the defensive and midfield thirds outranking everyone else on the pitch. 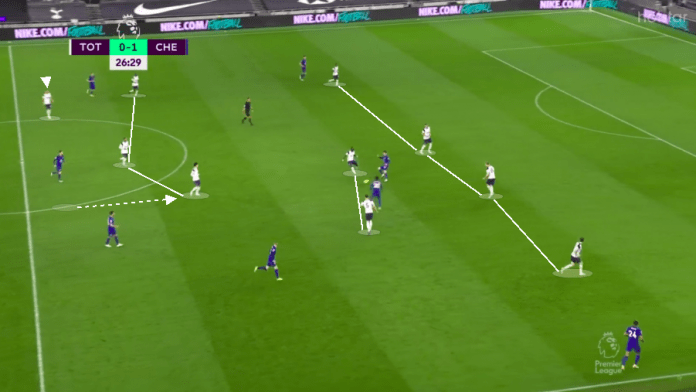 In defence (which was very often, mind you), Tottenham dropped into a 4-2-3-1, as Son moved to the left of the first line of midfield, Vinícius alone up front. 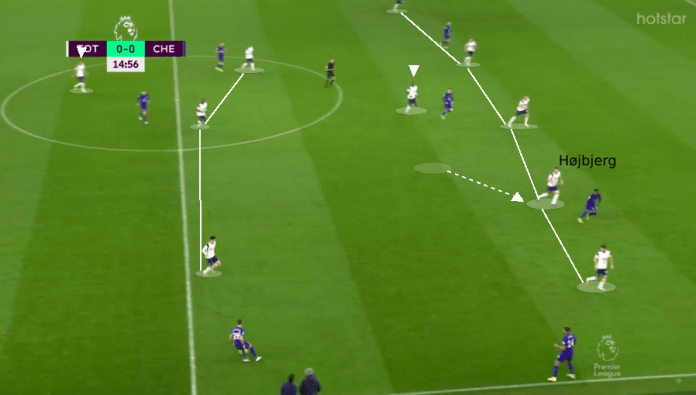 But, more often than not, Tottenham defended in a 5-1-3-1, as Højbjerg was asked to man-mark Hudson-Odoi and prevent him from wreaking havoc with his movements. 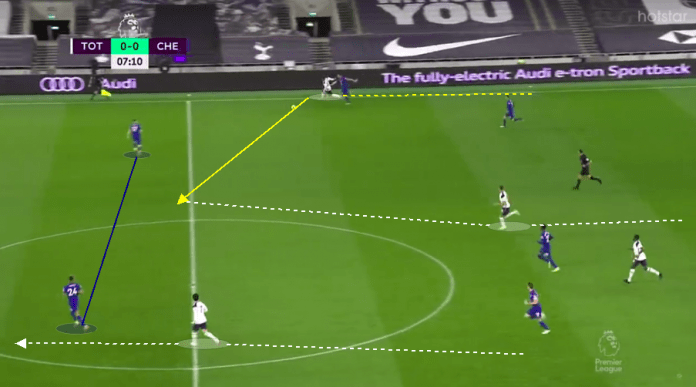 As aforementioned, counterattacks were Tottenham’s main attacking weapon in the first half. Often, they broke from set-pieces, as is the case in this situation. Bergwijn is carrying the ball on the right, with Son on the left and Vinícius is progressing centrally to create a potential 3v2 situation. 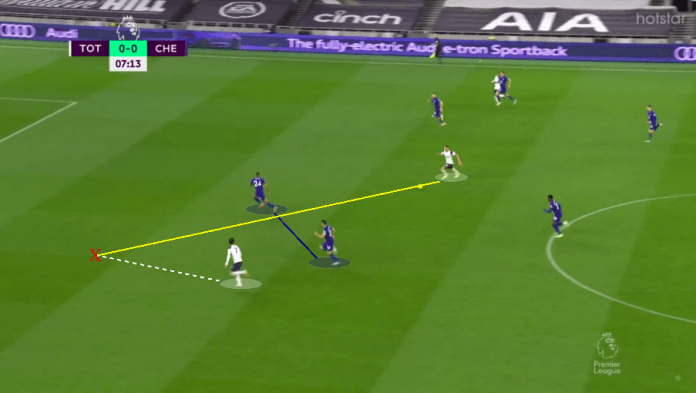 Sadly, Vinícius is no Harry Kane, so he failed to find Son on the left and ended up losing the ball. You can’t blame Mourinho for this – his set up gave Spurs the best chance to break, but his players’ mistakes cost him.

In either case, Mourinho’s first-half tactics failed to yield any rewards once again.

With another flopped first half, Tottenham made changes, though not in the number of defenders, at half-time. 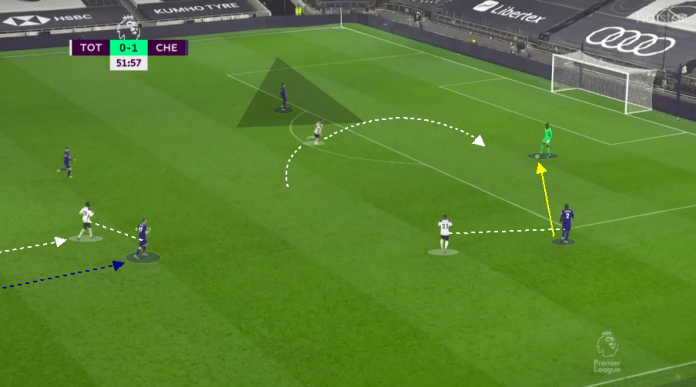 Spurs came out and started pressing very high up the pitch immediately, not allowing Chelsea to have any time on the ball at the back. Usually, a backpass to Mendy was the trigger. Vinícius angled his run in a way to keep the man in the middle of the back-three (Andreas Christensen) in his cover-shadow, while Bergwijn marked Rüdiger. Ndombele looked to ensure that he was following one of the two midfielders very closely, so as to prevent them from receiving a pass. 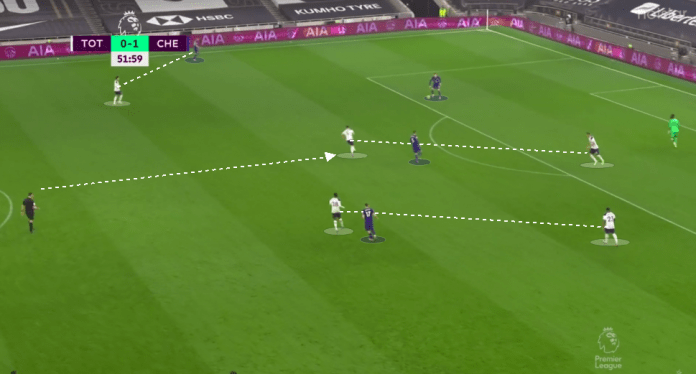 Meanwhile, Son kept an eye on Azpilicueta, while Højbjerg pushed up to similarly prevent the other Chelsea midfielder from receiving the ball and turning. Just as they did in the first half, Tottenham ensured that Chelsea could not play through central midfield by keeping two midfielders and as many forwards in position to close the area down if the ball went there. 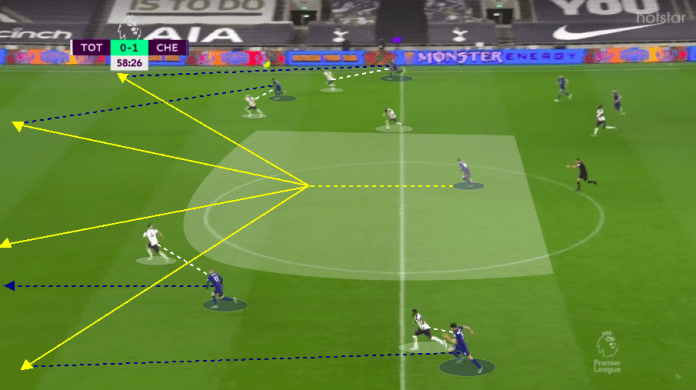 However, this was a risky operation, because if Chelsea broke through this press, they would have a very favourable situation in transition, as is the case above. Tottenham were very exposed in midfield, and with their lack of pace at the back, Chelsea’s forwards should have found themselves in some great situations. Therefore, Tottenham were lucky to not concede from such situations. 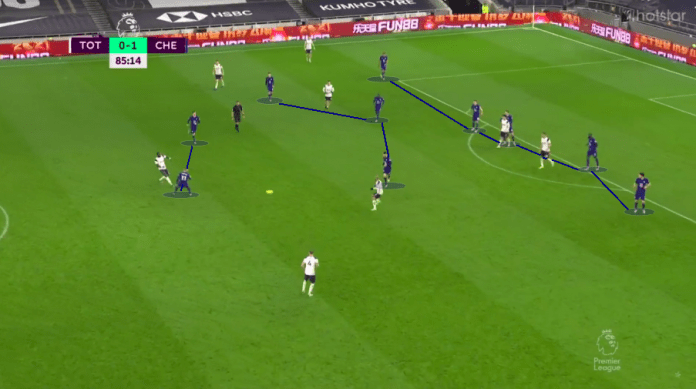 Despite making a couple of changes which saw Lucas Moura and Erik Lamela come on, Tottenham simply could not break Chelsea’s defence (which was retreated further and further as time wore on) in the second half, mainly due to their lack of a plan in possession due to their initial counterattacking set-up.

This match has only exaggerated the trajectory these two local rivals were going on – Tuhcel and Chelsea continue to power their way back up the table with another strong result and a third successive clean sheet in their first three matches together – a feat last achieved by a Chelsea manager in 2004, who just happened to be Mourinho. The only negative for them will be Thiago Silva’s injury, but he should not be out for too long.

By contrast, the Portuguese tactician has lost two consecutive home league matches for the first time in his long career, and these damning stats coupled with his unattractive style of play have obviously made him lose a lot of adulation from the fans.