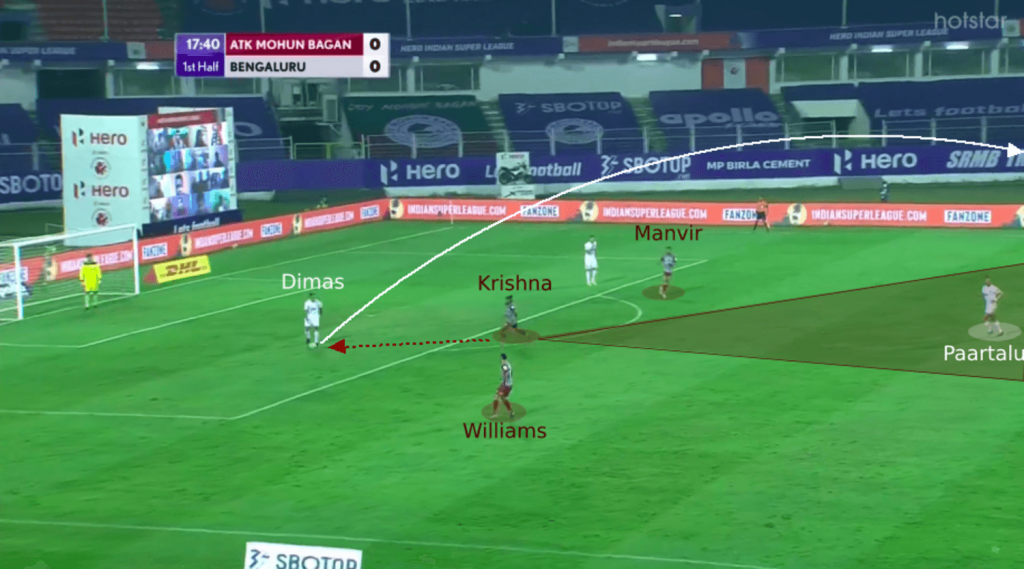 ATK Mohun Bagan now have two wins in their last two games, and in both cases, it was some masterful tactics from manager Antonio López Habas that delivered the three points. Last time against FC Goa, he deployed a 4-1-4-1, but this time, he made a few changes. We’ll take a look at them in this analysis:

ATK Mohun Bagan made just one change in their lineup. Arindam Bhattacharya and his defence – Pritam Kotal, Sandesh Jhingan, Tiri and Subhasish Bose – kept their places in the squad. The change was in midfield, where Pronay Halder and Carl McHugh were partnered by Edu García instead of Jayesh Rane. A minor tweak up front saw Manvir Singh and David Williams switch wings, while Roy Krishna led the line. Bengaluru FC were forced into one change at least, but they made a couple more. Gurpreet Singh Sandhu stood in between the sticks once again, as did defenders Harmanjot Khabra, Pratik Chaudhari and Juanan, but Rahul Bheke was a newcomer as he replaced the injured Ashique Kuruniyan. The midfield pivot was comprised of Dimas Delgado and Erik Paartalu, with Cleiton Silva operating in an unfamiliar number 10 role. Udanta Singh was handed a start on the flank alongside Sunil Chhetri, and a change of striker saw Deshorn Brown come in.

As discussed above, ATK Mohun Bagan slightly changed their formation from a 4-1-4-1 to a 4-3-3. The key difference was the fact that the wingers pushed up to join the press too, unlike last time. Above is an example of ATK Mohun Bagan’s shape out of possession against FC Goa. You can see that the wingers are staying in the midfield line, leaving Roy Krishna alone up front. This time, though, things were a bit different, as the wingers joined Krishna in pressing high up the pitch. By pressing in this manner, ATK Mohun Bagan forced Bengaluru FC to go long very often, meaning that their midfield – and Dimas Delgado in particular – couldn’t dictate proceedings. As you can see above, Roy Krishna is pressing the deep-lying Dimas in such a way that his fellow midfielder, Erik Paartalu, is caught in his covershadow, forcing the Spaniard to go long aimlessly. In this manner, ATKMB made sure that Bengaluru FC didn’t have too much time on the ball in their own half. However, what was surprising was the fact that they didn’t mind keeping a good portion of the ball to themselves, particularly in the first half, when they saw 45% of the ball, significantly up from their season possession average of 41.6% in the first period. Most of this possession was spent passing around the back, but as ever, long balls were the Mariners’ main weapon. With their press forcing Bengaluru to go long, they focused on winning those headers, and then quickly springing forward with such passes. This is exactly how their goal came about. It all started when Pronay Halder won a header on the halfway line, bringing the ball down for Carl McHugh. McHugh then sent a long ball forward for David Williams, who had a stretched defence to attack. Williams expertly controlled it, before chopping inside past two defenders and finishing in style. In this manner, ATK Mohun Bagan’s new formation allowed them to gain control of the match.

While ATK Mohun Bagan certainly did well, Bengaluru FC didn’t help themselves in any way as their performance was very bland. The first of their problems was on the left flank, where they were missing the injured Ashique Kuruniyan. Rahul Bheke deputised for him, but being a right-footed player, he failed to do any of the attacking work that Ashique usually did in the left-back role. The stats prove it – against NorthEast United, Ashique attempted 8 crosses, made 6 dribbles and drew 3 fouls, a stark contrast from Bheke’s 2 crosses (none of which were accurate) and 0 dribbles. Usually, this is how things work on the Bengaluru left. Ashique pushes way up the flank, almost becoming a winger and allowing Sunil Chhetri to drift inside and take a position more similar to that of a striker. Thus, the Indian captain can get on the end of crosses and cause damage from shooting positions. Rahul Bheke, predominantly a right-footed centre-back, failed to get ahead like Ashique, which in turn meant that Sunil Chhetri wouldn’t find any joy in drifting inside. Since the veteran forward isn’t adept at darting up the flank and crossing, this basically meant that Bengaluru couldn’t possibly attack from the left. On the opposite flank, Bengaluru had Udanta Singh as Cleiton Silva was pushed inside. However, Subhasish Bose contained the Indian winger expertly, allowing him to take just 14 touches in the first half, after which he was brought off. Bose stayed tight to Udanta throughout the match, preventing him from using his pace to burst past him at any point. Since Harmanjot Khabra is not a very attack-minded full-back, he couldn’t support Udanta with overlapping runs either, blocking the right as well for Bengaluru. Lastly, the Blues had Cleiton Silva in the number 10 role. However, he couldn’t influence the game either, since he was ineffective in chasing the long balls down and was playing out of position. All of this meant that Bengaluru FC couldn’t do anything substantial in way of attack in the first-half bar set-pieces, which were well-defended by ATK Mohun Bagan.

Both sides made some slight changes in formation in the second period, as you can see below. ATK Mohun Bagan went back to the 4-1-4-1 they used last time out, with the wingers pulling back from the press. Bengaluru FC made some more notable changes, though, as Suresh Singh Wangjam replaced Udanta Singh and moved it midfield, allowing Cleiton Silva to go back to his natural position on the right wing and forming a 4-3-3. Bengaluru’s changes created some more openings for them, as Cleiton’s impact grew on the right, while Wangjam provided an extra presence in the box. However, the Blues didn’t make the rare openings count, and that’s what they ended up paying for. However, for most of the half, it was ATK Mohun Bagan’s tweak that prevailed, as they defended in their disciplined 4-1-4-1 and didn’t allow Bengaluru to create too many chances. In this manner, ATK Mohun Bagan countered Bengaluru FC’s change in formation, coasting their way to three points in the end.

Antonio López Habas has done it again – he has been proactive with his tactics and caught his opposite number off guard. ATK Mohun Bagan’s minor changes won the day for them, while Bengaluru and Carles Cuadrat got more problems than positives from this match. They are clearly going to miss Ashique Kuruniyan, and by the looks of things, Rahul Bheke isn’t the solution to that problem. In truth, the Blues looked a bit clueless in this match, as they didn’t seem to have a plan to face ATKMB’s possession-based style in the first half in particular. This was another typical 1-0 win for ATK Mohun Bagan, who surely have to be considered strong contenders after multiple tactically sound performances. Stats courtesy sofascore.com
Join our Telegram channel to stay up to date on the latest in marketing