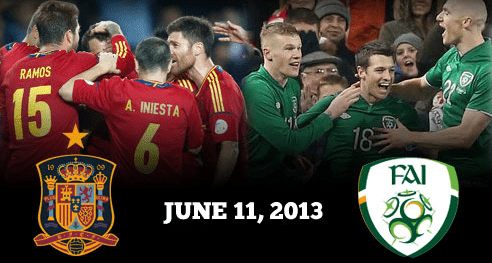 Football fans in New York are set to be spoiled this summer, with two high-profile games to be played at the Yankee Stadium in the European off-season. Chelsea and Manchester City are set to do battle on May 25th, and the first international fixture at the historic stadium is set to be played between world champions Spain and Ireland on June 11th.

The current Spain side will go down as one of the best team’s to play the international game in recent times, and will enter the 2014 World Cup looking to win their fourth straight competitive tournament. Vicente Del Bosque’s men have won successive European Championships, and the World Cup in South Africa in 2010, and have some of the best players in the world game in their talented squad.

For American east-coast fans of Spain and its two top club sides Barcelona and Real Madrid, this fixture is a once-in-a-lifetime opportunity. The chance to see the likes of Iker Casillas, Xavi, Xabi Alonso, Cesc Fabregas, Andres Iniesta and many more up close will be offered, and is something that a high percentage of American fans may never get the opportunity to do.

This Spain side will enter the World Cup next year as one of the favourites, however the core of their successful side is starting to age. The likes of Alonso, Xavi, Iniesta and others may well play their last major tournament next year in Brazil, and as such the shelf life to be able to see these stars before they retire is limited.

Republic of Ireland were beaten comprehensively 4-0 by Spain the last time the teams met, at Euro 2012. Giovanni Trapattoni’s men will look to fare better this time rounds, and will hope that LA Galaxy star and captain Robbie Keane can get the goals to potentially forge an upset.

The Emerald Isle are caught up in a tough World Cup qualification campaign, and have a handful of games left to try and force their way into contention for inclusion in the competition in Brazil. Group C is being dominated by Germany, with Ireland fighting it out against Austria and Sweden to secure the runners-up berth.

With crucial games left to play, Ireland will take the friendly game against Spain seriously and look to record a positive result.

Tickets for this exciting clash will go on sale to the general public this Thursday at 10am EST, with strong interest in the clash expected. To assure your place at the game to buy tickets at www.yankees.com/soccer.