[Note: PREVIEW of the match here]

Fenerbahce have a key Champions League Group G match against CSKA Moscow on Wednesday night, but before then, the reigning Turkish champions had to take care of some business domestically, as they took on bitter rivals Galatasaray in round 15 of the Turkcell Super Lig, in Soccerlens’ Match of the Week.

Fenerbahce hadn’t lost a home match to Galatasaray since 1999, and that streak did not come to an end today, as the home side strolled to a 2-0 triumph, which tightened the gap at the top of the league standings and gave Fener some big-time momentum heading into their home tie with CSKA.

Less than five minutes in, some fans were no doubt still getting settled into their seats, which might have made it easy to celebrate an early lead for Fenerbahce. Semih Senturk continued his impressive start to the season by scoring in the fifth minute to put Fener 1-0 up and send the Sukru Saracoglu crowd into a frenzy.

The move started with a Fenerbahce throw-in on the right flank, just inside Galatasaray’s half. It was headed down by Senturk right into the path of Brazilian midfielder Alex, who chipped the ball over the Galatasaray backline right back to Senturk, who had broken away from his marker. He took the bounding ball near the six-yard box and fired it through the legs of the on-rushing keeper, and into the net at the far post for his sixth league goal of the season. 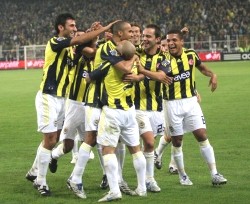 That lead would hold up through the remainder of the first half, and it would be doubled in the 56th minute, and it came as the result of another set-piece – and a little bit of good fortune.

Fenerbahce had a dangerous free kick outside the Galatasaray area, and it was taken by Roberto Carlos. When the diminutive Brazilian struck the ball, the defensive wall leapt, expecting the ball to come rocketing goalwards, but instead, it went low, took a deflection left off of a Galatasaray defender and to an unmarked Deivid, who unleashed a low shot that the surprised ‘keeper and no one else had the slightest chance of touching.

Deivid would be sent off 20 minutes later for an incident with Galatasaray’s Hakan Balta, but that wouldn’t dampen the glory for Fenerbahce, who kept their rivals off of the score sheet and deservedly took all three points by the 2-0 margin.

The victory continues Fenerbahce’s recent dominance over Galatasaray – it was the Canaries’ 7th win in 8 matches against their city rivals, and the 6th straight league win over them dating back to a 1-0 away defeat in December 2004. There was no doubt a little extra joy in today’s victory, as it was Galatasaray’s first defeat of the league campaign after 14 matches without one.

More importantly, it closed the gap at the top of the Turkcell Super Lig after round 15. Galatasaray, stuck on the 32 points they came into today’s match with, are still only one point ahead at the top, but could be overtaken if Sivasspor can take all three points from Denizlispor tomorrow. For now though, Fenerbahce and Sivasspor are both on 31 points, but Fenerbahce are in second spot on goal difference. Istanbul’s other major club, Besiktas, are now 4 points behind in 4th after picking up a 1-0 win at Bursaspor ahead of their must-win Champions League Group A clash with Porto. (League Standings courtesy of Sportpress) 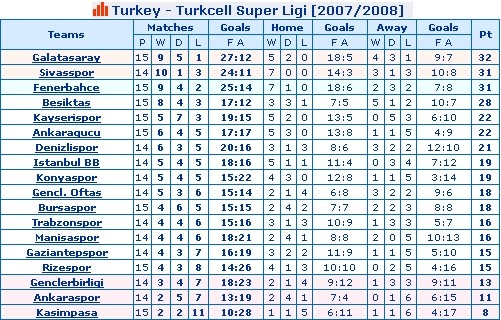 This win is just the kind of momentum that Zico and Fenerbahce need to have with one of the biggest matches in their history coming up, and if they can repeat today’s effort against CSKA, they will get the three points they need to assure a place in the Champions League round of 16.

As for Galatasaray, Karl-Heinz Feldkamp‘s side must refocus themselves after seeing their unbeaten league start come to an end and try to remain on track at the top of the league, and get ready for a big UEFA Cup clash with Austria Vienna in two weeks’ time.

The clubs will meet at Galatasaray’s Ali Sami Yen Stadium on April 27th in round 32 of 34, and that one will likely play a part in the title race if the standings remain as tight as they currently are.

But, until then, the bragging rights are all with Fenerbahce, who aren’t going to lose their place as Turkey’s current top club without a serious fight, and if Galatasaray didn’t know that already, they certainly do now.