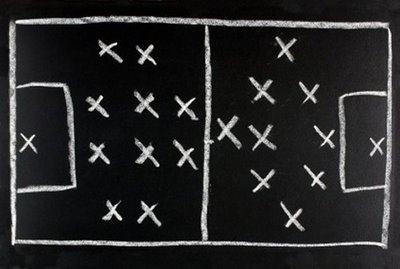 When playing our weekly Soccerlens Fantasy Football Game you have four different formations to choose from: 4-4-4-2, 4-3-3, 3-5-2 and 4-5-1. The classics, if you will. The formation you select has a huge effect on how your team will perform that week and on how much of the weekly prize money you’re going to win. No one formation is necessarily better than the other, so below you’ll find arguments for and against each formation and how they relate to the Soccerlens Fantasy Football points system.

Moderation in all things.

Pros: It’s the “eat your vegetables” of formations. Plenty of defenders, plenty of mids and just enough forwards to provide a goal threat. In fantasy football this means you’re spreading the risk. No area of your team is under-served and you’re getting potential points from every position.

Cons: The downside with spreading the risk is that you then need to score points in all areas. If either your defence, midfield or strikeforce has a bad weekend then it’s enough to ruin your points tally and keep you out of the prize money.

Light in midfield, heavy on the strikers.

Pros: Unlike Jose Mourinho’s version, fantasy 4-3-3 is essentially all out attack with three strikers. If you choose wisely and have three strikers getting multiple goals and assists then it’s going to rain points and push you into that prize-money-tastic top three.

Cons: The downside is that goals from strikers are only worth three points (midfielders’ goals are worth four and defenders’ are worth five) and even the most reliable of strikers can have an off day. A forward trio of Didier Drogba, Fernando Torres and Wayne Rooney might sound good in theory, but if it only yields one goal between them then you’re out of luck.

It comes in and out of fashion, but if you like midfielders this is for you.

Pros: Midfielders are arguably the biggest point scorers in the game. Four points per goal (strikers only get three) and thee points per assist. So if you can find five productive attacking midfielders – guys like Florent Malouda, who has six goals already – then you can have huge success in midfield and still field two forwards.

Cons: The obvious downside – in both real and fantasy football – is the lack of defenders. Goals from the back are worth five points and clean sheets four points. So you need to be pretty confident that the three defenders you do pick will perform, or that the extra midfielders and strikers are worth the trade-off.

Not as defensive as it sounds.

Pros: The five midfielders approach offers the same benefits as the 3-5-2. The big thing with 4-5-1 is that you’re trading a striker for an extra defender. This might feel cowardly, but all depends on who you select. Find some goalscoring defenders (like Gareth Bale or, more recently, Zat Knight) and it’s five points per goal, as opposed to three points per goal that forwards get.

Cons: There’s a reason goals from defenders are worth so much, and it’s because they don’t score all that often. Also, this formation will leave you in an Alex Ferguson-esque rage when that striker you left out to play 4-5-1 scores a hat-trick and helps someone else wins your mini-league.

Hopefully you’ve worked out by now that there’s no correct formation. Well, maybe 4-5-3, but unfortunately that’s not an option. The smart thing to do is to go on a week by week basis and adapt your formation as you go. For example, if you have three strikers that you predict will all get goals this coming weekend, then go 4-3-3. If next week you don’t fancy those strikers then go 4-5-1.

Gameweek seven is coming up, so sign up for Soccerlens Fantasy Football, choose your level of play ($4.99 for Silver level with $40 prize money, $9.99 for Gold with $80 prize money, $24.99 for Platinum with $200 prize money) choose your formation and then pick the eleven players you think will win you the prize money.