The 44th Europa League final takes place tomorrow with Spanish La Liga side looking to defend their title and win the competition for a record fourth time.

Dnipro Dnipropetrovsk are looking for their first major European honour in what will be their first final. The Ukrainian side have not won any domestic honours since the split of the Soviet Union, with their last trophy being the 1989 Soviet Cup.

Sevilla finished their domestic season on Saturday with back-to-back wins but could only settle for a fifth place finish. Nevertheless, Sevilla remain the bookmakers’ favourites in the Europa League betting tips and despite a few injuries, Emery’s side are well-equipped to lift the title once again.

Dnipro’s win over Shakhtar Donetsk on Saturday gives them a prayer of finishing in the UEFA Champions League places ahead of this weekend’s final round of matches – but this match is likely to be the only way into the Champions League for either of these two teams next season.

Last season’s hero in the penalty shootout win over Benfica, Beto, will likely miss out on a place in the starting lineup for this season’s final having only recently returned from injury.

Centre-back Nicolás Pareja ruptured a cruciate ligament last month and isn’t due back until late October.

Defender Ondřej Mazuch is out of the final due to a knee injury.

Midfielders Roman Zozulya and Sergiy Kravchenko are both out for the Ukrainian side but head coach Myron Markevych has the starting XI that beat Napoli in the semi-final second leg all available to him on Wednesday. 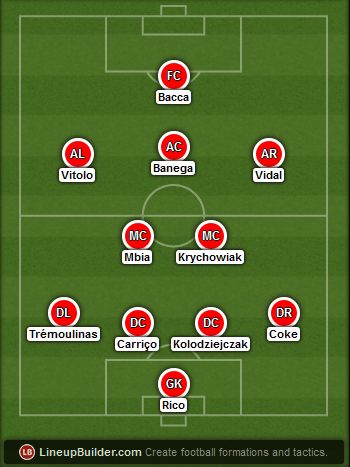 Unai Emery plays the 4-2-3-1 formation and has a lot of depth in his squad. Carlos Bacca is the 20-goal hitman from La Liga this season, whilst he is backed up by Kevin Gameiro. Vitolo chips in with a few goals from the left wing whilst Alex Vidal scored twice from right-back in the first leg of their semi-final win over Fiorentina – the Spaniard usually lines up on the right wing. Éver Banega and Grzegorz Krychowiak usually see most of the possession in midfield, whilst ex-Queens Par Rangers flop Stéphane Mbia has a surprising three goals from midfield in this season’s competition. 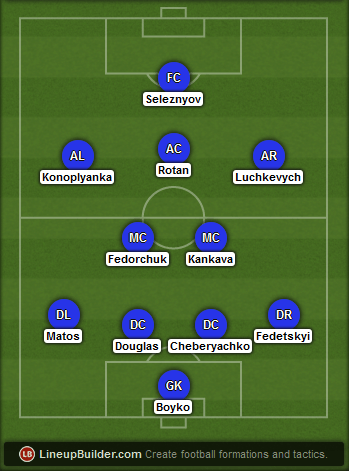 Dnipro play a similar formation and have been able to grind out results in the knockout stages after picking up only seven points from six group games on their way to the final. Markevych’s side are fully committed and have good discipline. They’ll be looking to score on the counter attack and with Yevhen Konoplyanka on the left they have a forward capable of producing moments of magic.

Carlos Bacca vs Dnipro defence
The Colombian striker is having another excellent season up front. Enjoys racing onto through balls but may not have too many opportunities to do so in the final should the Ukrainian side sit back. Carlos Bacca is lively in and around the six-yard box looking to get onto cutbacks so the Dnipro centre-backs will certainly have their work cutout in this game.

Yevhen Konoplyanka vs Coke
We’ve seen some magic from the Ukrainian forward in this competition over the past couple of years, as well as for the national team including a cracking strike to open the scoring at Wembley versus England in the opening qualifying match for the 2014 World Cup. Coke, and Timothée Kolodziejczak will have to be alert all evening when Yevhen Konoplyanka is on the ball, particularly when he cuts inside looking to shoot from outside the penalty area.

Aleix Vidal vs Leo Matos
If Dnipro set up defensively, Sevilla will be looking for their playmakers to create that one moment that could be the match winner. Aleix Vidal could be that man as he creates a lot from the right wing and is also somewhat of a goalscoring threat too. Support from the right-back will see the Spanish side put crosses into the box. Éver Banega will also provide support to collect short passes. Leo Matos has been solid at left-back recently for the Eastern European side.

3 – Sevilla are the current joint-record winners of this competition, along with Juventus, Internazionale and Liverpool, winning the competition in 2006, 2007 and 2014.

50 – Dnipro have received the most cards in this season’s competition (49 yellow, 1 red). Dynamo Kyiv are next on the list with 35.