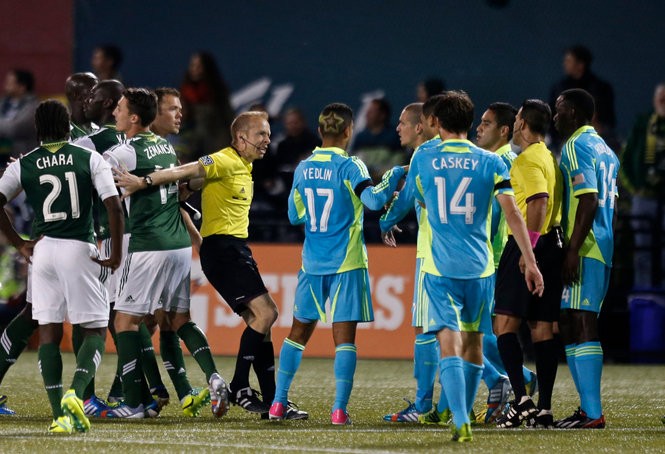 It would be hard to convince me that the Portland Timbers players and coaches wanted to play the Colorado Rapids in the Western Conference Semifinals. Sure, Portland would have dispatched the flimsy Rapids and swung into the Conference Final, but that could only have meant so much. A playoff series against Seattle, in the most heated year of the most heated rivalry in America ever has a magnetic pull that engulfs everyone surrounding the two clubs. If the Timbers beat Seattle – that plastic club, built with money, playing on the gridiron lines in the American football stadium, the darling of MLS – then all the Portland players will be legends forever. No pressure then.

Here’s another reason Portland wants Seattle right now: They can win. After doing the the cliche and “throwing the records out for the rivalry!”, let’s throw them back in: The Timbers are on a different planet right now than the Sounders. While Seattle hadn’t won in seven games to end the regular season, Portland hadn’t lost in seven games. While the Sounders leaked goals, went through a goalkeeping controversy, and generally behaved like soccer games were bar fights, Portland’s defense was the best in the league, backed by the best ‘keeper, and fueled with focus and smarts.

There’s another thing too – Portland is under no pressure compared to what Seattle is facing. Sigi Schmid knows he may be sacked if the Sounders don’t win. He’s coaching for his life, while Caleb Porter just signed a five-year contract extension. Seattle’s the team with Dempsey, and Seattle is the team that has made the playoff five straight years, and been knocked out in the West Semis three times, and the West Final last year. While it could be the end of an era at CenturyLink, it’s the beginning of an era at Jeld-Wen.

Anyone who characterizes this matchup as big brother – little brother is characterizing it correctly, at least since Seattle joined MLS in 2009. The Sounders have dominated on the field. They’ve had better players, they’ve had better coaching, they’ve never missed the playoffs, and they hit the ground running in MLS in a way Portland certainly didn’t. Even this year, when things were tight, Seattle was still getting the cool toys – Clint Dempsey – over Portland’s objections.

Now Seattle is desperately clinging to their perch atop the Cascadia world. Winning this semifinal against Portland would redeem the entire season, while losing it could spark big changes in Seattle. Schmid knows he may be coaching for his job. It appears the Sounders have righted the ship somewhat with their Wild Card victory over Colorado, but they even tried to self-destruct in that game too – Michael Gspurning ran two yards out of his box and caught the ball in his hands, a shocking offense for which he was sent off. Marcus Hahnemann, then, will be Seattle’s keeper against Portland. You just can’t shake the feeling that they’ll beat themselves by doing something stupid.

It’s important for Seattle to play up to their ability. They have one of the most talented teams in MLS. But will it look like a team handed a gleaming second chance, or a big brother desperately fighting off a growing little brother with little success.

Against Seattle this year, it’s been desperately close to call. In three games, the aggregate score is 2-2, and both teams have hit the post three times. There has been one draw, one win Seattle, and one win for Portland. It’s going to be close. You’d fear blood too – not in the stands, but on the field. Most likely, there isn’t going to be any space in leg one at CenturyLink Field. You would expect nerves in the first twenty minutes, and that’s where Portland’s experienced and compact back seven should play a powerful role.

We’ll see how true Caleb Porter is to his premise that the Timbers play to win every game, because a draw is more than good enough at the CLink. 0-0, 1-1, 2-2, whatever, but with the way Portland’s defense is playing, it’d be easy to sit back, absorb pressure, and get Seattle frustrated, which should only take, oh, three minutes. The Timbers will line up in their 4-2-3-1, and every spot but the one up top is taken. Max Urruti is most likely going to be unavailable with a hamstring injury, so Ryan Johnson (the most goals), Jose Valencia (been starting recently), or Frederic Piquionne (best overall player), could start at the point. While I’m not sure this is the right move, I’d expect Valencia – Porter likes his direct style, and hasn’t been shy about going with young players in big situations in the past. But it’s really anyones guess, and an important one too: Not only has a Portland forward never scored in an MLS game in Seattle, Ryan Johnson’s poor finishing cost the Timbers their last game at CenturyLink.

Look for Seattle to deploy Sigi’s favorite new diamond midfield, which good for getting Clint Dempsey free, and letting Osvaldo Alonso play the destroyer role in the back of the formation. On the sides of that diamond are Brad Evans – who said in a recent issue of Sports Illustrated that he’d like to get in an octagon with Will Johnson – and Adam Moffat, a former Timber now only adept at shooting from long distances and complaining to the referee.

The Sounders face two huge fitness dilemmas – DeAndre Yedlin rolled his ankle at the end of the first half against Colorado, and Obafemi Martins has been out long-term. It’s unclear if either player will be available for Saturday, and both would be massive absences. Seattle hasn’t been the same team without Martins, quietly their top player this year, and Yedlin is one of the top full-backs in the league. Seattle need to win at home, so that diamond will most likely be pushed up the field, and Dempsey will be allowed to roam, wreck havoc, and throw his wrist-tape.

In any case, these games are almost always claustrophobically tight, with the game being decided on one or two mistakes.

Darlington Nagbe v. Osvaldo Alonso – Nagbe has more potential than anyone on the field to take over the match. It will be Alonso’s job to try to prevent that, and he may use brutal force. Referee Baldomero Toledo will have to protect Nagbe, and Dempsey as well.

Seriously though, Seattle, the gridiron lines? What is this, 2001? The game is going to be borderline unwatchable, the more distracting equivalent of a football game being played on Boise State’s blue turf. It’s embarrassing. Also, Vancouver have declared their allegiance (Portland), and gotten a couple of shots in as well.

So @SoundersFC and @TimbersFC set to determine best team in the Pacific Northwest. Oh wait, that's what this is for.. pic.twitter.com/CnquWlYPfk

Close, tight game. Toledo’s refereeing performance will be key, but look for him to clamp down on the bad tackles early. He may even book Alonso. A 1-1 draw seems about right.