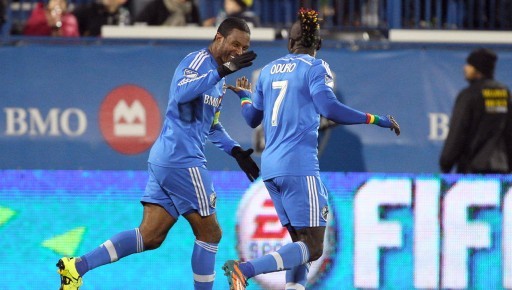 DC United faced off against New York Red Bulls in one of the Eastern Conference matchups. New York came into this game as favorites and did not disappoint as they won the game 1-0 as the away team. New York dominated possession and had double the amount of shots as DC United. It did take 72 minutes for New York to find the back of the net with Dax McCarty scoring the goal. New York will be confident going into the next leg against DC United, as the game will be played in New York. New York were the only team to get an away win in the first leg of games and they look like favorites to take home the trophy in December.

The second Eastern Conference match was between Columbus Crew and Montreal Impact. Columbus Crew got the opening goal in this fixture thanks to a poor headed clearance that fell straight to Federico Higuaín. Montreal were quick to respond as Patrick Bernier leveled the score just 4 minutes later. It looked as though the game may end as a draw, but substitute Johan Venegas scored in the 77th minute, giving Montreal the victory. This is Montreal’s first appearance in the MLS playoffs and they continue to prove that they are contenders every single game.

The first Western Conference matchup was between Portland Timbers and Vancouver Whitecaps. The first leg of this matchup, played in Portland, finished in a 0-0 draw. Vancouver now have the advantage in the next leg which will be played at their home stadium. Portland dominated possession of the ball, but they could not find the back of the net. Vancouver’s goalkeeper, David Ousted, had a great performance, making 6 saves in the match. The final conference semifinal game was played between Seattle Sounders and FC Dallas. Seattle were coming off of an amazing 3-2 victory over LA Galaxy, and Dallas were the number 1 team in the Western Conference before the playoffs. Dallas got off to an early lead with a goal in the 18th minute. Seattle rallied back in the second half with a goal in the 67th minute by Andreas Ivanschitz. Seattle Sounders completed the comeback in the 86th minute with Clint Dempsey scoring a free kick, making the score 2-1.

The second leg of the conference semifinals will be played on Sunday, November 8th, where the 8 teams that currently remain will be cut in half to just 4. These 4 clubs will then play in the conference finals to determine who will advance to the MLS final on December 6th.