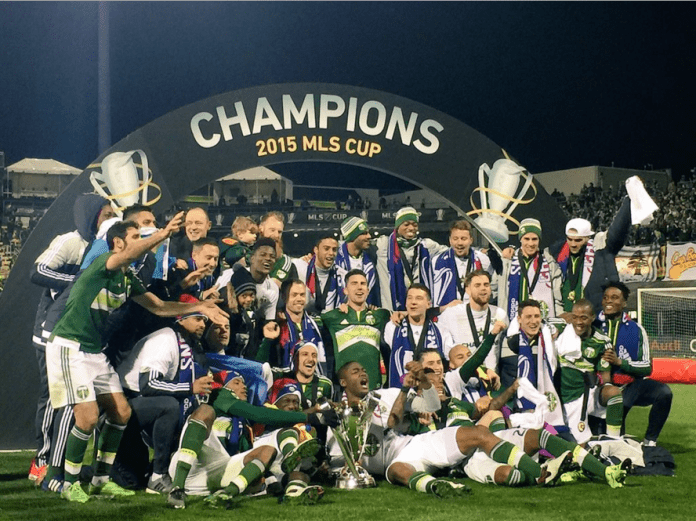 Portland Timbers stunned the majority home support at the Mapfre Stadium in Columbus as they ran out 2-1 winners in a chaotic MLS Cup Final against Columbus Crew. All the goals were scored inside the first quarter of the game, with Portland Timbers’ midfielder Diego Valeri scoring the fastest ever MLS Cup Final goal in the 27th second to throw any Columbus Crew home advantage out of the window in the opening minute.

Huge blunder from Columbs GK 30 seconds in to give Portland lead in #MLSCup final. https://t.co/iOH2gbPaC1

Timbers doubled their advantage in the sixth minute, with a Rodney Wallace headed goal testing the home crowd’s patience. Wallace’s celebration was cut short by the Columbus Crew fans as they hurled beer cans at the winger as they were left stunned by the early two goal lead of Portland. Aside from beer cans, the furious Columbus fans threw a flag and other assorted objects on the Portland Timbers players.

And a second for the Timbers, this time from Rodney Wallace. #MLSCup https://t.co/Fk6aKUdNm3 — Howler Magazine (@whatahowler) December 6, 2015

Columbus Crew reduced the deficit in the 18th minute following a strike from top scorer Kei Kamara, whose low shot evaded almost everybody on its way to finding the back of the net. The goal was Kamara’s 26th of the season, but it was to be the last of the game as there were no more goals with Portland Timbers holding on for the win.

Goals, goals and more goals during the #MLSCup! The Crew answer a Portland pair with one of their own on ESPN. https://t.co/Cch4Oh8M5A

The second half was relatively less chaotic compared to the first half, but there was one moment of controversy from a Portland attack. A Portland shot bounced off the crossbar and hit Michael Parkhurst’s hands, which prevented the ball from going in, but referee Jair Marrufo waved play on and saved Columbus further blushes.

The game ended 2-1 to Portland, handing them their first ever MLS Cup, while dashing Columbus Crew’s hopes of becoming the MLS champions for the second time in their history. Kamara’s dejection at the final whistle was clear as the Sierra Leone striker sat on the pitch for more than 10 minutes, with the Crew faithful cheering his name.